Accessibility links
Backcountry Mail Route Back In The Air The U.S. Postal Service will maintain airmail plane service to several addresses scattered across Idaho inside the Frank Church-River of No Return Wilderness. Postmaster General John Potter said none of the alternatives "would provide acceptable service levels to our customers." 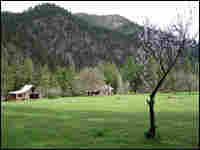 A pear tree blooms this week on the Campbell's Ferry Ranch in Idaho, which will continue to receive mail by bush plane on the last backcountry airmail plane route in the lower 48 states. Doug Tims hide caption 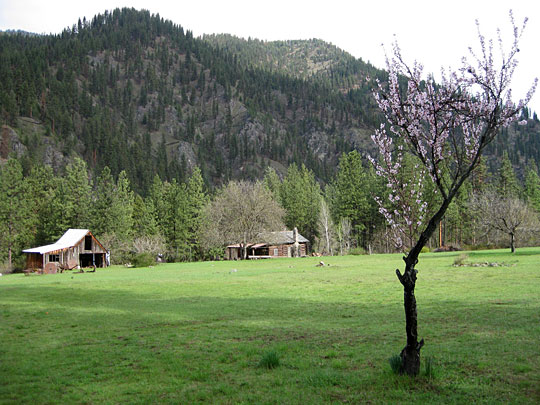 A pear tree blooms this week on the Campbell's Ferry Ranch in Idaho, which will continue to receive mail by bush plane on the last backcountry airmail plane route in the lower 48 states.

Doug Tims won't have to mount a major expedition just to retrieve his mail.

Beginning in June, the co-owner and caretaker of a remote and historic ranch in central Idaho's wilderness faced a rugged three-day hike up and over snowbound mountains 7,000 feet high to get to the free post office box the U.S. Postal Service promised to provide.

Or, he could hike 4 miles, then drive 6 bone-jarring miles up a rough road hugging a canyon wall, and then continue driving more than 250 miles — to get to the same post office box.

That's what the Postal Service offered as an alternative when it canceled the last backcountry airmail plane service in the lower 48 states. The $46,000-a-year route in the Frank Church-River of No Return Wilderness was cut as part of the agency's effort to trim a $6 billion deficit.

But the plan proved embarrassing to the Postal Service.

Postmaster General John Potter reversed course in a letter acknowledging that none of the alternatives to the mail plane route "would provide acceptable service levels to our customers." The weekly (every two weeks in winter) deliveries will continue.

Twenty ranches and lodges and a university research station are affected, including the Campbell's Ferry Ranch co-owned by Tims.

"If Idaho was canceled, who was next?" Tims asks. "What about all of the nonprofitable rural mail delivery in America?"

The postmaster general's reversal came Thursday just before he was scheduled to meet with the Idaho congressional delegation. In an earlier letter, Idaho Sens. James Risch and Mike Crapo quoted Potter's January testimony before a Senate subcommittee.

"We must serve every customer and every community equally," Potter testified. "We must provide the same access ... in both easy-to-serve locations and locations so remote they can only be reached by mule, by swamp boat or by bush plane."

Shortly after that testimony, the postal service announced an end to the last bush plane mail service in the lower 48 states. Potter seemed to be defying his own promise to Congress, and he was making it virtually impossible for some Americans to get their mail, all to shave the Postal Service deficit by .0007666667 percent, or less than one-thousandth of one percent.

"The post office has said that they're going to deliver mail to all Americans everywhere," explains Brad Hoaglun, a senior policy adviser to Risch. "We thought they ought to live up to what they said they were going to do."

In his letter announcing the reversal, Potter conceded the point, writing "...in view of the obligation to provide service to the American public, this contract should continue in its present form."