Accessibility links
Perilous Passion: Tchaikovsky's 'Mazeppa' Historic upheavals, a perilous romance, a father's death and a daughter's madness are all wrapped up in one of Tchaikovsky's most intimate, and passionate operas.

From the Flemish Opera in Antwerp

Chained in a dungeon and facing torture, Kochubey (bass-baritone Mikhail Kit) reflects on the merits of a principled life, in the aria "So this is what I've lived for ..."

A big moment for Mazeppa (baritone Nikolai Putilin) comes in the middle of Act Two. He has just ordered Kochubey's execution, and worries about Mariya's reaction in a pensive number known as "Mazeppa's Aria."

In 1965, director David Lean came up with a movie that's essentially a three-hour flashback, recounting a bittersweet romance frustrated by political complexities during Russia's October Revolution. And while that formula may not seem like the stuff of a Hollywood blockbuster, that's exactly what the film was. Lean's Doctor Zhivago was nominated for 10 Academy Awards, and won five. 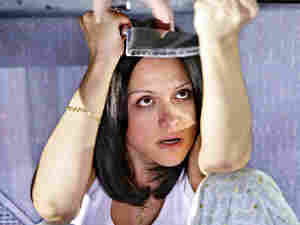 Faced with her father's death — at the hands of her husband — Mariya threatens to take her own life, in Tchaikovsky's Mazeppa from Antwerp. Annemie Agustijns/Flemish Opera hide caption

In fact, the film's runaway success may not be all that surprising. Epic stories of troubled times in Russian history have been a winning formula for a long time. There were the astonishing, early 20th-century films of Sergei Eisenstein, such as The Battleship Potemkin and Ivan the Terrible. In the 19th century, opera houses staged sprawling, Russian epics such as Mussorgsky's dark psychodrama Boris Godunov and Borodin's spectacular Prince Igor.

Then there's the long tradition of historical epics in Russian literature, which inspired many of those films and operas. Doctor Zhivago was based on a novel by Boris Pasternak. Mussorgsky's Boris had roots in a tragedy by Alexander Pushkin. And it was another work by Pushkin that inspired Tchaikovsky's intense drama Mazeppa — another story of romance disrupted by violent events in Russian history.

Tchaikovsky's opera, and the poem by Pushkin that inspired it, are both based on a real life historical figure. Ivan Mazeppa was an influential leader early in the 1700s. He was the "hetman," or military ruler, of a Cossack people in what is now the western part of Ukraine.

Early in the 1700s, Mazeppa struck an alliance with King Charles of Sweden, and led a Ukrainian revolt against the Russian czar, Peter the Great. Whether Mazeppa was a heroic patriot or a notorious traitor depends on your point of view — and that dispute also plays a role in the opera. In any case, Mazeppa's ploy backfired. He was defeated by the Russians at the historic battle of Poltava, from which Pushkin's poem takes its name.

Both the poem and the opera also feature another, more personal event in Mazeppa's life: a decidedly operatic, May-December romance between the elderly Cossack general and Mariya, the young daughter of a man Mazeppa condemns to death.

On World of Opera, host Lisa Simeone Tchaikovsky's blockbuster from the Flemish Opera in Antwerp, with bass Nikolai Putilin in the title role and soprano Tatiana Pavlovskaya as Mariya.

The Story of 'Mazeppa' 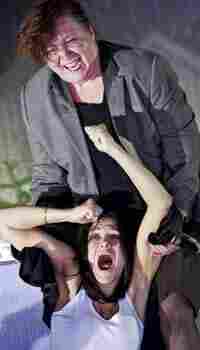 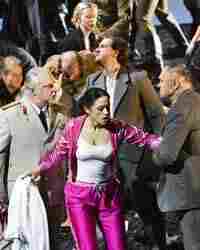 ACT ONE begins in the garden of Mariya's home, where she's talking with a few friends. Left alone, Mariya reveals that she's in love with Mazeppa, even though he's old enough to be her father. And there's another complication: A young Cossack named Andrei is head over heels for Mariya. But when he shows up to plead his case, she turns him away, and he leaves disappointed.

Mariya's father Kochubey comes into the garden, along with his wife Lyubov and Mazeppa himself. Mazeppa tells Kochubey that he wants to marry Mariya. Kochubey doesn't much like the idea, and the two men argue. Angrily, Mazeppa says that his men will carry Mariya away by force if it comes to that. But Mariya tells her father that she loves Mazeppa, and she leaves with him willingly.

In the next scene, Kochubey plans to get even. He knows that Mazeppa is about to join with the Swedes against Russia, and decides to reveal Mazeppa's plan to the czar. Andrei asks to be sent as Kochubey's messenger to the czar's court, and the people denounce Mazeppa as the act ends.

As ACT TWO begins, Kochubey is in a dungeon suffering interrogation by Mazeppa's henchman Orlik. Orlik knows that Kochubey is a rich man, and demands to know where his money is hidden. Kochubey refuses to talk and Orlik calls for a torturer.

Meanwhile, Mazeppa is in his palace pondering the situation. Mariya doesn't know that he has taken her father prisoner, and Mazeppa worries about how she'll react when she finds out. Orlik arrives, and when he tells Mazeppa that Kochubey has refused to give up his treasure, Mazeppa orders Kochubey's execution.

Mariya joins Mazeppa, and wonders out loud about his obvious distress. He describes his dangerous plan to defy the czar and fight for Ukraine's freedom, and Mariya says she's willing to die in his cause. Mazeppa wants to know what she would do if he and her father wound up on opposite sides of the conflict. Out of love, Mariya says she would stand with Mazeppa.

When Mazeppa leaves, Mariya's mother Lyubov quietly enters. She tells Mariya that Kochubey has been condemned to death, on Mazeppa's orders. While this news is sinking in, they hear the execution ceremony beginning and the two women rush off, hoping to stop it.

At the execution platform, a noisy crowd has gathered to observe the beheadings. Just as Mariya and Lyubov arrive, the axe falls.

ACT THREE opens with a bombastic orchestral interlude depicting the historic battle of Poltava. The battle goes badly for Mazeppa, and his army is routed.

When the fighting ends, Andrei enters the garden of Mariya's family home, seeking refuge. Mazeppa and Orlik also appear. They've escaped the battle and are now on the run. When Andrei confronts Mazeppa the two draw swords, and Andrei is mortally wounded.

It's late at night, and by the moonlight the men see Mariya coming from the house. Her father's death and the bloody battle have been too much for her, and her condition is revealed in a poignant mad scene.

Mazeppa is still in love with Mariya and he's clearly moved. But Orlik knows they're in danger and persuades Mazeppa to move on, leaving Mariya behind.

Mariya finds Andrei lying on the ground, near death. In her delusional state she sees him as a small child, and she sings him to sleep as the opera quietly ends.