Accessibility links
Flu Heads South For The Winter Since ancient times, the flu has been one of the most predictable seasonal diseases. It strikes regularly from November to March in the Northern Hemisphere, and from May to September in the South. Scientists are still struggling to find out why flu is seasonal and why it spreads faster in colder weather. 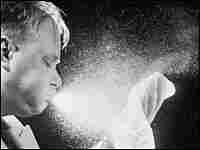 A sneeze recorded at high speed. On average, droplets can travel between three to six feet, carrying flu and other viruses with them. Bettmann/Corbis hide caption 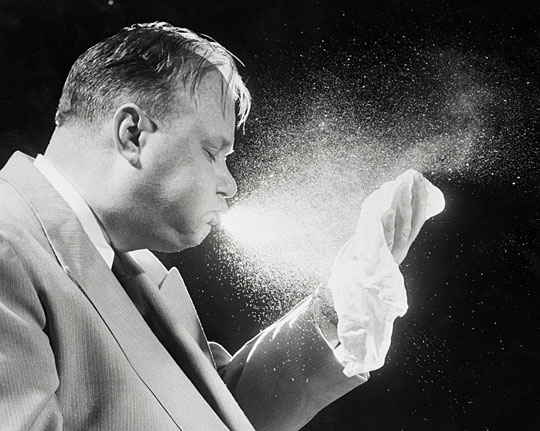 A sneeze recorded at high speed. On average, droplets can travel between three to six feet, carrying flu and other viruses with them.

A study of guinea pigs found that almost 100 percent became infected with a flu virus when the temperature dropped below 41 degrees Fahrenheit. The infection rate was much lower when it was warmer. Source: Peter Palese/Mount Sinai School of Medicine hide caption

It's autumn in Brazil, and the first cases of flu in the Southern Hemisphere's annual flu season are starting to show up.

"It worries me so much," says Dr. Evelyn Eisenstein, a pediatrician in Rio de Janeiro. "Because children go to the school even when they have a cold, you know? Parents don't stay with them. There is not the prevention culture that you have in the United States."

This year, there's special reason to worry. Eisenstein has no way of knowing whether her patients will get sick with the new swine flu virus she's been hearing about up North. Or if they do, how sick they'll get.

So far, only a few cases have shown up in Central and South America — in Costa Rica, El Salvador, Guatemala and Colombia. But Dr. Jon Andrus of the Pan American Health Organization expects many, many more as the southern winter takes hold.

"The winter months provide a situation where transmission is facilitated," Andrus says. "It's very logical when people gather, as they do in the winter months, and hunker down to stay warm. Those kinds of social conditions will contribute to virus transmission."

Why Is Flu So Seasonal?

Indeed, influenza is probably the most reliably seasonal of all diseases. Every year, flu epidemics strike from November to March in the Northern Hemisphere and from May to September in the South.

Despite this ancient pattern, scientists actually know surprisingly little about why flu is so seasonal. Dr. Peter Palese of Mount Sinai School of Medicine says the conventional wisdom — that people spend more time together in confined spaces, making it easier for the flu virus to transmit — is not the whole story, or perhaps even the main explanation.

"Some people over the years have postulated that it's the crowding of schools," Palese says. "But that really turns out to be not the determining factor."

Palese and his colleagues have conducted what flu experts consider the most telling studies of flu's seasonality. Since 2007, they have studied the transmission of flu between guinea pigs, which can get infected with human flu viruses.

"What we found specifically was that cold temperatures, around 40 degrees, and low humidity — exactly the conditions in temperate zones in winter — are much more favorable for transmission of flu," Palese says. "At 75 to 80 degrees, we don't see any transmission."

Equally important, the droplets of fluid that people (and guinea pigs) spray with each sneeze and cough are much smaller at lower temperatures and humidity levels. So these droplets carry much farther and stay suspended in the air longer.

The droplets also penetrate deeper into the respiratory passages and lungs when breathed in, Palese says.

"At higher humidity, the droplets become much bigger and sink to the floor," he adds.

"The mucous is much more viscous," Palese explains. That clogs up the tiny hairs, called cilia, that continually beat in waves to clear virus-laden particles out of the breathing passages.

But how do these findings square with the well-documented fact that schools are fertile breeding grounds for flu outbreaks? After all, classrooms aren't kept at 40 degrees.

"It's more likely that the virus is transmitted in hallways, maybe outside of school where people are waiting," Palese says. "It may occur on the way to school, or under conditions where it's a little bit colder."

Whatever the factors, this winter will be an especially tense time for the Southern Hemisphere. It will reveal whether the new flu virus is going to touch off the next serious flu pandemic, or fade away like the swine flu outbreak of 1976.