Accessibility links
Special Tools Required For Last Call To Hubble The Hubble Space Telescope is getting one last tuneup. Some of the planned repairs are especially tricky, so astronauts are bringing up 116 brand-new tools. 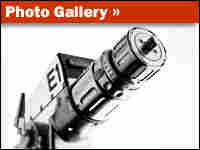 Take A Look Inside Hubble's Toolbox 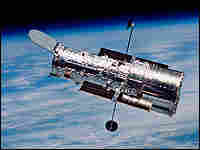 A view of the Hubble Space Telescope as it orbits Earth. NASA hide caption 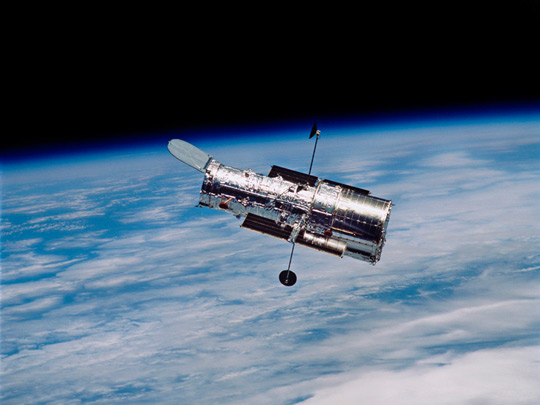 A view of the Hubble Space Telescope as it orbits Earth.

The right tools can make any job easier, and that will be especially true this week when the Hubble Space Telescope gets its last tuneup.

When space shuttle Atlantis blasts off Monday on the final flight to Hubble, the astronauts will be carrying 180 special tools, and 116 of them were designed just for this mission, which involves tricky repairs to two science instruments that were never intended to be fixed in space. Liftoff is scheduled for 2:01 p.m. EDT.

The Hubble Space Telescope was launched in 1990. It has been serviced four times before, with the last servicing mission occurring in 2002.

"Over the last few years, we've seen significant deterioration within the set of scientific instruments that we provide to the astronomical community," says David Leckrone, senior project scientist for Hubble at NASA.

He says that after this visit, if all goes well, Hubble should be more powerful than ever before.

Astronauts are scheduled to go on five spacewalks to give the telescope an upgrade that includes new batteries and gyroscopes, and additional science instruments.

But some of the most ambitious repair work involves "actually going into the very guts of instruments that have suffered failures that were never meant to be touched on orbit," says Michael Weiss, deputy program manager for Hubble at NASA's Goddard Space Flight Center in Greenbelt, Md.

'The Zero-G Would Get It'

The astronauts will have to open up two instruments and replace electronics cards. Taking off the cover of one instrument, a spectrograph, involves unscrewing 111 tiny screws.

So for years, astronauts have used a special power tool in space. NASA engineers have designed a smaller, faster version of it for this mission.

Even though losing a few screws isn't a big deal when you're assembling a bookcase at home, in space it is potentially a serious problem. A wayward screw could float up into the telescope and cause damage.

"So we have to figure out a way for the astronaut to remove these screws but not let them float away in space," explains Jill McGuire, who heads the team at Goddard that designs tools for Hubble. "You can't, you know, hold a little tiny screw like this with a big astronaut glove on."

A Busy Board For Astronauts

McGuire's team solved the problem by designing a "fastener capture plate." It looks like a colorful busy board that toddlers might play with.

It's designed to fit exactly over the panel that needs to be removed. Once it's on, the screws will be covered by little plastic boxes, or bubbles. There's a tiny hole above each screw, for the astronaut to insert the screwdriver.

"The bit can actually get through the hole, to access the fastener head, but the fastener cannot get back out through the hole," McGuire explains. The captured screws simply float in the little compartments. They don't have to be screwed back in, because the old instrument cover will be replaced with a snap-on one.

Tools For 'What If' Scenarios

Many of the tools in the astronauts' tool kits were developed for scenarios that might not even happen.

For example, the astronauts will replace batteries that have been up there since 1990. Ben Kennedy, an engineer who works with the tool team, developed a battery extraction tool, in case those batteries are stuck and the astronauts can't just pull them off.

Of course, if the batteries come off easily, the astronauts won't ever use the tool.

"I think I hope that they don't have to use it," Kennedy says. "It's stowed in such a configuration in the shuttle that I think it will be visible in a couple of pictures, and I'll just be happy enough with that."

If all the repairs and upgrades go well, Hubble should be more powerful than ever, and will be able to take beautiful pictures of the universe until at least 2014.

After that, if the telescope breaks, it won't be repaired, says Edward Weiler, head of NASA's science mission directorate.

He says NASA is getting ready to retire the space shuttle program, so there won't be a vehicle that can go to Hubble, and the agency isn't building new spare parts for the Hubble Space Telescope.

"Nothing is being built for further servicing," Weiler says, "because to spend money on that would mean we wouldn't be able to build the next-generation telescopes."

And during this last visit to Hubble, astronauts will install a little mechanism that will allow a robotic spacecraft to capture Hubble at the end of its life and send it de-orbiting down toward the Pacific Ocean.