Accessibility links
7 Obscure Facts About The Statue Of Liberty Starting July 4, the public will once again be able to get inside the Statue of Liberty's head, which is topped with 25 windows and seven spikes. Here are seven things you might not know about Lady Liberty. 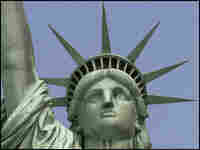 Presented to America by the people of France in 1886, the Statue of Liberty sits on a 12-acre island in New York Harbor. Her crown has 25 windows and seven spikes. Timothy A. Clary/AFP/Getty Images hide caption 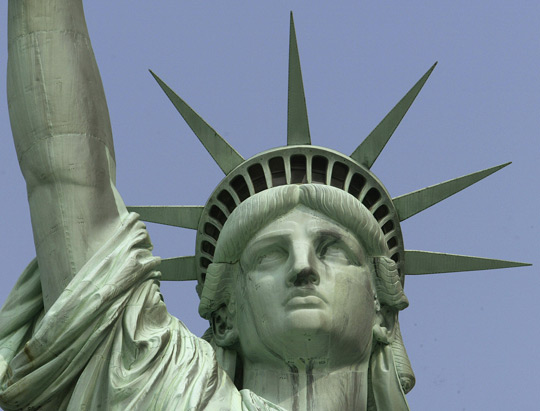 Presented to America by the people of France in 1886, the Statue of Liberty sits on a 12-acre island in New York Harbor. Her crown has 25 windows and seven spikes. 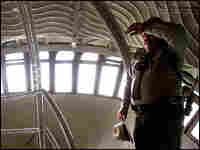 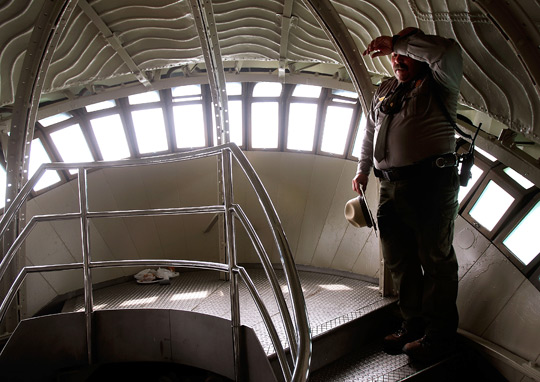 National Park Service park ranger Eugene Kuziw wipes sweat from his brow inside the crown of the Statue of Liberty on Thursday in New York City.

Beginning July 4, the public will once again be able to clamber up into the crown of the Statue of Liberty. Interior Secretary Ken Salazar made the announcement on the Today show Friday while standing in the crown with host Matt Lauer.

The statue was closed for security reasons after the Sept. 11, 2001, terrorist attacks. The base and other areas have since reopened. Salazar said about 30 people an hour will be able to visit the crown at first. New security measures and improvements eventually will enable about 200,000 people a year to get inside Lady Liberty's head.

"There is nothing that symbolizes what America is" more than the statue, Salazar said. Standing at the top "is awe-inspiring," he said. "It sends goosebumps down my shoulder blades, down to my spine."

The statue had no comment on how it made her feel.

Presented to America by the people of France in 1886, the statue sits on 12-acre Liberty Island in New York Harbor. It is just over 305 feet tall from the ground to the top of the torch flame. The crown has 25 windows and seven spikes.

Speaking of seven, here are ...

Spike That Fact! The seven spikes represent the seven seas and seven continents of the world, according to the Web sites of the National Park Service and the Statue of Liberty Club. "That's not true," says Barry Moreno, author of The Statue of Liberty Encyclopedia and the park's official librarian. The spikes are sun rays, he says, and the circle is "simply a halo or what in art is called a nimbus, showing she is divine." He adds that the Web site needs to be changed.

Weight, Weight, Don't Tell Me! The statue is fashioned from copper atop an undergirding of steel. The copper in the statue weighs 31 tons, the steel weighs 125 tons and the concrete foundation is 27,000 tons.

Do Not Torch The statue's torch has been closed to the public since the "Black Tom" explosions in 1916. German agents sabotaged a munitions depot on a nearby island on July 30, 1916, and shrapnel damaged the statue's torch and skirt. Today, members of the National Park Service must scale a 40-foot ladder to tend to the floodlights in the torch.

Winds of Change When the wind blows 50 miles an hour, the statue sways three inches and the torch shifts five inches.

Give Me Liberty and Give Me Death Though the statue symbolizes hope and optimism to millions, it has been the setting for at least three suicides over the years, says Moreno. He believes the first may have been in 1929, when a young fellow, turned down by his girlfriend, threw himself from the crown. In 1997, the New York Daily News reported that a 30-year-old man from Senegal plunged 100 feet to his death. "All indications are that it was a suicide," said Manny Strumpf, the National Park Service spokesman at the time. There have been no murders that Moreno is aware of, but there was a 2006 novel titled Murder at the Statue of Liberty — by Manny Strumpf.

Liberty Goes Hollywood The Statue of Liberty has starred in films since cinema's early days. Charlie Chaplin featured it in his 1917 film The Immigrant. And Alfred Hitchcock used the statue as a backdrop for his 1942 feature film The Saboteur.

The Statue's Trident Vandalism is a perennial problem, park service officials say. When the crown was open, people put chewing gum all over the place and wrote their names with lipstick.