Accessibility links
Neutral Milk Hotel Album Transformed For Stage With songs about Anne Frank's final months at Bergen-Belsen, Neutral Milk Hotel's In the Aeroplane Over the Sea hardly seems like the stuff of high school theater. But with the aid of The Dresden Dolls' Amanda Palmer, students in Lexington, Mass., have turned the seminal indie rock album into a surrealist production. 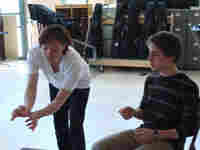 Amanda Palmer pretends to place a flower into a vase as Alex Parrish pretends to look at a restaurant menu. Avishay Artsy hide caption 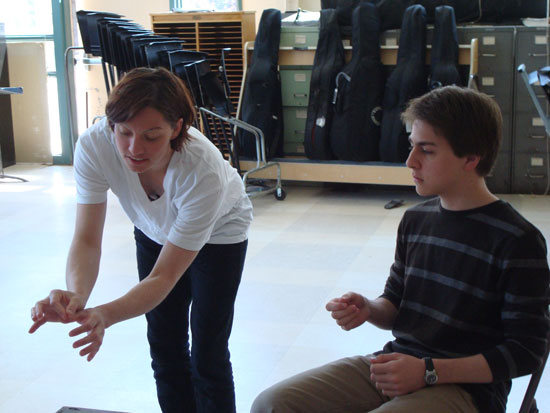 Amanda Palmer pretends to place a flower into a vase as Alex Parrish pretends to look at a restaurant menu. 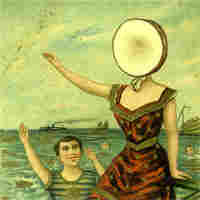 Neutral Milk Hotel's second and last album, In the Aeroplane Over the Sea, inspired Amanda Palmer to base a play around its themes and music. hide caption 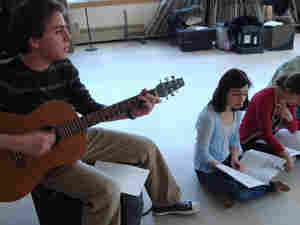 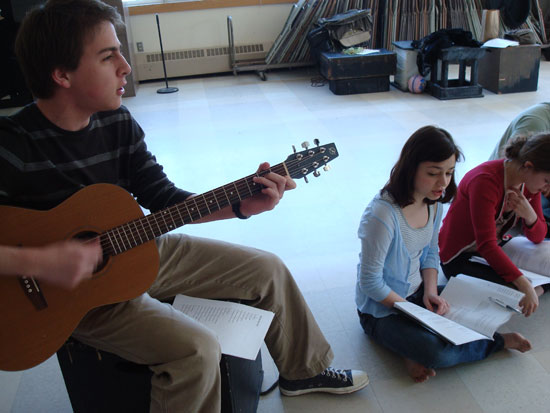 The scene is a restaurant. Anne Frank sits at a table.

The actress says, "We have duck a l'orange, saffron couscous and steak. Or would you like to try some of our fine wines? Helga, darling? Please? Answer me?"

This is all in Frank's imagination. In fact, she's in a death camp, dying of typhus and losing her grasp on reality. Emma Feinberg plays Anne Frank. She's a freshman at Lexington High School in Massachusetts and the play is called With the Needle That Sings in Her Heart. It's about Frank's final months at Bergen-Belsen. Faced with horror and brutality, she escapes into a world where prisoners and Nazi officers become circus performers.

If this sounds a little out there for a high school play, consider the source material: In the Aeroplane Over the Sea by Neutral Milk Hotel, an album released in 1998. The group was part of a collective of musicians living in Athens, Ga., called Elephant 6. Strange, dreamlike lyrics reference a two-headed boy, the king of carrot flowers, and Anne Frank, though never by name.

"I know they buried her body with others / Her sister and mother and five hundred families / And will she remember me, fifty years later / I wish I could save her in some sort of time machine." — Neutral Milk Hotel's "Oh, Comely"

A Dresden Doll Pitches A Play

The use of horns, organs, banjo and singing saw; the achingly childlike lyrics; the intensity and purity and urgency of the vocals startled listeners a decade ago, and soon earned the album an obsessive following, including Amanda Palmer. She calls it the Sgt. Pepper's of her generation.

"I watch people proselytize this record all over the world, and it's like this secret brotherhood of awesome music that's never had any kind of big mainstream publicity," Palmer says. "It's just this sacred record that people connect through."

Palmer is a Lexington High alum and acted in several plays under the guidance of theater director Steven Bogart. He's been leading drama workshops at the school for nearly two decades. Palmer went on to form The Dresden Dolls, a band she describes as "Brechtian punk cabaret." The duo has released a handful of records and toured the globe, but Palmer always stayed in close contact with her old mentor.

"After the band became successful and I started going out into the world and delving into different theatrical projects, I missed this environment. I missed the purity of the process," Palmer says.

She proposed to Bogart that they work with his students to write a play inspired by In the Aeroplane Over the Sea, but most of his students had never heard of it.

"I was sort of taken aback by how open it was and sort of thrown off, but I kept listening to it and I found I just couldn't stop. It's so beautiful because every time you listen to this music you hear something different," says sophomore Lindsay Kosos. "And I listen to it all the time — I fall asleep listening to it."

The students spent several weeks with the music, creating sculptures and drawings inspired by the lyrics, and then began improvising scenes.

Calling Up The Spirit Of Jeff Mangum

In the Aeroplane Over the Sea was Neutral Milk Hotel's last recording. Sales have remained consistent in the years since and its members went on to form other bands. But the band's singer and songwriter, Jeff Mangum, stopped releasing music.

"Jeff Mangum was somebody who was on a personal quest, and he still is," says Robert Schneider.

Schneider is the frontman for The Apples in Stereo. He also produced In the Aeroplane Over the Sea and played on some of the tracks. Schneider says he's thrilled that high school kids have turned the album into a play.

"It reminds me of me and Jeff and our friends when we were that age, and we were doing these bizarre creative sorts of things," Schneider says. "That's exactly what they're doing. And what we were doing was paying homage to the people that we loved, and that moved us, completely without reference to the music that most of our peers loved."

The students at Lexington High School say they haven't just written a play based on this album, or a play about Anne Frank. It's about art and music coming out of terrible things. And it's about being transformed by that process of creation. A junior, whose parents did not want her identified, found herself transformed.

"There was one rehearsal where we were using the music a lot, and I just remembered this thing that I had forgotten, which is that there were two Nazis in my family," one Lexington student says. "And I just had this realization that I had to make reparations, I had this just huge debt all of a sudden, which I had forgotten I had. And after that day everything's been heavier and also lighter at the same time and I feel like the music just like draws things out of weird places that you didn't know were there."

Students say their play doesn't necessarily have a message. They do want the audience to come away feeling something, even if viewers can't quite explain what it is — especially if they can't explain what it is.

Neutral Milk Hotel Is On A Mission

Album
In the Aeroplane Over the Sea
Artist
Neutral Milk Hotel