Accessibility links
Steve Forbert, Seasoned Optimist, In Studio 4A The singer-songwriter with the weathered but vulnerable delivery has been touring and recording since his 1980 hit, "Romeo's Tune." With a new album out called The Place and the Time, he visited NPR headquarters for a solo performance and interview.

Hang On Again Till The Sun Sets 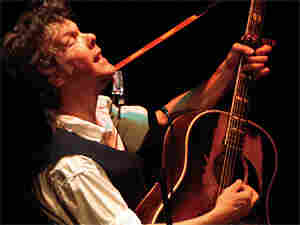 Steve Forbert's The Place And Time is his 13th studio release since 1978. Courtesy of the artist hide caption

Plenty of singer-songwriters have been dubbed the "New Bob Dylan" over the years. Steve Forbert was one of them.

"Oh, it's nothing," he says. "You can't pay any attention to that. It was just a cliche back then, and it's nothing I take seriously. I'm off the hook — I don't have to be smarter than everybody else and know all the answers like Bob Dylan."

Chances are that Forbert has played in a venue somewhere near you during the past 30 years. "Romeo's Tune" was his major hit in 1980, and he's been making music steadily ever since, writing songs and singing them, on CDs and on the road, in a distinctive voice that's weathered but vulnerable — or if you prefer, shy but seasoned.

"Shy but seasoned?" he asked host Scott Simon. "Did you come up with that one yourself? I was saying, 'That's a new one.' "

Forbert has a new album out called The Place and the Time. With a guitar and a bevy of harmonicas, he visited NPR's Studio 4A to play new songs, answer listeners' questions and speak with Scott Simon.

Click the link at the top of the page to hear the full interview and performance, starting around noon ET on May 9.

Steve Forbert And The Sound Benders In Concert June 1, 2007