Accessibility links
Drought, Politics Trouble Farmers In California California is in its third year of drought, and many farmers in the state's crop-rich Central Valley are looking at dusty fields, or worse, are cutting down their orchards before the trees die. Hardest hit is Westlands, where much of the nation's fruit, nuts and produce come from. 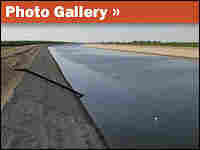 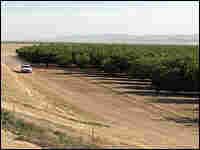 Many fields along the Interstate 5 corridor on the west side of California's Central Valley are left dry, as farmers divert water to others, like this orchard. There is little federal water to sustain all the land. John McChesney for NPR hide caption 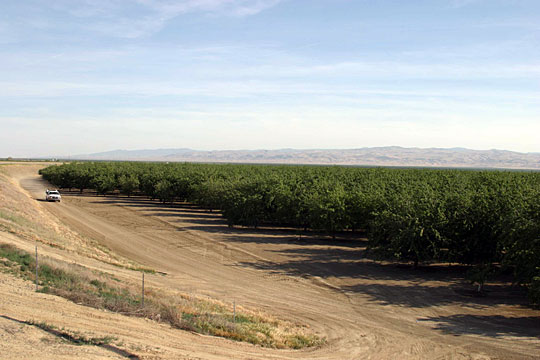 Many fields along the Interstate 5 corridor on the west side of California's Central Valley are left dry, as farmers divert water to others, like this orchard. There is little federal water to sustain all the land. 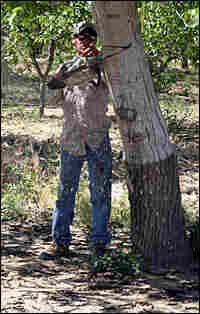 Ty Lompa saws down one of his English walnut trees in California's Central Valley. With no water to keep it alive, bugs and disease will set in. John McChesney for NPR hide caption 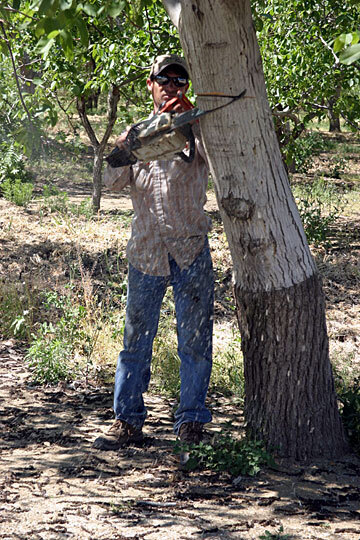 Ty Lompa saws down one of his English walnut trees in California's Central Valley. With no water to keep it alive, bugs and disease will set in.

California is in its third year of drought, and many farmers in the state's crop-rich Central Valley are looking at dusty fields, or worse, are cutting down their orchards before the trees die.

Hardest hit is Westlands, the biggest irrigated region in the country, where much of the nation's fruit, nuts and produce come from. This year, farmers have been told they are getting only a small fraction of the water they need.

And so a few weeks ago, Ty and Janet Lompa were doing the unthinkable: cutting down 110 acres of walnut orchards. That's roughly 10,000 trees and a third of their entire acreage.

Ty Lompa helped plant many of these trees with his father, and they used to water the orchard with flood irrigation from the project built by the federal government. But when water started to become an issue, "we immediately switched over to micro-irrigation," says Lompa. "So we have absolutely no runoff."

But the Lompas' farm relied entirely on federal water — they have no groundwater of their own. They can keep part of their orchard alive with water they carried over from last year, but the rest can't be saved.

"You can't leave trees in the field and just let 'em die," Ty Lompa says. "You're gonna get bugs, you're gonna get disease, so they have to come down."

The Lompas are furious because they blame government, not nature, for the death of their trees. And Janet Lompa tells her four children that "the politicians gave it all to the fish" when they ask why there's no water.

Farmers throughout this region echo the sentiment that politics, not the drought, is the problem. Most of California gets its water from a huge estuary called the Delta, where two big rivers join in the center of the valley. But so much water was being pumped out of the Delta that a tiny smelt there, an endangered species, is disappearing. So late last year, a federal judge ruled that the amount of water being delivered to the south had to be sharply cut back.

In April, in a sweltering tin shed in the middle of the Westland's water district, about 200 farmers gathered to hear what Tom Birmingham had to say about the crisis. Birmingham is the executive director of the irrigation district. Yes, the drought is a problem, he says, but he believes the much bigger problem is that court ruling.

"Since mid-February, as a result of that biological opinion, we've lost approximately 300,000 acre-feet of water. It's floated out the Golden Gate."

That means it was given to the fish. Several pickups parked outside the meeting sport a hand-painted slogan: "Start the pumps."

In the 1950s, Westlands was the last district to join the vast irrigation project built by the federal government, and so it's the first to get cut when water runs low. That's how Western water law works, and there are environmentalists who say that this land should never have been irrigated in the first place, and that some of the soil here gets salty because of bad drainage.

In his office lined with maps and charts, Birmingham offers a rebuttal.

"I don't know whether Westlands should have ever been farmed, but the reality is that it was. I have heard people say that the city of Los Angeles should never have been developed on the imported water supply from the western Sierra."

But Los Angeles is here to stay, and so is Westlands, according to Birmingham. And with a long summer of uninterrupted sunlight, farmers now cultivate a rich farming district 15 miles wide and 70 miles long that contributes several billion dollars to the state economy. Where the soil is good, it's almost like agriculture on steroids.

"There are spots here where you can dig down 25, 30 feet, and the ground looks almost the same as it does in the first 8 to 10 inches," says farmer Gary Coehlo. "And that's top soil farmers worldwide would be envious of."

The Coehlo family farms 6,500 acres in Westlands. Coehlo's grandfather came to the Central Valley in the early 1900s from the Azore Islands, and he started a dairy, then got into row crops. The Coehlos have grown everything from tomatoes to almonds, to garlic, wheat, alfalfa, sugar beets and cotton. But this year, they're down to less than half of what they usually grow.

Coehlo and his brother Tony stand in the middle of one section of their fallowed fields. Last year, these 400 acres were full of tomatoes.

The Coehlos, who also use groundwater to feed their thirsty crops, say three years of drought is partly to blame for their predicament, but they also say California's water system needs to be redesigned.

"The state of California has gone from 15 million people when these projects were built 50 years ago, to almost 30 million," Gary Coehlo says. "And we haven't added one bit of water, storage, conveyance, dams — anything. Now, the need for water has become greater, and they're gonna dry us up," adds Tony Coehlo.

Drying The Economy, Too

Its not just the farmers who are affected by the dry-up — the Coehlos' used to employ 60 full-time workers; now that's down to 25. In nearby Mendota, a dusty, half-deserted replica of a Mexican town, the unemployment rate is over 40 percent. Clusters of men gather on the town's main drag; they have no work. Ricardo Armaya says that normally he'd be employed harvesting broccoli. This year has been the worst, he says — there's no broccoli.

Joseph Riofrio, is a four-term City Council member in Mendota and owns a small family-run grocery store. These days, he's not able to sell many groceries. He says his store has become more of a bill payment center. "That's what I've been reduced to, basically," he says. "I see people come in that have no electricity, no phone service, no hot water — they're desperate."

Many people in the region think there is a solution to the problem, which has nothing to do with drought or global warming. They think there's plenty of water, but that the system needs to be replumbed with a canal that would lead water around the environmentally sensitive Delta and deliver it to the southern half of the state.

Peter Gleick, an environmental scientist at the Pacific Institute, isn't convinced. The water supply is shrinking, he says, and agriculture just can't continue to take 80 percent of the water dedicated to human use in California.

"We've got a situation where the federal government and state government have built infrastructure and made promises that can't be kept, because there isn't enough water. That's the reality," Gleick says.

But Tony Coehlo, standing in his fallowed field, feels the government should live up to its original promises.

"When the project first started, they brought water through this area and they said, 'We can subsidize the cost of this project by selling some water to farmers.' And they did that. It's kind of like putting you on a narcotic and taking it away from you. It's leaving you dry," he says.

But if the drought continues, if the snowpack dwindles for years because of climate change, and if nature needs more water to keep fish alive, then Westlands may be in rehab for a long time.