Accessibility links
Idan Raichel Project: An Israeli Pop Producer With A Global Cast Idan Raichel has made his name by mixing cinematic Israeli pop with the sounds of his country's immigrant community. His latest album reaches even farther afield, with singers from Colombia, Rwanda and the Cape Verde Islands.

Songs From 'Within My Walls'

Todas Las Palabras [All the Words]

Israeli music producer Idan Raichel collaborates with many musicians from around the world. So far, he has worked with more than 90 artists. 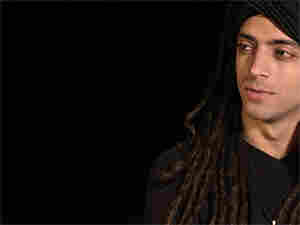 Within My Walls is the third album from The Idan Raichel Project. Bartzi Goldblat hide caption

"I see myself as the director of many, many scenes," he says. "We are 90 musicians: The youngest is 16 years old, and the eldest are 64, 79, 83 and 89 years old. For those listeners who are not familiar with the Israeli society, we are all kinds of immigrants. So we have singers from the Ethiopian community in Israel, and musicians from the Moroccan community. And we are proud to have all these singers joining us by MySpace, or by just writing to our Web site."

It's all part of his ongoing recording work with what he calls The Idan Raichel Project. Raichel (pronounced RYE-kell — "with phlegm," he says) writes, arranges and performs on many of the songs, but he works with a far-reaching cast of musicians to record his compositions.

Raichel says he started to play the accordion at age 9 because he loved gypsy music. By the time he was 18, he was serving a mandatory military stint in the Israeli army — where he joined the army rock band. Now, at 31, he's a platinum-selling artist in Israel.

Here, he speaks with host Liane Hansen about The Idan Raichel Project's latest album, Within My Walls. Featured on it are singers from Colombia, Rwanda and the Cape Verde Islands — as well as from within Israel.

"You can compare it to a huge stage — opera stage," he says. "In every second, there are so many actors — sometimes the set is so big and colorful — and so many singers. And the director's job is just to focus each time; to get the focus on someone else. But it's all happening all the time."

Click on the link at the top of the page to hear the full interview with Idan Raichel, starting around noon ET on May 10.