Accessibility links
Who Really Cut Off Van Gogh's Ear? Most anyone who's had a beginning art history class knows the story of how the great painter Vincent van Gogh sliced off part of his left ear during a fit of madness. Now a new book argues that the whole tale isn't true. The story of van Gogh's madness was part of a coverup, the authors say, by none other than van Gogh's friend and fellow artist Paul Gauguin. 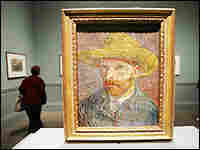 Vincent van Gogh's Self-Portrait with a Straw Hat on display in 2005 at the Metropolitan Museum of Art in New York City. Mario Tama/Getty Images hide caption 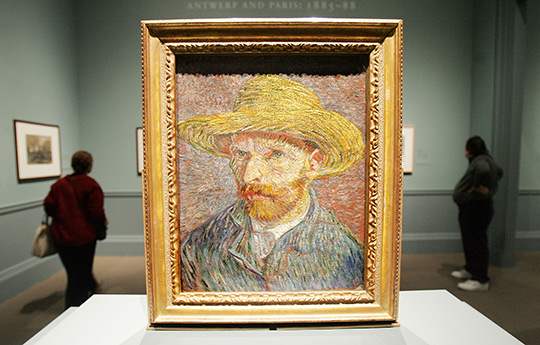 Vincent van Gogh's Self-Portrait with a Straw Hat on display in 2005 at the Metropolitan Museum of Art in New York City.

Most anyone who's had a beginning art history class knows the story of how the great Dutch painter Vincent van Gogh sliced off part of his left ear during a fit of madness. Now a team of German historians has published a new book arguing that the whole tale is untrue. The story of van Gogh's madness was part of a coverup, the authors say, by none other than van Gogh's friend and fellow artist Paul Gauguin.

Van Gogh and Gauguin forged a deep friendship during the two years they lived and painted as neighbors in Arles, in the south of France. The two had built the town's reputation as an artistic colony. That dream ended in an angry exchange between the painters on the evening of Dec. 23, 1888.

"The traditional version of what happened there is wrong," Hans Kaufmann says.

As that story goes, van Gogh cut off part of his own ear with a straight razor after he and Gauguin parted. But Kaufmann and his colleague, Rita Wildegans, dug through original police records, biographical material and van Gogh's letters. They concluded that Gauguin, an accomplished fencer, attacked van Gogh with a rapier after van Gogh threw a wine glass at him.

"The traditional version goes back on two reports," says Kaufmann. "Self-defending or self-protecting propaganda of Paul Gauguin, who himself stressed that Vincent van Gogh was mad, which is not true. [Van Gogh] suffered from these fits, which came [all] of a sudden and which ended suddenly."

To make that case, Kaufmann cites an earlier retroactive diagnosis by an American molecular biologist, which argued that van Gogh suffered only periodic bouts of volatility and depression as a result of a likely congenital metabolic disorder now known as Acute Intermittent Porphyria, or AIP syndrome.

None of this convinces Louis Van Tilborgh, curator of the Van Gogh Museum in Amsterdam.

"Well, it's an interesting opinion, but so far I have not found proof for it," Van Tilborgh says. "There's no smoking gun." Or, in this case, no bloody rapier.

Van Tilborgh characterizes the new book as speculation unsupported by letters from the painter's brother Theo van Gogh, or any other evidence.

"What really happened between the two, we do not exactly know," says Van Tilborgh. "There are only the words of Gauguin. And, I mean, the police did not arrest him. There's no sign from a letter of Vincent that confirms that."

If Gauguin was the perpetrator, why didn't van Gogh report it? Why didn't he denounce his colleague? Kaufmann says van Gogh was very fond of his friend, "and he didn't want to lose him. So he promised," Kaufmann says, "He promised not to tell."

Kaufmann acknowledges that there is no definitive proof of what happened that December night, but he maintains that the official story is also full of holes and speculation, and that his version better matches what is known of the two masters.

"If the truth had been known immediately after the incident, the lives of both would have been quite different, of course," Kaufmann says. "For Gauguin, it would have been prison or something like that. And for Vincent, that was the beginning of the end of his hopes for a colony of painters in southern France. He was regarded as insane after that."

Van Gogh was taken from his home by the police and temporarily left in jail. A year and a half later, he shot himself and died.