Accessibility links
Iran Releases Jailed U.S. Journalist Saberi American freelance journalist Roxana Saberi was released from an Iranian prison Monday and reunited with her parents after her sentence for espionage was reduced on appeal, ending a four-month ordeal for the reporter that strained relations between Tehran and Washington. 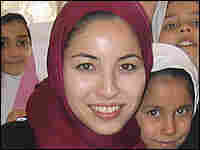 In this photo taken before her arrest, Roxana Saberi poses with schoolchildren in Iran. Courtesy of Reza Saberi hide caption 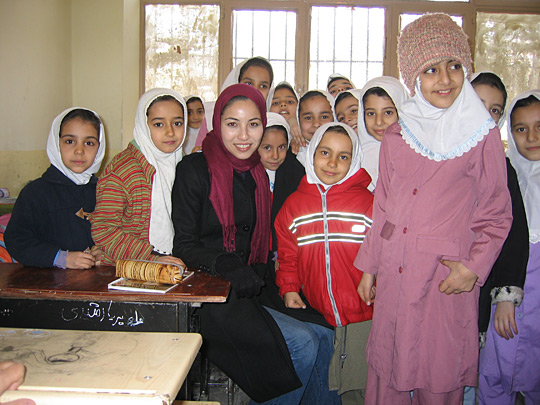 In this photo taken before her arrest, Roxana Saberi poses with schoolchildren in Iran.

Saberi's Lawyer: Journalist's Release Is Not Political May 11, 2009

April 8 — Saberi, who is being held at Tehran's Evin prison, is charged with espionage.

April 13 — The American journalist appears for a one-day trial held behind closed doors.

April 18 — Saberi is sentenced to eight years in prison by Iran's Revolutionary Court.

May 11 — Saberi is released from Evin prison after an appeals court cuts her jail term to a two-year suspended sentence.

American freelance journalist Roxana Saberi was released from an Iranian prison Monday and reunited with her parents after her sentence for espionage was reduced on appeal, ending a four-month ordeal for the reporter that strained relations between Tehran and Washington.

Iranian authorities released Saberi to the custody of her father nearly a month after she was convicted of spying for the United States.

"I'm very happy that she is free. Roxana is in good condition," Saberi's father, Reza Saberi, said after her release.

Saberi's eight-year sentence, issued by an Iranian court after a secretive one-day trial on April 13, was reduced to a suspended two-year term, according to her attorney, Abdolsamad Khorramshahi. As a condition of her release from Tehran's Evin prison, she will be banned from reporting from Iran for five years.

U.S. Secretary of State Hillary Clinton, who had taken a personal interest in Saberi's case, said she was pleased to hear she was free. "Obviously, we continue to take issue with the charges against her and the verdicts rendered, but we are very heartened that she has been released and wish her and her family all of the very best," Clinton said.

Saberi "is currently with her family and will be leaving Tehran to return to the United States in the coming days," she said.

On Sunday, Saberi's attorney said a judge had agreed to free the journalist after a five-hour closed-door appeals hearing.

Saberi was charged with "cooperating with a hostile state." She had been reporting from Iran for the past six years but had allowed her press credentials to expire, her father said shortly after her Jan. 31 arrest.

The case has made for tense diplomatic relations between Washington and Tehran as President Obama tries to engage America's longtime adversary. The White House had called the charges against Saberi baseless and demanded that she be freed.

Soon after she was convicted, Iranian President Mahmoud Ahmadinejad suggested the sentence could be reversed.

'A Miscarriage Of Justice'

Saberi, a native of Fargo, N.D., had been living in Iran for six years and had worked as a freelance reporter for several news organizations, including NPR, the British Broadcasting Corp. and ABC News.

NPR President and CEO Vivian Schiller said the network was overjoyed at the news of Saberi's release.

"We are immensely grateful that the appeals court has ruled in Roxana's favor and are relieved that she is now free to return home with her family," Schiller said Monday. "Her story highlights the enormous challenges journalists face in many countries, and the unfortunate fact that freedom of the press cannot be taken for granted. In Roxana's case, the story has a happy ending, and we are delighted that she will once again be free to practice her profession."

"I felt it was a miscarriage of justice," he said. "This young woman was not engaged in espionage."

From North Dakota To Iran

Saberi, the daughter of an Iranian father and a Japanese mother, was born in New Jersey and raised in North Dakota, where she was a pianist and a high school soccer star. In 1997, she was named Miss North Dakota. Before she was arrested in Iran, Saberi had been working toward a master's degree in Iranian studies and international relations. She was also writing a book about Iran.

According to her father, Saberi was detained Jan. 31 for buying a bottle of wine. Buying alcohol is banned under Iran's Islamic law.

"She said that she had bought a bottle of wine and the person that sold it had reported it and then they came and arrested her," Reza Saberi told NPR in an interview in March, adding that his daughter thought the incident was a pretext to arrest her.

On Monday, a friend of the Saberi family told NPR that she placed flowers at the family's door — along with a "Welcome Home" sign.