Accessibility links
The New Republic: What I Hope The Supreme Court Battle Will Look Like The coming battle over President Obama's first Supreme Court nomination could be an enlightening debate over what direction the court should take. It could also be a nasty and hypocritical fight that obscures more issues than it clarifies. Which will it be?

The New Republic: What I Hope The Supreme Court Battle Will Look Like

The New Republic: What I Hope The Supreme Court Battle Will Look Like 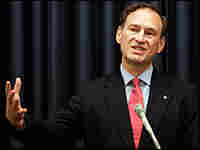 The coming battle over President Obama's first Supreme Court nomination could be an enlightening debate over what direction the court should take. It could also be a nasty and hypocritical fight that obscures more issues than it clarifies. Which will it be?

When George W. Bush was president, Senate Republicans who are now proposing to raise an ideological ruckus said that Democrats were wrong to use judicial philosophy as a benchmark for confirming a nominee. If a president's picks were formally qualified and intelligent — and both Chief Justice John Roberts and Associate Justice Samuel Alito were — that should be enough, the Republicans said.

Sen. Jon Kyl, R-Ariz., warned during the Alito confirmation that if Democrats used ideology as a measuring stick with Bush nominees, it was inevitable that Republicans would apply the same standard to the appointee of a Democratic president. "I say to my Democratic friends, think carefully about what is being done today," Kyl warned in 2006. "Its impact will be felt well beyond this particular nominee."

In fact, there is no evidence that Republicans would have been nicer to an Obama nominee if Roberts and Alito had been confirmed unanimously.

Nonetheless, Kyl had a point. To pretend that these judicial fights are about anything other than the court's philosophical direction is a form of willful dishonesty. It's better to be straightforward about the existence of a political struggle over the court than to manufacture phony reasons for opposing a nominee related to "character," "qualifications" or "temperament."

Liberals, who (in my view, correctly) opposed Roberts and Alito on philosophical grounds, should thus not be hypocritical themselves and deny the conservatives' right to challenge a nominee's philosophy. On the contrary, liberals should welcome a real debate — and win it.

But this also means that such matters as a nominee's sexual preference should not be a consideration, and an authentic debate will involve ideas, not slogans — notably "judicial activism," "legislating from the bench" and "strict constructionism."

At the very least, we should apply such terms consistently to conservative and liberal nominees alike. The truth is that judicial activism is now far more the habit of conservative justices than liberals.

The real danger of a conservative Supreme Court is that it will rob Congress and the states of the right to legislate on behalf of civil rights, worker rights, the environment and social welfare, just as conservative courts did from the turn of the last century until the late 1930s.

The case before the Supreme Court of the Voting Rights Act is instructive. Section 5 of the law requires eight states (six of them Southern) as well as most of Virginia and dozens of jurisdictions elsewhere to obtain Justice Department approval ("preclearance") before making changes to their voting laws. The idea was to prevent covert moves to disenfranchise minority voters in areas where their rights had once been in jeopardy.

Opponents of the provision say that while it may have been necessary when the Voting Rights Act first passed in 1965, a time when many Southern states openly discriminated against African-Americans, it is no longer needed.

But would it not be a form of judicial activism for the court to strike down an act of Congress that is 44 years old? Is it not a form of legislating from the bench for the court and not Congress to decide whether a law is outdated?

And it's worth noting that the term strict constructionism got a new lease on life from segregationists who opposed judicial intervention on behalf of the rights of African-Americans. Surely it would be disconcerting if the current conservative court mimicked the conservative courts of the 1890s by using that idea, or its close cousin "originalism," to strike down a civil rights law.

As for the coming nomination battle, it's true that in replacing Justice David Souter with a liberal, Obama would not be tipping the balance on the court. It would retain a 5-4 conservative tilt, with Justice Anthony Kennedy as an occasional swing vote. Many will thus ask why there should be any fighting at all over Obama's first nominee.

But at this moment, it's inescapable that any nomination will set off an argument over the court's philosophical direction because that happens to be one of the most important struggles in American public life. This issue, not the biographical details of the next judicial nominee, should be the heart and soul of the coming debate.

E.J. Dionne, Jr. is the author of the recently published Souled Out: Reclaiming Faith and Politics After the Religious Right. He is a Washington Post columnist, a senior fellow at the Brookings Institution, and a professor at Georgetown University.