Accessibility links
Saberi's Lawyer: Journalist's Release Is Not Political After four months in Iranian custody, American journalist Roxana Saberi was released from prison and reunited with her parents Monday. Saberi's attorney, Abdolsamad Khorramshahi, tells NPR the court's decision was not political, but legal. And he says he will remember that moment for the "rest of his life." 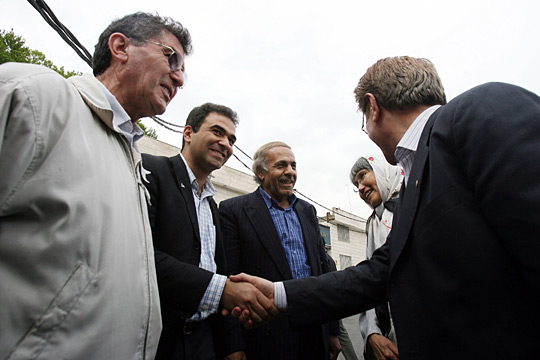 Abdolsamad Khorramshahi: I was standing in the courtroom with Roxana when the verdict came down saying that she would be released. I will remember that moment for the rest of my life. I looked at Roxana and saw tears coming down her face. I am simply overjoyed and thrilled. I can see the results of my labor. From the beginning, I insisted if we remain calm and stay away from heated rhetoric that we would be victorious in the end. When Roxana was on a hunger strike, I advised her to stop because I said, "You are already famous and your case is well-known; there is no reason to do this."

Does she have permission to leave the country?

Yes, Roxana has permission to leave the country. However, for the next five years she does not have permission to report in Iran or be a reporter in Iran. But if she decides, she can stay in Iran but she can't report on Iran for five years. Also, in two years if she doesn't commit any crime — her record will be cleared.

Why did the appeals court decide to release her? What happened in court today?

Today's ruling was just, and now politicians and journalists and pundits are doing all kinds of analysis saying it was a political decision or it was for this or that reason. I am here to tell you this was a legal decision and that is all. This was not about politics.

People are asking, "Why did the first court sentence her to eight years and the appeals court decide on a two-year sentence that has been commuted?" I can explain all this to you. I am the one who has seen the evidence, and in the coming days when there is more time, I am happy to go through it with you. People should stop making these claims or conclusions. I have been on this case from the beginning, and I know all the details.

The first verdict was eight years because they claimed that because the United States is at war with Iran, then she is a spy under the law (Article 508 of the law of Islamic punishment, Mojazat-e-Islami). Today, we spent time and insisted that even though the U.S. has not had relations with Iran for the past 30 years — we are not technically at war and therefore they cannot use Article 508. Today's verdict was as a result of a judicial review, not politics as some are claiming. The first court had one judge; in the appeals court, there were two judges and we were able to convince them.

What are the Saberi family's plans?

I do not know their immediate plans.