Accessibility links
Dave Alvin: The Sad Song Of 'Everett Ruess' Writer, artist and explorer Everett Ruess went missing 75 years ago, but his body was found only recently. Dave Alvin wrote a song called "Everett Ruess" for his 2004 album Ashgrove, and it's a beautiful, delicate, ambling tune, sung from the perspective of Ruess himself. 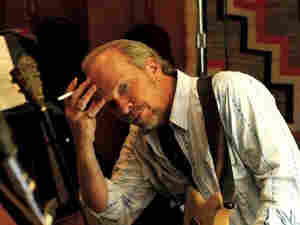 [Editor's Note: On the most recent episode of Weekend Edition Saturday, Jenny Brundin tells the story of writer and artist Everett Ruess, who went missing 75 years ago. Here's a look at Dave Alvin's 2004 song about Ruess' mysterious disappearance.]

Everett Ruess was a writer, artist and explorer who fearlessly roamed the Southwest on his own in the 1930s when he wasn't hanging out with the likes of Dorothea Lange, Ansel Adams and Edward Weston. "When I go, I leave no trace," Ruess once wrote. That line became especially haunting in 1934, when the young adventurer headed into a desert in Utah, never to be seen again. He was just 20 at the time.

Fellow Californian and musician Dave Alvin (of The Blasters, X and The Knitters) was captivated by Ruess' disappearance. "He never had to grow up. He never had to face some of the mundane things we all have to face as we age," Alvin says in a recent interview. (Click the audio link at left to hear it.) "He could remain pure and poetic."

Alvin wrote a song called "Everett Ruess" for his 2004 album Ashgrove, and it's a beautiful tune, sung from the perspective of Ruess himself. A delicate, ambling song, it's the sort of thing you'd want to hear while driving through the dry, mountainous terrain Ruess wandered decades ago.

Alvin's lyrics poetically chronicle Ruess' life: "Well, I hate your crowded cities, with the sad and hopeless mobs / And I hate your grand cathedrals, where you try to trap God / 'Cause I know God is here in the canyons, with the rattlesnakes and pinon pines / And they never found my body, boys, or understood my mind."

Alvin, whose new album Dave Alvin and the Guilty Women comes out May 26, has been getting a lot of calls about that song lately, because Ruess' body has finally been found. Through careful forensic examination, scientists in Boulder, Colo., were able to confirm recently that remains found in a rocky crevice in Utah are those of Everett Ruess.

It turns out that Ruess was mugged and bludgeoned to death by a group of young Ute Indians. When Alvin heard the news, he says he immediately knew that he'd never perform his musical tribute to Ruess again in concert.

"The song is about the poetry of his life," Alvin says. "To suddenly change the first-person story into a police report of, 'Well, they sent my bones to Boulder for DNA,' it's just not as poetic for me."

Even with the news update, some of the song's most important lines remain unchanged: In the last verse, Alvin sings, "But my end, it doesn't really matter / All that counts is how you live your life."