Accessibility links
National Review Online: A Layman for the Supreme Court? President Obama is being urged by some in Washington's political class to look beyond the usual sources when he fills Justice David Souter's seat on the Supreme Court. But sometimes the law has to be complex to address problems that have no easy or intuitive legal ordering.

National Review Online: A Layman for the Supreme Court?

National Review Online: A Layman for the Supreme Court? 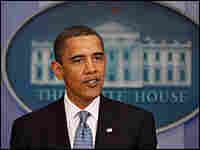 As if his populist streak needed further encouragement, President Obama is being urged by some in Washington's political class to look beyond the usual sources when he fills Justice David Souter's seat on the Supreme Court. "I would like to see more people from outside the judicial monastery," said Senate Judiciary Committee chairman Patrick Leahy, "somebody who has had some real-life experience, not just as a judge." The AP reports that Sen. Arlen Specter, fresh off the road to Damascus, said "he could imagine a nominee who was not a lawyer." Others have echoed this talking point.

The sentiment is understandable: In many areas, our law today is so absurdly convoluted that only an outsider would have the common sense to say so — and do something about it. Do we need any better example than campaign finance? Little more than a month ago, the plaintiffs' attorney in a case before the High Court opened with this: "Participation in the political process is the First Amendment's most fundamental guarantee. Yet that freedom is being smothered by one of the most complicated, expensive, and incomprehensible regulatory regimes ever invented by the administrative state." And where did that regime come from? Why, the very politicians who now call for a layman to interpret and apply it. A cry for help?

But the problem of arcane law undermining our principles, however important, is only one side. Sometimes the law has to be complex to address problems that have no easy or intuitive legal ordering — intellectual property, bankruptcy, securities law, jurisdictional questions, and the like. A 1608 colloquy comes to mind; it took place between Sir Edward Coke, chief justice of England's court of common pleas, and King James I, who sought to decide cases himself, saying that the law was founded on reason, and he too had reason. Lord Coke answered: "True it was, that God had endowed his Majesty with excellent science, and great endowments of nature; but his Majesty was not learned in the laws of his realm of England, and causes which concern the life, or inheritance, or goods, or fortunes of his subjects, are not to be decided by natural reason, but by the artificial reason and judgment of the law, which law is an act which requires long study and experience, before that a man can attain to the cognizance of it."

Such "artificial reason" has often been ridiculed, and rightly so. But it has also proved necessary. Our legal system would be much simpler if we abandoned federalism, for example, to say nothing of separated powers or judicial review. But we don't, because we've learned from long experience that complexity, too, has its virtues. And drawing those distinctions takes more than a passing acquaintance with the law.

Yet the siren song of the lay justice resonates with Obama's populism. At his initial press briefing on the subject, he said that "justice isn't about some abstract legal theory or footnote in a casebook; it is also about how our laws affect the daily realities of people's lives." More recently he explained: "I view that quality of empathy, of understanding and identifying with people's hopes and struggles, as an essential ingredient for arriving at just decisions and outcomes." Yet he also said, "I will seek somebody who is dedicated to the rule of law, who honors our constitutional traditions, who respects the integrity of the judicial process and the appropriate limits of the judicial role." Empathy, therefore, which sometimes sits uncomfortably with the rule of law, might arise only in "those 5 percent of cases that are truly difficult," those where the law is truly unclear.

Are we left here too, then, with a president who wants it both ways? If so, Republicans on the Senate Judiciary Committee will need to press the eventual nominee with sharp specifics. We'll want to know in what kinds of cases "empathy" might rightly come into play, instead of serving as a cover for policy trumping law. The president speaks of justice, but does the nominee appreciate that applying the law, which is the Court's job, is not the same as doing justice? More specifically, what are the constitutional limits on Congress's power to regulate and redistribute? How does a judge determine the scope of presidential war powers? What is the place of international law under the Constitution? How should the Court adjudicate cases invoking unenumerated constitutional rights? At bottom, if our Constitution is designed to secure limited government, how will the nominee ensure that?

No one believes that Senate Republicans will be able to block any but the most radical of nominees, nor should they try, probably. But at present the party is searching for its identity, and this is an opportunity that Republicans should seize — to establish themselves as the party of liberty and limited, constitutional government. If they do, it will serve them well in 2010 and beyond.

Roger Pilon is vice president for legal affairs at the Cato Institute and director of Cato's Center for Constitutional Studies.