Grilled Cheese Gets An Update

Grilled Cheese Gets An Update

Susan Russo is a food writer in San Diego. She publishes stories, recipes and photos on her cooking blog, Food Blogga. She is working on a cookbook, Field Guide to Sandwiches (Quirk Books), which will be released in the fall of 2010. When she isn't writing about her Italian family back in Rhode Island or life with her husband in Southern California, she can be found milling around a local farmers market buying a lot more food than two people could possibly eat.

For decades, the grilled cheese remained relatively unchanged. One bite of warm, gooey cheese nestled between two crunchy, buttery slices of white toast was all it took to transport you back to the better days of childhood.

Then creative chefs, such as Nancy Silverton of La Brea Bakery in Los Angeles, took a new look at the classic model. About 10 years ago, Silverton started Thursday Grilled Cheese Night at her L.A. restaurant Campanile. The plain Jane grilled cheese got a sexy makeover. Silverton offered high-priced, high-style grilled cheese sandwiches such as gorgonzola with roasted radicchio, walnuts and honey and burrata with prosciutto, marinated cherry tomatoes and saffron-braised cabbage and salsa verde. This helped usher in a whole new world of designer grilled cheese sandwiches.

While some people relish the thought of caramelized grilled onions and creamy Gruyere on artisanal olive bread, others view anything other than sliced American cheese on Wonder Bread an affront to the iconic grilled cheese.

That's when Wonder Bread began selling whole loaves, and a decade later it introduced pre-sliced bread. In 1917, Kraft Foods sold its first processed canned cheese to the U.S. Army. Then, much to Americans' delight, Kraft introduced Velveeta in 1928 and individually wrapped slices in 1965.

With the widespread availability of affordable pre-sliced bread and processed cheese, the grilled cheese became an instant American classic. It began appearing on the menus of lunch counters and diners alongside other popular sandwiches, such as the club and the BLT. It was even included in government-issue cookbooks during World War II. Nowhere was it more prevalent, however, than in American homes, where it was both a lunchtime staple and a quick dinner favorite.

Though there are no set rules to making a great grilled cheese, everyone seems to have her or his opinion on the right way to make one. A Google search on "how to make the perfect grilled cheese sandwich," produces 275,000 hits. Here's what some of them say: Always use a cast iron pan. Use only a nonstick skillet. Use a panini press. Butter the bread only. Butter the pan only. Butter both the bread and the pan. Never use olive oil instead of butter. (I'm glad my Italian-American mother didn't have Google when I was a kid.) Remove the crusts. Squish the sandwich with a heavy-bottomed skillet until the crusts crack and the cheese oozes out. Use only Wonder Bread. Always add a thin layer of mayo. Skip all condiments. Got it?

Next, use a good melting cheese, which should be high in fat. Americans' No. 1 cheese of choice is American, followed by cheddar and Swiss. Gouda, Gruyere, havarti, Jarlsberg and Muenster are other favorites. If cost isn't an issue, hand-crafted farmhouse cheeses are more widely available than ever before.

Now decide if you want to include condiments such as Dijon, honey or pesto, or add-ins such as grilled onions, bacon or sliced fruits.

Finally, choose a cooking method: the stovetop, the broiler, a panini press, a toaster oven or an indoor grill.

But, you ask, how do you make the perfect grilled cheese? That's easy. Make the one your mom made for you when you were a kid, because let's face it: A grilled cheese tastes only as good as the childhood memories associated with it.

Use thinly sliced bread so the heat will penetrate easily and melt the cheese.

A good melting cheese should be high in fat and not too hard or dry.

Shredded cheese melts more quickly than sliced cheese. If you prefer sliced cheese, make sure it's very thinly sliced. Two ounces is a good amount for one sandwich.

Butter the outside of the bread rather than the pan. This ensures that the entire surface of the bread will turn golden and crisp.

Use whichever cooking method you prefer. For stovetop cooking, which is the most common method: Use a nonstick pan for easy flipping; briefly preheat the pan and keep the heat on medium-low so the bread won't burn before the cheese is properly melted.

If you like your grilled cheese pressed, then either place a heavy pan on top of the sandwich while it's cooking or use a panini press. 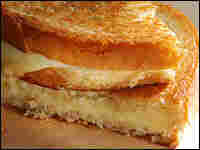 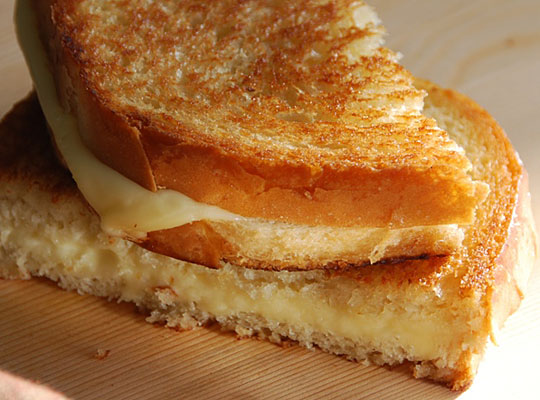 This is a no-frills grilled cheese sandwich – the one that children love and that makes an adult feel like a kid again.

Place sandwich in a preheated nonstick skillet over medium heat. Cook 2 minutes, or until the underside is golden brown and the cheese has begun to melt. Flip the sandwich with a spatula, pressing lightly to flatten. Cook 1 minute, or until it is golden brown and the cheese is completely melted. Slice in half on the diagonal. Eat it while it's hot. 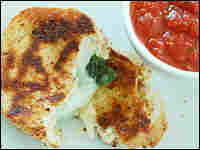 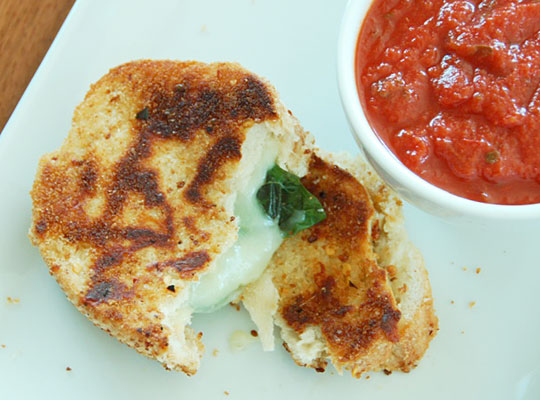 I don't remember the first time my mom made me this breaded and fried Italian grilled cheese sandwich, but I do know that it's my all-time favorite. When you break the sandwich open with your hands, hot melted mozzarella comes oozing out all over the crunchy breadcrumb-coated bread. Though it's wonderful as is, take my advice and dunk it in your favorite marinara sauce.

1/2 cup marinara sauce of your choice

Place 2 bread slices on a clean work surface. Place half the mozzarella cheese on each slice, then top each with two basil leaves. Place a second slice of bread on each, forming two sandwiches.

In a large skillet over medium-low heat, warm the olive oil. Carefully place one sandwich at a time in the egg mixture, making sure to coat the sandwich completely. Allow excess egg to drip back into the bowl. Dredge the sandwich in the bread- crumb mixture until completely coated. Place in the skillet. Cook 2 to 3 minutes or until the underside is golden brown. Flip the sandwich with a spatula, pressing lightly to flatten. Cook 1 to 2 minutes or until it is sizzling and golden brown. Serve hot with a side of your favorite marinara sauce for dunking. 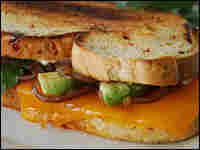 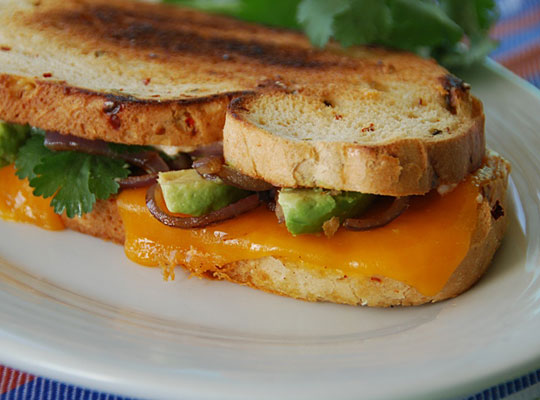 In a small skillet over medium heat, melt 1 tablespoon butter. Add red onions and cook, stirring occasionally, for about 5 minutes or until lightly caramelized. Remove from heat.

In a small bowl, whisk mayonnaise, chipotle chilies in adobo sauce and cilantro. Set aside.

*Both chilies in adobo sauce and chipotle chili powder can be found in the Mexican food section of most major supermarkets as well as in Latin American markets. 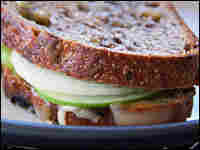 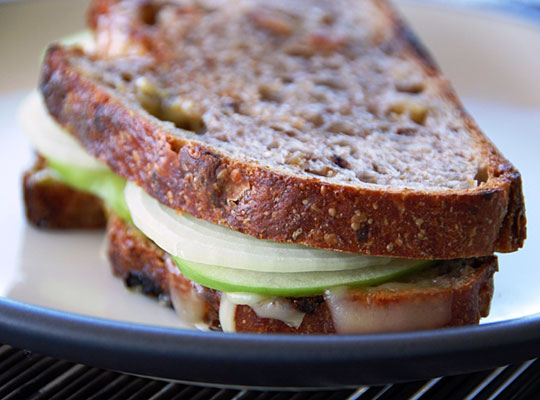 Sliced fruit such as fresh apples, pears, figs and grapes are ideal add-ins for grilled cheese. In this sandwich, Granny Smith apples add tartness and texture to balance the sharp sliced onion and smooth, mild Jarlsberg cheese. Both Gouda and Gruyere are delicious cheese alternatives. Fruit jellies and chutneys are good alternatives to fresh fruit.

In a small bowl, whisk Dijon, apple cider vinegar and honey. Set aside.

Butter one side of each slice of bread. Place slices, buttered side down, on a clean work surface. Top with Dijon-honey mixture. Pile shredded cheese evenly over two slices of bread. Top each with three slices of apple and half of the sliced onions. Season with salt and freshly ground black pepper. Top with the second slice of bread, buttered side up. Close the sandwiches.