Accessibility links
To Keep Your Brain Nimble As You Age, Stretch It Challenging your brain with mental exercises can improve your intelligence over the years and help stave off the dementia that comes with old age, says psychiatrist and author Richard Restak. He offers up a workout regimen to keep your brain fit. 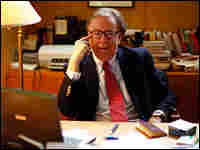 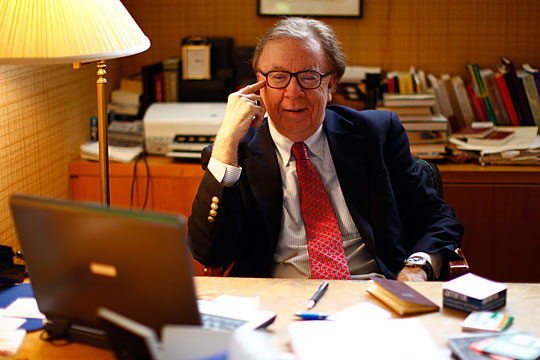 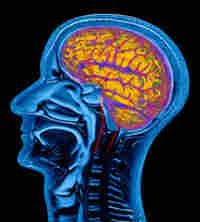 An MRI scan of a man's brain. Richard Restak says research shows that the brain responds to stretching and challenging exercises in every stage of life. Don Farral/Getty Images hide caption

If you sleep more, eat less and get plenty of exercise — using your body and your brain — says Richard Restak, you can improve your intelligence over the years and help stave off the dementia that comes with old age.

Restak, a psychiatrist in Washington, D.C., is the author of the just-published Think Smart: A Neuroscientist's Prescription for Improving Your Brain's Performance. Research shows, he says, that the brain responds to stretching and challenging exercises in every stage of life.

An older person "can still take up a language, you can learn to play bridge," he says, "and that establishes connections between neurons, and the synaptic density begins to increase."

In other words, as we get older, we can still get smarter.

The key, Restak says, is to exercise the three different types of memory: long-term memory, sensory memory and working memory.

"Long-term memory is just everything we know about history, things about our life, important dates, important things that happened, all the things that separate one person from another," Restak explains. "You could call it the treasure-trove of information that you have. So that's long-term memory, and we're forming it all the time."

He suggests an exercise to increase the strength of long-term memory: Choose a year in your past and associate it with what you were doing — where you were in school or where you were working. Then expand your recollections into other events in the world at large — sporting contests, political activities, major catastrophes and cultural happenings.

"It's called a reminiscent exercise," he says. "It can be used at any time in life."

There is controversy surrounding the ability to improve memory and intelligence through exercises. Torkel Klingberg, a Swedish brain researcher and author of The Overflowing Brain, says that "certain cognitive functions, such as attention, working memory and possibly reasoning ... can be affected by training." But he is less certain that exercises will strengthen long-term memory.

Restak says that we are constantly adding to our long-term memory, and learning to associate images or emotions with those memories will increase the chances of retrieval.

Your Brain On Peanut Butter

Sensory memory is the recall associated with the senses, such as touch, smell and hearing. Restak says, "Sensory memory is something you don't hear too much about, yet it's the most important part of laying down a memory: Paying attention to what's going on."

So go into the kitchen, close your eyes and ask someone to hand you each of those items — opened so you can sniff them — one by one. Or use spices. Or other familiar odors to connect your nose to your memory. Try to identify as many as you can. Then try again and see if you can improve your fragrance memory.

Of all forms of memory, the working memory is the most vital to our everyday lives. "That's the area of being able to keep in mind several things at once," Restak says.

And a self-quiz: Name the U.S. presidents, going backward from Barack Obama to John F. Kennedy. Then, arrange them in chronological order starting with Kennedy, assigning each his proper party affiliation (so, Kennedy — Democrat; Johnson — Democrat; etc.). Next, list them alphabetically. That ability to perform more than one function at a time, Restak says, stretches the working memory.

In the end, Restak believes we should think of the brain's growth over the years as a series of marathons. He credits Canadian neurologist Kenneth Rockwood with the metaphor. In Think Smart, Rockwood says, "As our brains age, we must prepare them to resist injury — equip them with good education, train them thoughtfully with challenging regimens, support them with nurturing environments and be prepared to refresh them from time to time."

Looking at the old noodle that way, Restak says, encourages an active brain — one that will keep working and stay fit through the years.