Accessibility links
Bill Would Let Patients Sue Medical Device Makers If an implanted medical device like a cardiac implant or artificial knee malfunctions, a patient can't sue. A Supreme Court ruling says all the manufacturers need is approval from the FDA to protect them from lawsuits. Some members of Congress want to change that. 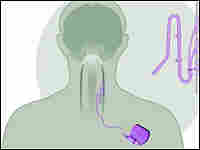 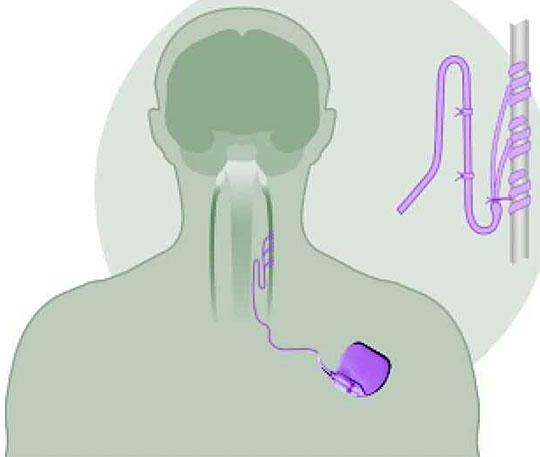 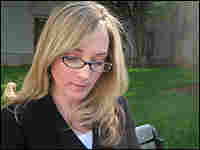 Bridget Robb suffered a series of painful electric shocks when her implanted cardiac defibrillator malfunctioned. She wants patients to have the right to sue when medical devices fail. Joanne Silberner/NPR hide caption 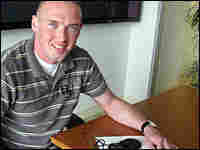 Adam Hammond is a former US Army Officer who was severely injured when his parachute failed to open. He says he could not function without his implanted neurostimulator and he thinks the restriction on lawsuits should remain. Joanne Silberner/NPR hide caption 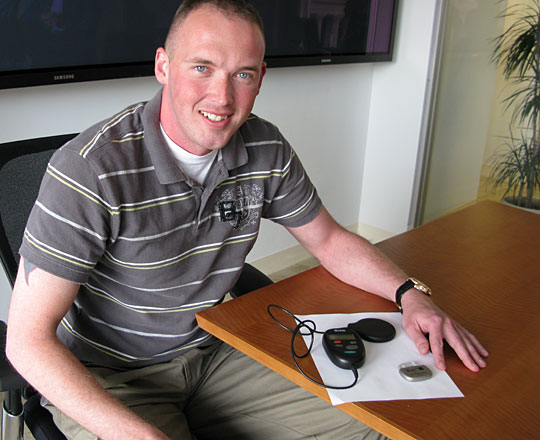 Adam Hammond is a former US Army Officer who was severely injured when his parachute failed to open. He says he could not function without his implanted neurostimulator and he thinks the restriction on lawsuits should remain.

The U.S. Supreme Court ruled in February 2008 that an OK from the Food and Drug Administration for a high-tech medical device is all a manufacturer needs to avoid being sued in state court.

Rep. Frank Pallone (D-NJ) wants to change that. "There are problems with medical devices that arise outside of the FDA approval process because that process is limited," he says. "And we should not preclude people from suing and recovering damages if something comes up."

Something did come up for Bridget Robb, a 35-year-old single mother who lives in Gwynedd, Pa. In 2005, Robb got an implantable defibrillator because she has a potentially fatal heart condition. The defibrillator was there to shock her heart back into rhythm if the drugs she was on failed.

"On Dec. 31, 2007, I suffered greatly and thought I was going to die because of a defective heart device implanted in my body," Robb told a hearing of the health subcommittee of the House Energy and Commerce Committee on Tuesday.

She said she felt like she was being electrocuted or like a cannon was being shot at her at close range. The device fired 31 times before doctors could stop it.

The device had been recalled by its manufacturer, Medtronic, several months before. The company had received multiple complaints from doctors and patients over the years. Robb eventually had the device removed, and she'd like to sue Medtronic.

"I find it discouraging and demoralizing that I have no recourse for my injuries," she testified.

The Role Of The FDA

But the prospect of suits in state courts, where juries decide whether a device is defective and shouldn't be on the market, disturbs leaders of the medical device industry.

Brett Loper, a senior vice president with AdvaMed, a medical device trade group, says that if a product has received approval from the FDA, that should suffice. "You could really create a decision where over time you unravel the science-focused authority of the FDA and in exchange have a system where regulation occurs via litigation," he says.

He trusts the FDA over state courts. "While there have been some questions in the last few years, it's still the gold standard," he says. "There's no question they have the most talented and capable experts."

AdvaMed has lined up allies, among them Adam Hammond. Hammond was on weekend leave from the Army when he had a parachuting accident. His chute opened up too quickly, making it difficult to maneuver, and he hit the ground at 45 mph.

When he came to six weeks later, he learned he had broken his back, tailbone, pelvis, right hip and femur. His pain was so great that despite handfuls of painkillers, he didn't move any farther than from his bed to his couch.

Then Hammond received a newly approved device, an implanted neurostimulator about half the size of a deck of cards. It interferes with the pain signals that would otherwise get to his brain.

"Everywhere I felt the pain I now feel a tingling," he says. He's now finishing up his undergraduate degree and plans on going to law school. Without the device, he says, "I'd probably still be where I was, going from bed to couch and couch to bed, and on tons of medications."

Hammond agrees with the device trade group — if people could sue, manufacturers would become very conservative.

The legislation introduced by Pallone and Henry Waxman (D-CA) in the House is matched by a Senate bill introduced by Edward Kennedy (D-MA) and Patrick Leahy (D-VT).

The legislation is likely to be hotly contested. Joe Barton (R-TX), ranking member of the House Energy and Commerce committee, said at the hearing, "I'd rather have the health experts at FDA determine whether a medical device is safe, not a trial lawyer or court."