Accessibility links
Hollywood Wannabes 'Party Down' On Starz Critic John Powers reviews the Starz comedy series Party Down, which follows a group of oddball dreamsers who work for a Hollywood catering company. 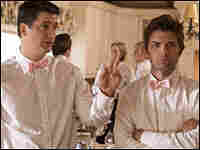 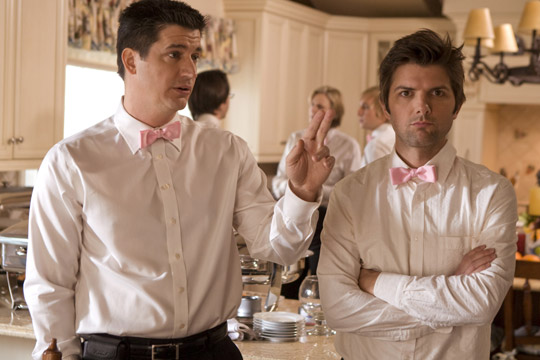 When I first moved out to Los Angeles, a friend joked that the city's motto should be, "But really I'm" — as in, "I work as a waiter, but really I'm an actor," or "I may be selling you jeans, but really I'm writing a script." Of course, most Angelenos actually don't have aspirations to show biz, but hundreds of thousands do dream of hitting it big even as they do jobs that feel small.

Theirs is the world of Party Down, a comedy series on Starz that might be the love child of Ricky Gervais and Judd Apatow. It's about Hollywood fringesters who work for a catering company called Party Down, and each half-hour episode takes place entirely at one of the events where they're serving — everything from high school reunions and porn-awards parties to ceremonies for a college conservative caucus.

We meet the Party Down team through the watchful eyes of its new bartender, Henry, played by Adam Scott, who looks like a flattened out version of Tom Cruise. Henry's a washed-out actor whose great claim to fame is a beer commercial where he says, "Are we having fun yet?" — a line superbly deployed throughout the series. Henry's instantly drawn to Casey, a struggling comedian played with enormous verbal brio by Lizzie Caplan, an actress who I find uncommonly fetching. Henry and Casey are the sharp ones along with Roman — that's the reliably acerbic Martin Starr — a wannabe screenwriter who loves sci-fi and yearns to get laid.

The other three are sweetly dim dreamers. There's the catering team leader Ron — played with manic desperation by Ken Marino — who dreams of opening a soup franchise restaurant. There's the cocky-but-sweet actor Kyle — that's Ryan Hansen, who has a delightfully easy style. And then there's Constance, a fading bit player who still talks about working with Jan Michael Vincent — she's played by Jane Lynch, one of our great comic treasures.

The show's backdrop changes from week to week. What's always the same are these six characters, who inhabit a sitcom riff on a Beckett universe where everyone is always at work and waiting for the break that will spring them from limbo. Until that happens, they swap stories and hook up, malinger and badmouth their clients.

When I first saw Party Down I thought the idea was better than the execution. Like many shows, it took a few episodes to hit its stride. Now, the show is genuinely funny and filled with terrific writing, as in the great scene when Roman blows his chances with a sci-fi loving porn actress named Cramzy because she likes the wrong kind of science-fiction, or the recent episode when Russian gangsters treat the Party Down team as celebrities, because Eastern Europe is one place where they actually show the straight-to-video movies and TV shows that actors like Kyle and Constance have been in.

The whiff of failure makes Party Down the flipside of that other Hollywood series, Entourage, whose ordinary guys get to live large — cool cars, hot chicks, fancy restaurants. Where that fizzy HBO series was an almost perfect expression of a bubble economy, Party Down seems just right for an economic downturn in which people still harbor oversized American dreams but know they need a job to survive. And though the show has fun with the characters' foibles and limitations — they're all slightly deformed by their ambitions — it avoids what we might call Day of the Locust Syndrome. It doesn't look at them as Little People or treat them with fear and disdain. It's affectionate.

Everything turns around Henry, who, as episodes spin out of control, remains the show's still center. Beautifully underplayed by Scott, he reveals himself in bone dry quips and almost imperceptible inner crumples that betray his mortified sense of his place in the world. Alone of the six, Henry has abandoned his hopes of the bigtime, but what's great is that this has made him humane, not cynical: Even when his coworkers are being foolish, he never looks down on their dreams. Wised up and sad, he's Party Down's hero and melancholy heart. He knows that he's not an actor. He really is a bartender.