Accessibility links
Elizabeth Edwards Should Tell The Truth! Love is complicated. Elizabeth Edwards knows this better than anyone. But American women already knew that. What we need now, says commentator Kristine Holmgren, is to hear the truth.

Elizabeth Edwards Should Tell The Truth!

Elizabeth Edwards Should Tell The Truth! 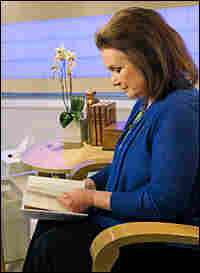 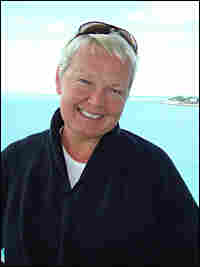 American women are not stupid. We lived through the Clinton administration, the Gary Hart scandal, the awful truth about John F. Kennedy.

Our mothers told us about Franklin Delano Roosevelt's liaison with Lucy Page Mercer Rutherfurd and how Eleanor Roosevelt soldiered on.

Heck, even Ike had a dirty little affair with an Army woman. American women understand. We know that powerful men, caught in the act of being themselves, hurt the women who love them.

My generation of women is even more savvy. Thanks to million-dollar book deals, we get to hear the rationale for standing by a sleazeball.

I watched Elizabeth Edwards on the Today show and wanted to climb into the set, put my arms around her and tell her to stop, stop, stop. I hate seeing Elizabeth Edwards reduced to an apologist for adultery. I want her to trash her new book, Resilience, and write her real truth. And in the time left to come, to walk in the sunshine of pride, decency and personal respect.

Elizabeth Edwards' children deserve more than the millions this book will deliver to their college funds. Her son needs to hear from a woman who holds accountable a man who publicly humiliated his mother. Her daughter needs to see her mother stand tall and reclaim her dignity and power.

But it doesn't matter what I want. Heck, I'm just a Midwest preacher, trying to make sense of our collective disrespect for human dignity. I can't look to Elizabeth Edwards to help me here. And who am I to judge? The woman needs to make her millions before she dies. So, she's selling some schmaltz about the virtue of a long-term marriage, even if the marriage is to a public joke.

John, she tells us, is a good man. So good, she says, that while this controversy swirls around her, he is in El Salvador, talking to suffering people. Neglecting, obviously, the suffering in his own home.

Elizabeth's painful, awful, cruel interviews seem to be the only suffering she is willing to dominate. She told Matt Lauer she "loves" John. She told Oprah that her love is "complicated."

Damn straight it's complicated. A federal investigation is looking into the $114,000 in campaign funds paid to a woman he apparently was sleeping with while he begged donors for more money to get elected.

Think of this — John wanders through El Salvador inspiring the poor. Elizabeth faces the camera and says her cancer has spread to her thighs.

So, no more lies, Elizabeth. Please, no more claptrap about "better or worse" or the "loving look" on the face of the man who screwed you and bamboozled the rest of us.

We are, after all American women. And we are not stupid.

Eleanor Roosevelt couldn't do it. Jackie Kennedy didn't do it. Lee Hart wouldn't. Heck, Lee actually said, "If my husband's infidelity doesn't bother me, why should it trouble anyone else?"

Good question. These adulterous men trouble American women. They trouble us to our national core.

Why? I'll tell you why. Elizabeth Edwards abandoned her personal ambition to support her husband's political career. She lost a child to early death. Her future was robbed by the constant pain of a devouring cancer that is destroying her bones.

Through it all, she asked only to raise a healthy family in a loving home. She wanted the American dream.

And if a man cannot be true to a lionhearted woman like Elizabeth, what hope is there for the rest of us?

There might be some, an iota perhaps, if someone, someone would tell the truth. Her book is titled Resilience. You must be kidding, Elizabeth. We're not stupid. Neither are you.

Before you die, tell us the real truth.

Kristine Holmgren is an ordained Presbyterian minister who lives and writes in St. Paul, Minn.