Accessibility links
Swine Flu Takes Toll On Mexico Tourism Industry The swine flu panic has faded, but the damage could be lasting to Mexico's tourism industry. Millions of dollars of have been lost from the country's third largest source of revenue. The Caribbean resort of Cancun has been particularly hard hit, with 22 hotels closed and about 10,000 workers furloughed.

Tourists are a rare sight on the beaches of Cancun, Mexico, since the swine flu outbreak. Hotels, restaurants, bars and other attractions in Cancun are empty as nervous tourists cancelled travel plans. Officials say recovery could be months away for the tourism industry, a vital part of the national economy. Jason Beaubien/NPR hide caption 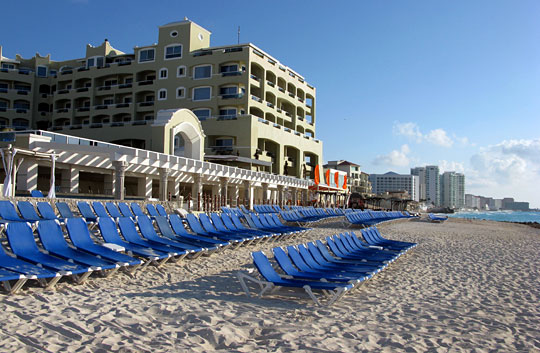 Tourists are a rare sight on the beaches of Cancun, Mexico, since the swine flu outbreak. Hotels, restaurants, bars and other attractions in Cancun are empty as nervous tourists cancelled travel plans. Officials say recovery could be months away for the tourism industry, a vital part of the national economy.

Americans Vicky Long and John Papadakous are savoring their Caribbean vacation in Mexico. The swine flu outbreak virtually emptied the white-sand beaches of Cancun, along with its bars and hotels, meaning there is plenty of staff to pamper the couple from Baltimore.

The swine flu crisis has been fortuitous for this pair of tourists. But it is not good for Mexico's vital tourism industry.

Most foreign tourists fled Mexico during the height of the swine flu scare; officials say it could take months for the industry to recover.

Mexico's economy is heavily dependent on revenue from foreigners. But swine flu hit the country hard and, in turn, damaged Mexico's image abroad. Mexico's tourism minister, Rodolfo Elizondo, predicts that the number of international visitors could drop in the coming weeks to "almost zero."

Even Long and Papadakous tried to cancel their trip. But lacking travel insurance, they would have lost their money. So they decided to take the trip despite the threat of swine flu. There were only 11 people on their flight from the United States, Long says.

"We were like, OK, let's go see what happens," Papadakous says, standing across the street from the Hard Rock Cafe. "At our hotel, they cater to us. Like, it's awesome not having that many people there, really. So it doesn't bother us."

Petroleum revenues and remittances both declined last year amid the global economic downturn. In 2008, the bright spot in the Mexican economy was tourism, which posted a 3.5 percent growth in revenue.

Even as Mexico's army was fighting a bloody war against the nation's drug cartels, the number of foreign visitors to Mexico grew in 2008 to a new record.

Swine flu threatens to erase those gains, not only in Cancun but across Mexico.

But the Cancun region relies on tourism like no other place in Mexico.

Cancun was conceived and developed by the Mexican government in the 1970s as an international beach resort on what was then a desolate strip of the Yucatan Peninsula. It has been booming ever since, fueled by an apparently insatiable appetite for hotels, condos and time shares on the Caribbean.

In the past two weeks, the number of international tourists arriving in Cancun has dropped 82 percent and the number of tourists from other parts of Mexico is down 40 percent, according to Sara Latife Ruiz Chavez, secretary for tourism for the state of Quintana Roo, which includes Cancun and the beaches known as the Maya Riviera.

Swine flu is costing the region millions of dollars in lost revenue and has forced 22 hotels to temporarily suspend their operations, she says.

More than 10,000 waiters, cooks, maids and other hotel employees in Cancun have been furloughed from their jobs. Dive boat owners say they're going out with just two or three customers. Jungle tour boats sit tied up at the docks. Parasail operators kick soccer balls on the empty beaches.

In April, before the swine flu virus, also known as H1N1, burst into the headlines, about 75 percent of Cancun's hotel rooms were occupied. Now, the occupancy rate is running at about 20 percent.

Even as the swine flu threat fades and any potential health threat is gone, government officials and business leaders fear people will continue to stay away from Mexico.

The country's tourism minister estimates that nationwide much-needed revenue from tourists could fall by 43 percent this year as a result of the outbreak.

In 2005, Cancun was battered by hurricane Wilma, causing billions of dollars in damage.

Rodrigo de la Pena, head of the Cancun hotel association, says the current situation is worse than a hurricane. During a storm people are busy, he says, and hotels have insurance to cover repairs and payroll.

"Now they're just waiting for people to come," he says. "When we have hurricanes everybody's working, everybody's cleaning and right now it's pretty different."

Why So Many Swine Flu Deaths In Mexico? May 7, 2009
Some Residents Flee As Mexico City Shuts Down May 3, 2009
Mexican Pig Farming Town Under The Microscope May 1, 2009