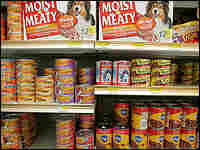 The discovery of the chemical melamine in U.S. pet and livestock food earlier this spring has triggered a wider FDA investigation into the possible contamination of food imports from China. The tainted pet food is blamed for killing cats and dogs in the United States, and has been traced to two Chinese manufacturers who added the chemical — used to make plastics and sterilize swimming pools — to wheat and rice products to make them appear protein-rich.

William Hubbard, former senior associate commissioner for policy, planning and legislation at the FDA, now works with the nonprofit, nonpartisan Coalition for a Stronger FDA. Here, Hubbard explains why the FDA's focus is increasingly on China, and whether consumers should worry.

The FDA has a system in place for inspecting food imports; why didn't it catch the melamine contamination?

There has been a tremendous increase in recent years in importations of foods and particularly food ingredients. And in many cases, those foods ingredients are coming from developing countries that do not have a strong food-safety inspection system. So the concern is that if the FDA can't look at those food ingredients, they are basically getting through freely.

Unfortunately, with 13 million food imports last year and only several hundred inspectors, the FDA was able to look at only about 1 percent of shipments at U.S. ports. And it rarely looks at food ingredients at all – such as the Chinese imports of wheat gluten (a protein in wheat) associated with the melamine contamination.

The FDA keeps a running list on its Web site of food imports it has rejected at U.S. ports, and the reasons. China consistently tops that list. Why?

China's export market for food ingredients has zoomed up in recent years. Individual shipments of food and ingredient exports from China to the United States have gone from 82,000 in 2002 to 199,000 in 2006. And I'm told by FDA officials that they're rapidly reaching up to 300,000 this year.

What are some of the reasons the FDA has refused imports from China?

A very common description will be illegal animal drugs, and what that means is a processor has given seafood — say fish — an illegal drug to treat either a bacterial or fungal infection or both. The common ones are malachite green for fungal infections or fluoroquinolones for antibiotic infections. These fish are often raised in polluted water, so they're given these drugs to treat them. The problem is, when these fish arrive in the United States, their tissue contains these illegal drugs. So the FDA attempts to identify shipments with these drugs and keep them out.

What is the problem for humans who eat fish with these residues of antibiotics or antifungals?

They can certainly contribute to antibiotic resistance, and in some cases, they can cause direct health effects, such as anemia. These are drugs that are not approved in the United States for use in these commodities, and they're viewed as dangerous, so the FDA attempts to keep them out. When a foreign processor is using them to make their fish stay alive, that's clearly a violation of U.S. law. But the FDA can't go to that country and force them to change their practices.

The FDA has no authority to require a foreign country to send us safe food. The U.S. Department of Agriculture can do that for meat. The USDA can say to a foreign exporter of meat, "You must show us that you are making safe meat before you even put it on the boat." But for the FDA, all the responsibility is on the agency to find the problem at the port. And when you have so few inspectors, many problems don't get found.

Some might say, "We aren't seeing a lot of people getting sick and dying because of bad food and pharmaceutical imports." Are we being alarmists?

In the case of pharmaceuticals, there's the recent example of diethylene glycol poisoning, which has been blamed for sickening adults and children around the world, even causing deaths.* It's been traced back to a Chinese firm that apparently substituted a chemical used in antifreeze for pharmaceutical-grade glycerine, which is a sweet-tasting thickener used in elixirs like cough syrup and toothpaste.

Should consumers be concerned?

You certainly need to know that many ingredients and foods are coming from other countries. But I think the food supply is safe. I think we can continue to consume our food with confidence. But the fear is that these examples are markers for an ever-increasing problem. And when you have what some consider a weak FDA, then that actually gives foreign exporters incentives to send us their bad stuff.

How do the FDA port inspectors decide what to look at?

They attempt to use a risk-assessment process that examines problems from a given country in the past or a given food in the past or a given importer in the past. That helps the FDA to target places that have been more problematic before — so they're not taking time with, say, frozen fish from Norway, which perhaps has never been a problem. Seafood from China, however, has been a persistent problem.

Why hasn't the FDA been inspecting shipments of food ingredients?

I don't think anyone was seeing the problem until the melamine contamination happened. And the FDA's resources are so stretched that it had to focus on where there had been historical problems, such as seafood and cheeses and other things. Now that the melamine problem has arisen, the FDA will have to shift resources to look at ingredients. Unfortunately, however, that means it will shift resources away from inspecting dairy products or seafood.

The reports are that the Chinese are selling these ingredients at very low cost. And some reports suggest that they're attempting to essentially capture the market in many cases. For instance, a very common preservative in all of our processed food is something called ascorbic acid – vitamin C. And I understand that 80 percent of the world's ascorbic acid is now made in China.

Are you saying manufacturers can't afford to go elsewhere for these imports, or that there isn't anywhere else to go?

Well, there's certainly the price differential. But I understand that there's only one ascorbic acid manufacturer left in the United States. If that's true, then that means that a processor is going to be hard-pressed to find a domestic source of ascorbic acid. And ascorbic acid is a safe and useful additive to preserve food.

What do you think should be done?

The government has got to step up to the plate and give the FDA more power. The FDA should be able to say to a country, "If you keep sending us unsafe food, we're going to embargo that food or even the entire country until you put in place a protective system."

* According to the Associated Press, diethylene glycol (DEG) was blamed for the deaths of at least 51 people in Panama last year after it was mixed into cough syrup, another case with allegations involving China. Between 1990 and 1998, similar incidents of DEG poisoning reportedly occurred in Argentina, Bangladesh, Haiti, India and Nigeria, killing hundreds.