Accessibility links
Why I Hired John Yoo John Yoo, author of the Bush administration torture memos, has signed a contract to write a monthly column for The Philadelphia Inquirer. Harold Jackson, the Inquirer's editorial page editor, explains the rationale behind hiring Yoo. 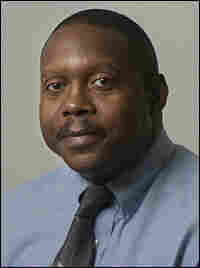 John Yoo, author of the Bush administration torture memos, has signed a contract to write a monthly column for The Philadelphia Inquirer. Harold Jackson, The Inquirer's editorial page editor, explains the rationale behind hiring Yoo. Click the link below for another point of view. 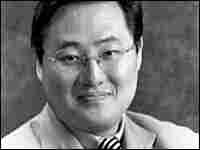 John Yoo, newest columnist for The Philadelphia Inquirer, was the author of the Bush administration torture memos. University of California, Berkeley/AP hide caption

Paris. Yes, the one in France.

That's the farthest point from which The Inquirer received e-mails protesting our contract with John Yoo to write a monthly column, which centers mostly on legal topics.

The hundreds of e-mails received are a testament to the power of the blogosphere and its superiority to newspapers in getting the word out about, well, about anything.

But I'll save my whining about the murky future of my preferred vehicle of employment for a later date.

Obviously, people would prefer that I talk about Yoo, the former Bush Justice Department official who penned memos legitimizing torture of terrorism suspects.

Unfortunately, most of the critics of our contract with Yoo have their facts wrong.

But that happens when your information comes from those bloggers who never let facts get in the way when they're trying to whip people into a frenzy to boost Web site hits.

It's a shame that one blogger who disseminated poor information is actually a full-time journalist for a sister publication in the Inquirer building.

To set the record straight, no one tried to hide Yoo's becoming a regular columnist. He had appeared in The Inquirer occasionally since 2005, and his commentaries became a monthly feature about eight months ago.

At that time, his columns began appearing with his photograph and a title, "Closing Arguments." Yoo's first regular column also announced that he would be appearing regularly.

The decision to publish Yoo monthly came at the suggestion of The Inquirer's publisher, Brian Tierney, who cited Yoo's mutual roots in Philadelphia as well as his legal scholarship — he is a law professor at the University of California, Berkeley

I had misgivings, but I believed our readers would place the move in context with the paper's clearly expressed criticism in numerous editorials of the Bush administration's use of torture.

I was wrong. From the beginning, we received letters and e-mails criticizing the hiring of Yoo. The criticism increased after his torture memos became public.

At our urging, Yoo wrote a column explaining his reasoning in writing the memos. That piece allowed our readers to hear him out and respond with their own thoughts about torture.

It was exactly what you want to see newspaper opinion pages do — provide the catalyst for intelligent discourse.

Allowing Yoo to have his say has not changed our editorial board's opinion that torture can never be justified.

Yoo has written on other subjects in which he and The Inquirer are in disagreement, including affirmative action (he's opposed to it in most cases) and what qualities the next Supreme Court justice should possess.

In the past two years, The Inquirer has consciously added other conservative voices to our daily op-ed page and Sunday opinion section to counter criticism that our editorials and columns always lean left.

Adding more conservative commentaries to our mix doesn't mean we have become right-wing in our editorial positions. It means we aren't afraid to let people hear what the other side has to say.

We think most of our readers aren't afraid either.

Our editorial board strives to take distinct positions on every topic we write about. But we also want to make sure our pages present alternative points of view.

That's the reason we run Yoo. Despite the suggestion of bloggers, there's nothing more nefarious at play.

There have been calls for Yoo's disbarment, or worse, for his work for President Bush. Many of the e-mails we have received are already calling him a "war criminal."

Whatever happens to Yoo, I hope to have his reaction in a column written exclusively for The Inquirer. Then, our readers will get their turn to respond to what he has to say.

When newspapers stop being a vehicle for thoughtful conversation, and instead provide an arena for one crowd to pummel the other crowd, without listening to what anyone else has to say, we might as well be the blogosphere — or talk radio.

I have met Yoo and found him to be very pleasant, even though we disagree on issues other than what constitutes torture.

Of all the criticism our paper has received concerning Yoo's contract, I actually agree with those who have expressed their displeasure with our paying him.

These days, newspapers are always looking for ways to cut costs. But not even I am willing to work for free, so I can't blame Yoo for wanting the same treatment.

A version of this story will run in Sunday's edition of The Philadelphia Inquirer.