Accessibility links
Illuminati: Pet Villains Strike Again In 'Angels & Demons' The new film Angels & Demons revolves around a group whose name has become synonymous with shadows and global conspiracy: the Illuminati. But how big — and how bad — are they really? 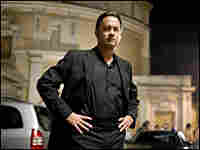 When in Rome: Robert Langdon (Tom Hanks) races to stop the Illuminati from destroying the church in the movie version of Dan Brown's thriller Angels & Demons. hide caption 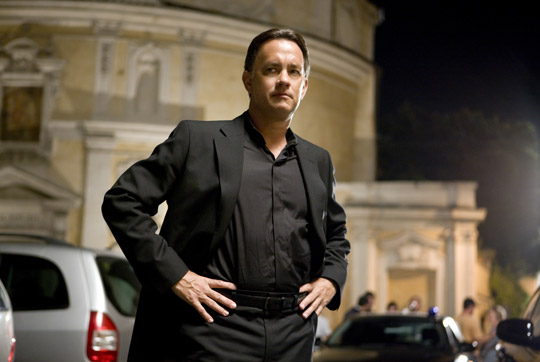 When in Rome: Robert Langdon (Tom Hanks) races to stop the Illuminati from destroying the church in the movie version of Dan Brown's thriller Angels & Demons.

"Presumably in response to criticism that The Da Vinci Code was static and talky, director Ron Howard has made Angels & Demons frantic ... and talky. He's gotten quite good at making statues look threatening, and when it comes to murder in the cinematic cathedral, he may now be Hollywood's go-to guy."

Need to know more? Visit NPR.org/Movies on May 15 for the full review.

Rome, nighttime: Thousands of Romans jam St. Peter's Square, eagerly craning their heads toward the Vatican to see if and when a new pope is announced.

Suddenly a child screams: She has seen a dead cleric slumped on the marble stairs.

In short order, several other holy men are found dead inside the Vatican — with markings on them that suggest the work of a single group. Enter Tom Hanks as suave, cynical Harvard religion professor Robert Langdon.

And with that, viewers of Angels & Demons — the newest movie from the thriller franchise that brought us The Da Vinci Code — are off and running with Langdon, trying to trace the path of the Illuminati to stop them.

The Illuminati? Langdon describes them as "a secret society dedicated to scientific truth; the Catholic Church ordered a brutal massacre to silence them forever. They've come for their revenge."

Maybe in books and movies. But while the real Illuminati were indeed a secretive order, they were in no way violent, says University of Oregon historian Ian McNeely.

"Their aim was to reform society peaceably," McNeely says. The group was formed in Bavaria by a church historian, Adam Weishaupt, in 1776. (And yes, that's just a coincidence.)

Which doesn't preclude an abiding contemporary interest in them, and in other secret societies — especially among a certain subset of American culture. To shamelessly rip off Groucho Marx: "I wouldn't want to belong to a club that would have me as a member — but I do wanna know all about it!"

The Allure of 'It's All Just A Few Puppeteers'

When reporter and author George Johnson started the two-decade project that would become his book Architects of Fear, only a small minority of people — most of them dedicated paranoid conspiracy theorists, he says — knew who the Illuminati were.

Now, he says, "You just put Illuminati in the Google box, and it's astonishing what pops up." (Go ahead: We dare you.) "The idea that it's all just a few puppeteers makes it all seem simple," Johnson says.

Apparently so. The Illuminati keep showing up — and not just in conspiracy-theorist chat groups, but in movies, video games, thrillers, even hip-hop music. (Just ask Fatboy Slim.)

Who the Illuminati are in each context depends on who you want them to be — which makes them irresistible to both conspiracy theorists and purveyors of pop-culture artifacts in which conspiracy plays a role.

"It's just this legend that floats through history, that gets contorted according to people's own needs," Johnson says.

The Illuminati brand often comes up in the wake of catastrophe. It's not hard to find people who fervently believe the Illuminati were responsible for the Oklahoma City bombings. And the Sept. 11 attacks.

Running The Fed? (Or: Careful What You Wish For)

And the Illuminati often get blamed when the economy tanks — because they're manipulating it to do that, right?

"One of the staples of conspiracy theory is that the Illuminati control the Federal Reserve," the University of Oregon's McNeely notes.

He has been interested to see that, despite the turmoil from the recent economic meltdown, he hasn't heard a lot of that kind of talk this time around — at least not in the U.S.

"Maybe that means we're growing up," he offers cheerfully.

Or maybe that means people really don't believe it — because if the Illuminati were actually running the Fed, things would be way more organized, right?

We incorrectly identified the video game featuring the audio of the Illuminati as "Resident Evil 4." In fact, the clip was from "Deus Ex."