Accessibility links
After 45 Years, A Guarneri Quartet Farewell Forming a string quartet in the 1960s was an improbable dream for the Guarneri Quartet members. Now, after more than four decades of concerts and recordings, they look back on their long career as they prepare to retire.

Hear the venerable quartet in recordings over the decades. 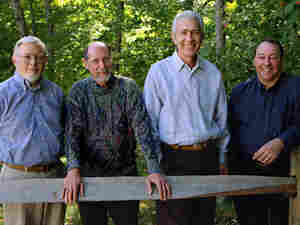 After 45 years, the Guarneri Quartet is going on a farewell tour. Dorothea von Haeften hide caption

The members of the Guarneri Quartet — at least its three original members — have known each other for a long time. They went to music school together and, just for fun, played string quartets. Now, 45 years later, violinists Arnold Steinhardt and John Dalley, violist Michael Tree, plus relative newcomer cellist Peter Wiley are still playing concerts filled with Beethoven, Mozart, Dvorak and Schubert. But not for long.

This fall, the famed Guarneris are calling it quits. And, as they told NPR's Rebecca Roberts recently during a rehearsal at the University of Maryland, it didn't take them long to make the decision.

"I think we had about four minutes to decide," violist Michael Tree says. "Because we had to be on stage — this was backstage at a concert in New York — and we had no trouble agreeing immediately."

First violinist Steinhardt butts in to remind Tree that they did indeed "sleep on it," but when they next talked about quitting, they all agreed quickly.

"I think we felt that it would be better to retire when we were still playing pretty well," Steinhardt says. "You know a lot of people come backstage and say 'You shouldn't retire — the concert was so great.' Well, I always think, that's the time to retire. Forty-five years is a fantastic run. Let's not be too greedy."

The Guarneris (including original cellist David Soyer, who instructed Wiley) played music together for fun at first, and Steinhardt says the idea of forming a string quartet in the 1960s, when there weren't that many around, was an improbable dream. Eventually, their impromptu performances became full-fledged concerts at school and elsewhere. As they began spending more time together each year at the Marlboro Music Festival in Vermont, Steinhardt says, the formal establishment of the quartet "just happened."

It's often been said that playing in a string quartet is like being in a marriage. The advantages include the ability to practically finish one another's musical sentences. But the challenge is how to keep the musical marriage sounding fresh night after night and to keep the bickering to a minimum.

But the question the Guarneris are often asked is how they do it — how they've spent so many decades working so closely together. Tree says the group never came up with a great answer.

"There are certain things that are quite obvious," Tree says. "We all have to have respect — mutual respect for each other. And we have to have a certain sameness, I think, of tastes. For example, if there were someone in the group that were just gung-ho on playing very, very experimental, avant-garde music, that could cause a little bit of dissension because that's an entirely different outlook. I think we all basically agreed on just about everything, except when it came down to the nitty-gritty of rehearsing. And that's when that question of mutual respect comes into play and it becomes very important."

Steinhardt offered another explanation: "We are like four brothers in a family, and we are not shy about saying 'That was too loud!' or 'We've got to fix that intonation there' or 'Why such a quick tempo? Mozart didn't write a quick tempo!' So we're above board about all these things, really like people in a family who can dismiss the polite stuff, you know?"

The Guarneri Quartet will give its final performances this October in Florida.