Accessibility links
Recession Diary: The Long And Winding Road Home Back in March, Caitlin Shetterly and her husband, Daniel Davis, had a 2-month-old son, an empty bank account and an apartment in Los Angeles they could no longer afford. The couple decided to pack up and head home to Maine to move in with Shetterly's mother. 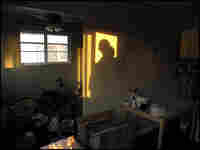 Caitlin Shetterly and her husband, Daniel Davis, moved out of their Los Angeles apartment a few weeks ago and drove across the country with their dog and infant son to live with her mother in Maine. Daniel E. Davis for NPR/www.danieledavisphotography.com hide caption 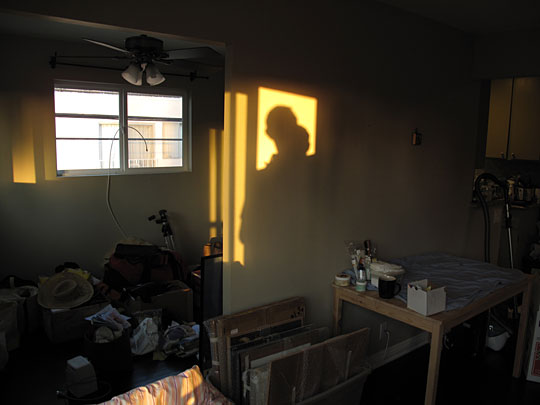 Caitlin Shetterly and her husband, Daniel Davis, moved out of their Los Angeles apartment a few weeks ago and drove across the country with their dog and infant son to live with her mother in Maine. 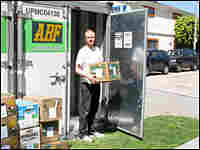 Dan packs for the move back East. In addition to trying to book photo work, Dan applied for hundreds of jobs on Craigslist and went to restaurants, hotels, coffee shops and supermarkets — with no luck. Courtesy of Tom Shetterly hide caption 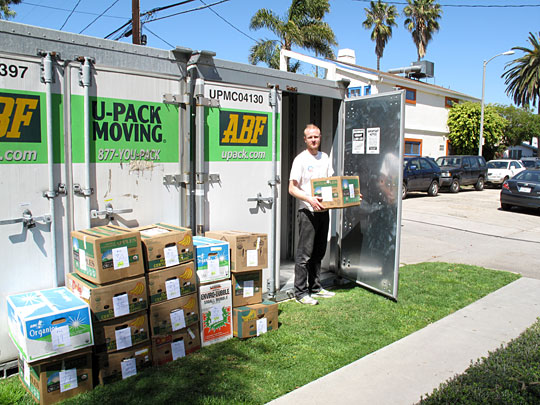 Dan packs for the move back East. In addition to trying to book photo work, Dan applied for hundreds of jobs on Craigslist and went to restaurants, hotels, coffee shops and supermarkets — with no luck.

Caitlin and the baby share a quiet moment during the 10-day cross-country trip. Daniel E. Davis for NPR hide caption 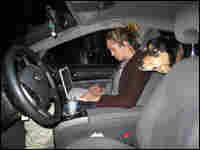 During a break on their road trip, Caitlin uses her laptop while Hopper looks on. Daniel E. Davis for NPR hide caption 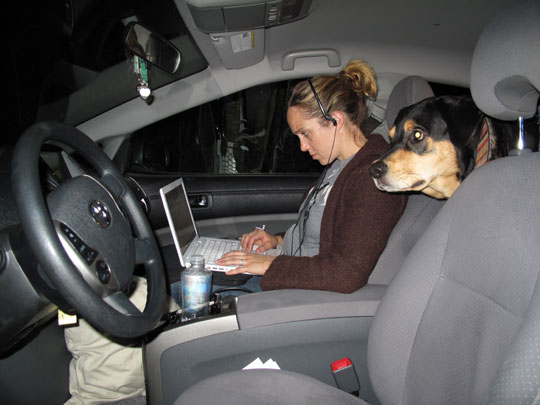 During a break on their road trip, Caitlin uses her laptop while Hopper looks on.

Back in March, Caitlin Shetterly and her husband, Daniel Davis, had a 2-month-old son, an empty bank account and an apartment in Los Angeles they could no longer afford.

Davis, a freelance commercial photographer, hadn't booked a job since December because of the recession. With a new baby, Shetterly, who works as a freelance public radio reporter, had been counting on his income. It looked like their only option was to pack up and head home to Maine to move in with Shetterly's mother.

Here, Shetterly shares what's happened in the past few months.

I kept wishing for a miracle. But late one night, toward the end of March, after applying for hundreds of jobs to no avail, Dan told me he wanted to go home.

"You know I hate saying that because I feel like we're selling our dreams down the river, but this is how I feel," Dan said. "I feel like this situation makes me want to smash something but the situation itself is already smashing everything so there's nothing for me to get angry and break about, it's like I can't even break my own dreams because they're being broken for me."

The next day we started packing. Ten days later, we hit the road. We crawled across the country, stopping every hour or so to nurse the baby, change some diapers and set out again. One night in a motel, as the baby slept, Dan was starting to lose his temper.

"Cait, we have too much stuff," he said. "I can't even see out the back window. The back tires are pretty much touching the frame of the car, and then you go into the grocery store and buy three bags of snacks for our road trip."

In the time capsule of our small car, packed to the gills with gear, three people and a 90-pound dog, the panorama of America flashed by our windows like a movie set to the soundtrack of our son's musical mobile.

In Oklahoma, the wind whipped across the prairie and tossed the car around. Arkansas appeared like a verdant Eden after the dry heat of the southwest, and then we got snowed-in in Tennessee. We were still about 1,200 miles away from home, and Dan, who was doing all the driving as I distracted the baby, was getting tired. I asked whether he was tired from driving or tired of the whole thing.

"The whole thing," he said. "It's been a long couple of days, between a crying baby, a stressed out family and a depressed dog, and not moving as quickly as I would like to be moving."

Even so, two days later, we made it to New York, then to Boston and finally to Maine. It took us 10 days to cross America. I asked Dan, who had driven the entire way, if he wanted me to drive this last leg of our journey.

"Look, for one, I don't trust your driving. And for two, I feel responsible for driving us across the country and moving us to Los Angeles," he said. "You know, I drove us out, and I want to drive us back in."

Later that night, we pulled in to my father, Robert's, house for dinner. My father walked out with a beer and handed it to Dan.

"It's so wonderful to see you here," my dad said. "I mean, I know what you've been through and just how difficult everything's been, but what an incredible upside to all these trials, having you home. Whatever comes next, this is the best."

After a stuffed haddock dinner, we drove the final 20 miles to my mother's home. It was late, so we tiptoed in to find a room all set up for us. It was more lovely than either of us could have anticipated. She had put up all kinds of pictures of me as a kid, as a little girl, and the bed was really beautifully made.

We still aren't making anywhere nearly enough money to get by. But after a couple of weeks, we're settling in to the rhythms of family. One evening, while the spring peepers made their crazy music outside, my mother, Susan, told me how glad she is to have us.

"The nice thing about it is you guys are first of all tolerant and you make wonderful dinners and wash the dishes very well and its fun to clean up with you on Saturday and Dan's outside helping me with the garden, which I really don't think I could have done alone this year," she said. "So for me, it's a treasure and, um, it makes me think about the old way of doing things, when there were multigenerational families, and for the small amount of time that we have together, it makes me realize the richness of that."

When we drove into Los Angeles a little more than a year ago, full of big dreams and boundless ambitions, we played Solomon Burke's "Millionaire" and sang it at the top of our lungs with the windows down:

They say love is more precious than gold,
Can't be bought and it can't be sold.
I got love, love to spare,
And that makes me a millionaire.

When we drove out of L.A., we played it again. Maybe that's the real story here — that despite everything we lost, what we got in the end was a deeper sense of family. And that, actually, as we rebuild our lives, might really make us millionaires.

When my pockets are empty,
And the cupboard is bare,
I still feel
Like a millionaire.