Accessibility links
Sex Offenders Forced To Live Under Miami Bridge Sex offenders with few resources who want to stay in Miami have just one option: an encampment of tents and shacks under a causeway. What began as a stopgap solution to a city ordinance limiting where offenders can live has become de facto public policy. 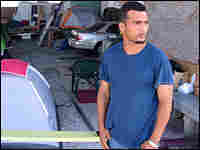 Juan Martin is one of nearly 70 convicted sex offenders who live under the bridge on Miami's Julia Tuttle Causeway. Greg Allen/NPR hide caption 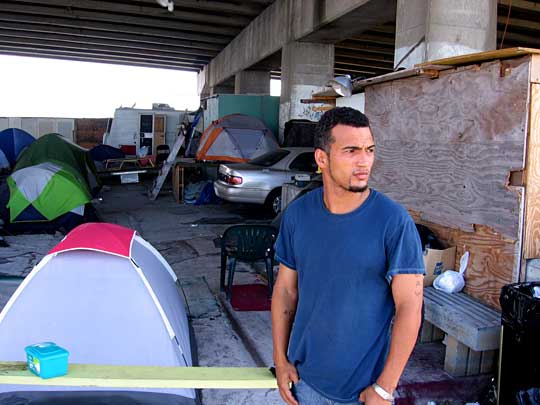 Juan Martin is one of nearly 70 convicted sex offenders who live under the bridge on Miami's Julia Tuttle Causeway.

In Miami, a causeway in the middle of Biscayne Bay has become home to one of the county's least desirable populations: sex offenders.

What began a few years ago as a stopgap solution has become de facto public policy. For sex offenders with few resources who want to stay in Miami, there's just one option: an encampment of tents and shacks on the Julia Tuttle Causeway.

The encampment got started a few years ago, when Miami-Dade County, like other communities across the country, adopted an ordinance banning sex offenders from living within 2,500 feet of anywhere that children gather.

It's a law that applies not just to sex offenders on probation but also to felons who have served their time — people like 31-year-old Juan Martin. He served an eight-year sentence for exposing himself to a teenaged girl.

After Martin got out of prison in 2006, his probation officer brought him to what at that time was just a small camp of several men and a few tents under the bridge on the causeway. After three years of living here, he's angry. He says, "The state is forcing you to live like an animal."

What once was a collection of tents has now become a small village. There are a half-dozen shacks, some with kitchens and working toilets. A few of the men have built a dock for fishing where some small boats are tied up.

Right now, 67 people live here. And nearly every week, probation officers drop off sex offenders, recently released, who have nowhere else to go.

Voncel Johnson recently became the first woman who was told she'd have to live under the bridge. She says when her probation officer dropped her off at the camp, it was unexpected and frightening.

"I'm thinking she's bringing me to a three-quarter-way house," Johnson recalls. "But when I got here it was ... pitch dark. The first thing I saw was men, and I'm the only lady here. ... I broke down. I'm asking her, 'Why do I have to be here?'"

Johnson pleaded guilty to a charge that she exposed herself to a friend's children — an incident she now says never happened.

As Martin says, the people who live under the bridge aren't saints.

'People Break Down So Bad'

During the day, most of the people who live in the encampment leave for jobs or to visit their families until evening, when their curfews require them to come back and live in what Martin calls inhumane conditions.

"We've had two heart attacks here," he says. "And we've had a couple of times where people break down so bad — they don't eat, they try suicide attempts."

Martin shows me his left arm, where there are scars that he says are from his own suicide attempts.

Safer With 'An Army of Angry, Homeless' Offenders?

State prison officials and probation officers are not happy about the situation under the bridge. They believe it is leading sex offenders to stop registering with the state and go underground.

That's one reason why state Sen. David Aronberg has been working to replace the hodgepodge of county and city ordinances with a new state law. It would set a single 1,500-foot restriction for sex offenders that would enable them to find housing inside of communities.

And, unlike the current law in Miami, it would also restrict sex offenders' movements during the day, creating child-protection zones that would keep offenders away from places where children congregate.

Aronberg says the laws as currently written make little sense. He asks, "How is it that an army of angry homeless sex offenders who are roaming our streets [makes] us safer?"

So far, officials in Miami-Dade County say they see no reason to change the ordinance.

Jose "Pepe" Diaz is one of the county commissioners who sponsored the law. He concedes that the growing encampment presents health and safety problems but notes that it's the state, not the county, that's put the sex offenders there. And that's a population for which he has little or no sympathy.

He says, "I have to deal with people everyday that I get calls from ... looking for jobs because they lost their house, they don't have a job. That's my most important priority."

The fact is, about half the counties in Florida now have an ordinance similar to the one in Miami. There are fewer and fewer places sex offenders can legally live in the state after they are released from prison.

Fred Grimm, a columnist for The Miami Herald, has been a regular visitor to the camp on the Julia Tuttle Causeway.

Grimm is convinced that county officials know they made a mistake but are waiting for outside forces — action by the Legislature or a lawsuit — to resolve the problem.

"You don't lose votes by being tough on sex offenders," he says. "We've all seen... spontaneous homeless camps pop up. But this is a camp created by public policy."

And it's a camp that is getting crowded. The space under the causeway can't handle too many more people.

Miami-Dade County officials may have to find a new location for sex offenders or take them north to Broward County. A highway bridge there recently became home to the region's second encampment of sex offenders.