Accessibility links
Rossini's Subtle Sequel: 'The Turk In Italy' Superficially, Rossini's opera may seem like a blatant rehash of his famous comedy, The Italian Girl in Algiers. A closer look reveals a deceptive drama, with a shadow of sadness darkening its comic facade.

Rossini's "The Turk in Italy"

From The Teatro Carlo Felice In Genoa

Rossini's "The Turk in Italy"

In Act Two, Rossini serves up a brilliant quintet when Selim and Zaida meet up with Narciso and Fiorilla — who are disguised as Selim and Zaida — while the helplessly lovesick Geronio looks on with mounting confusion.

Quintet from "The Turk in Italy"

Early in the opera, when Fiorilla informs husband Geronio that he's not as "loveable" as he once was, the two sing a complex duet — "Per piacere all signora" — as Geronio wonders exactly what she wants from him. It's sung by Myrto Papatanasiu and Bruno de Simone.

In the world of modern movie making, sequels can be seen as a blessing, or a bane — and the line between the two can be a thin one. 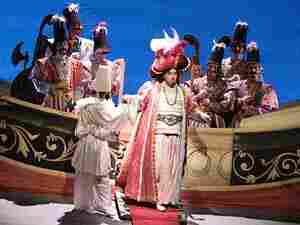 In the 1980s, for example, Steven Spielberg, George Lucas and Harrison Ford hit it big with Raiders of the Lost Ark, and with two more Indiana Jones movies after that. On the other hand, many wondered whether the appearance of a more grandfatherly Indy in 2008's Indiana Jones and the Kingdom of the Crystal Skull might have taken things a bit too far. And what about Sylvester Stallone showing up in Rocky Balboa in 2006, 30 years after the Oscar-winnning original? Was that a good idea?

Still, despite the pitfalls sequels can bring, it's easy to see the appeal — especially in the profit-obsessed world of Hollywood studios. Why pay for a lot of bothersome creative talent to come up with new ideas, when you can take an old premise, tweak it a little and hit the box-office jackpot all over again? Thinking in those terms, the sequel scheme — or scam — makes a lot of sense. And the idea certainly wasn't born in Hollywood.

From Slapstick To Subtlety

In 1814, Gioachino Rossini came up with a comic opera called Il Turco in Italia — The Turk in Italy. At the time, Rossini was one of the most popular and prolific opera composers in Europe, and it seemed that everything he wrote immediately turned to gold. But the reaction to The Turk in Italy was decidedly cool.

That's because the year before, Rossini had a smash hit with a comedy called L'Italiana in Algeri — The Italian Girl in Algiers. The titles of the two operas make it sound like Rossini took the first opera and simply reversed its premise to come up with a new one — and that's basically what he did. So it's no wonder that the ticket-buying public felt a bit shortchanged.

In retrospect, Rossini may have created a new opera out of an old story, taking an artistic shortcut in the process. But he also did something rare in the world of modern-day sequels: He used the recycled premise to create an entirely different sort of work.

The Italian Girl in Algiers is a brilliant comedy, full of sparkling melodies, blockbuster solo arias and strings of slapstick scenes that are laugh-out-loud funny.

The Turk in Italy, on the other hand, has a different set of strengths. Musically, it relies less on arias than on complex ensembles — duets, trios and even a quintet. Dramatically, the opera draws more than its share of laughs. But, like many fine operatic comedies, it also has a slightly disturbing edge. The opera's laughs often come at the expense of its less fortunate characters, who appear confused and emotionally disoriented. Their dilemmas may seem outwardly silly, but the feelings underlying them go beyond comedy to reflect the sense of helplessness that so often accompanies life's bleaker moments.

On World of Opera, host Lisa Simeone brings us a production of Il Turco in Italia from one of Italy's finest regional theaters, the Teatro Carlo Felice in Genoa. It stars bass-baritone Simone Alaimo as Selim, the title character; soprano Myrto Paptanasiu as Fiorilla, the woman who catches his eye; and baritone Bruno de Simone as Geronio, the abandoned husband whose troubles cast a shadow of sadness on the opera's gleaming, comic facade.

The Story Of 'The Turk In Italy' 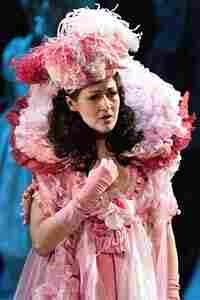 Fiorilla (soprano Myrto Papatanasiu) is decked out for the costume ball, in Act Two of The Turk in Italy. Marcello Orselli/Teatro Carlo Felice hide caption

ACT ONE begins near a gypsy camp outside Naples, where we meet Prosdocimo, a local poet. He needs ideas for a romantic comedy, and he's about to get plenty of new material.

Prosdocimo first encounters the young woman Zaida. She's a former Turkish slave who fell in love with her master, a prince named Selim. She was actually engaged to marry him — until some sort of palace intrigue got her in trouble and she fled to Italy. Now, she's encouraged when she hears that a Turkish prince is about to visit. Maybe, she thinks, he can put in a good word for her back home.

As it turns out, the prince who arrives is Selim himself, and he's looking for love. But the woman he falls for is not Zaida. Instead, he has an eye for Fiorilla, a young Italian woman. She's married to Geronio, but her affections sometimes wander. Fiorilla feels she has an endless capacity for love, and she thinks it's silly to limit herself to only one man. She already has an admirer — Geronio's friend Narciso — and she's more than willing to entertain the visiting Selim, as well.

Seeing all this, the poet has plenty of stuff for his romantic comedy. Geronio is already jealous of Narciso, and now they're both envious of Selim, who immediately moves in on Fiorilla. Soon, it gets even more complicated. By the end of the first act, Selim is reunited with Zaida, and that sets up yet another rivalry — between Zaida and Fiorilla.

As ACT TWO opens, Selim is drinking in a tavern. He tells Geronio that in Turkey, it's customary for a prince who wants another man's wife to make a fair offer, and buy the woman from her husband. Geronio tells Selim that in Italy, it's the custom for jealous husbands to offer boorish Turkish princes a quick punch in the nose.

This discussion gets nowhere fast, and when the two men leave, Fiorilla shows up. She's been invited to the tavern by Selim, and he soon returns. But this time, he's with Zaida — his former fiancee, who wants him back. The two women ask him to make up his mind. Which one does he want? He says he can't decide, so Zaida basically tells Fiorilla, "You can have the bum." But nothing's going to be quite that easy.

There's a costume ball on the calendar. Selim plans to attend, and use the festivities as a cover to abduct Fiorilla. Prosdocimo, the poet, has been coaxing the action along, reaping more and more material for a play. So he tells Geronio about Selim's plan. Meanwhile, there's Narciso, who also wants Fiorilla. Narciso decides he'll go to the ball dressed as Selim and try to take Fiorilla for himself. Zaida is also headed for the ball. She'll dress as Fiorilla, hoping Selim will abduct her by mistake.

Not surprisingly, the ball is a scene of mounting confusion. It culminates in a brilliant comic quintet involving Selim and Fiorilla; Narciso and Zaida, who are dressed as Selim and Fiorilla; and the unfortunate Geronio, who's growing more desperate by the minute.

Eventually, Prosdocimo urges poor Geronio to put on a brave front and pretend to dump Fiorilla. This show of manly defiance does the trick. By the time the opera ends, Fiorilla is back with Geronio and Selim is sailing for Turkey, taking Zaida with him.