Accessibility links
Bunk Busters Unravel the Art of Spin As Washington politicians and spin doctors gear up for a new campaign season, the founders of FactCheck.org are offering a decoder ring for separating fact from disinformation in a new book, unSpun: Finding Facts in a World of Disinformation. 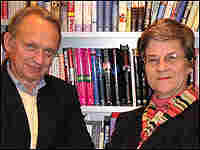 Jamieson and Jackson on How Politicians Fight Back Against Attacks

The presidential election is more than a year away, but political candidates and their spin doctors are already bombarding the American public with their messages.

As Washington gears up for a new season of political doublespeak, the founders of the Web site FactCheck.org are offering a decoder ring for separating fact from disinformation.

In their new book, unSpun: Finding Facts in a World of Disinformation, authors Brooks Jackson and Kathleen Hall Jamieson offer tips on how to cut through the haze of media reporting to be a savvier consumer and a better-informed citizen.

Spin, they say, "is a polite word for deception," and deception is everywhere — from the cosmetics counter to the presidential podium. Jackson and Jamieson review warning signs everyone should know and delve into Washington's use of "fear, uncertainty and doubt" or "FUD" to gain support for the 2003 invasion of Iraq.

"If it's scary, be wary" they warn, citing an ad aired from the 2004 Bush campaign that used ominous music, scary images of wolves, and a World Trade Center reference to convince viewers that if John Kerry became president, he would leave America defenseless against terrorists. In their research, the authors discovered that the ad referred to the 1993 World Trade Center attack, and that before Sept. 11, 2001, Kerry had repeatedly voted to increase intelligence spending. 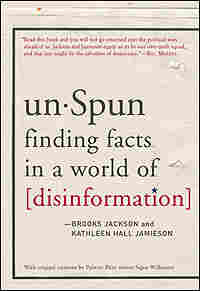 From Snake Oil to Emu Oil

A century ago a self-proclaimed cowboy named Clark Stan- ley, calling himself the Rattlesnake King, peddled a product he called Snake Oil Liniment. He claimed it was "good for man and beast" and brought immediate relief from "pain and lameness." Stanley sold it for 50 cents a bottle—the equivalent of more than $10 today—as a remedy for rheumatism, toothache, sciatica, and "bites of animals, insects and reptiles," among other ailments. To promote his pricey cure-all, Stanley publicly slaughtered rattlesnakes at the Chicago World's Fair of 1893.

Stanley was the most famous of the snake-oil salesmen, back before passage of the federal Pure Food and Drug Act in 1906. And he was a fraud. When the federal government finally got around to seizing some of Stanley's product in 1915, the Department of Agriculture's Bureau of Chemistry (forerunner of today's Food and Drug Administration) determined that it "consisted principally of a light mineral oil (petroleum product) mixed with about 1 per cent of fatty oil (probably beef fat), capsicum, and possibly a trace of camphor and turpentine." And no actual snake oil. Stanley was charged with violating the federal food and drug act. He didn't contest the charge and was fined $20.

Are today's pitchmen and hucksters any less deceptive? We don't think so. "Snake oil" has a bad name these days (at least in the United States; in China, it is used to relieve joint pain). But in 2006 we found another animal-oil product that—according to its marketer—is "much better than Botox! [and] Makes Wrinkles Almost Invisible to the Naked Eye! . . . Look as much as 20-years younger . . . in less than one minute." The maker even claims that the product won't just hide wrinkles, with repeated use it may eliminate them: "It is possible your wrinkles will no longer even exist." The name of the product is Deception Wrinkle-Cheating Cream. How appropriate.

According to Planet Emu, the marketer, this scientific miracle contains "the only triple-refined emu oil in the world," but we quickly determined that this product is nothing more than triple-refined hokum. Emus are those big, flightless Australian birds; the oil is said to be an ancient Aboriginal remedy. But when we asked Planet Emu for proof of their claims, they cited only one scientific study of emu oil's cosmetic properties, and it had nothing to do with wrinkles. It found that emu oil was rated better than mineral oil as a moisturizer by eleven test subjects. We searched the medical literature for ourselves and found some scanty evidence that emu oil may promote healing of burns in rats. We found no testing of emu oil as a wrinkle cream, much less any testing that compared it with Botox.

That's where a century of progress in product promotion has gotten us: from baseless claims for snake oil to baseless claims for emu oil. The products change, but the techniques of deception (small "d") are as underhanded now as they were in the days of Clark Stanley. Meanwhile the price has gone up. "Deception" emu-oil wrinkle cream, at $40 for three quarters of an ounce, costs four times more than a bottle of its snake-oil forebear, even after adjusting for a century of inflation.

Bunk is fairly typical of beauty products. "All the cosmetics companies use basically the same chemicals," a former cosmetics chemist, Heinz J. Eiermann, told The Washington Post way back in 1982. "It is all the same quality stuff." Eiermann was then head of the Food and Drug Administration's division of cosmetics technology. His conclusion: "Much of what you pay for is make-believe."

Cosmetics advertising is just one example of the rampant deception that surrounds us. Spin pervades both commerce and politics, and most of it is not so funny. As we'll soon see, any number of products with household names are marketed with false or deceptive advertising. Whole companies have been built on such deception. Elections have been decided by voters who believed false ideas fed to them by manipulative television ads and expressed in "talking points," and if you voted for a presidential candidate in 2004 the odds are you were one of them. The U.S.-led invasion of Iraq wasn't the first American war fought with the passionate support of a public that believed claims about the enemy that turned out to be false.

We've found that whether the spin is political, commercial, or ideological, and whether the stakes are trivial (as with $40 wrinkle remedies) or, quite literally, life and death, the ways by which we are deceived are consistent and not so hard to recognize. The first step in confronting spin is to open our eyes to how often we encounter it. It's so common, so all-pervading, that we can't avoid it.

Some examples from commercial advertising:

•Bayer HealthCare once advertised Aleve pain medication as "Prescription Strength Relief Without a Prescription." It wasn't. The maximum recommended dose of Aleve is less than half the usually prescribed dose of Anaprox, a prescription counterpart.

•Munchkin, Inc., said of one of its products: "Baby bottles like Tri-Flow have been clinically shown to reduce colic." But look behind the "clinically proven" claim and you find the test was of a competitor's similar bottle, not Munchkin's.

•Tropicana claimed in TV ads that drinking two to three glasses a day of its "Healthy Heart" orange juice could reduce the risk of heart disease and stroke. The Federal Trade Commission said those claims weren't supported by scientific evidence, and prohibited the company from repeating the claims in future ads.

Deceptive product promotion is a minor problem compared with political spin. Compare claims for snake oil and emu oil with those routinely made about crude oil—petroleum. In the 2004 presidential campaign, both John Kerry and President George W. Bush spoke to voters of making America "energy independent." Toward the end of the campaign, Professor Robert Mabro, who was then the director of the Oxford Institute for Energy Studies, told The New Yorker magazine: "The two candidates, with due respect, are lying to the people, or they don't know what they are talking about."

Our guess is that Bush and Kerry knew exactly what they were talking about. Actually achieving "energy independence" would require huge changes that neither man cared to propose. One independent study, by the Rocky Mountain Institute, projected that the United States could eliminate the need to import any oil from abroad by 2040, if we took such measures as a heavy tax on gas-guzzling vehicles, a federal program to buy and scrap old gas-gulping clunkers, and generous subsidies from taxpayers to help low-income persons buy more fuel-efficient autos. The projected cost of such measures was $180 billion, at least $150 billion more than either Kerry or Bush had pledged, and even so it is probably far too little. Others say that what's required for independence is a government program on the scale of the project that produced the Apollo moon landings.

Sure enough, oil imports continued to rise after Bush was sworn in for a second term, so much that in 2005 the United States imported 59.8 percent of the oil it consumed, up from 58.4 percent in 2004. The increase came despite enactment of a Bush-backed energy bill, which was predicted only to slow the growth of imports modestly, not to reverse it.

The crude-oil spin continues. In his 2006 State of the Union address, the president said the United States was "addicted to oil." But this time he set a more modest goal: cutting imports from Middle Eastern countries by 75 percent. That was less deceptive than speaking of "independence," but deceptive nonetheless. Only about one barrel of imported oil in every five was coming from the Middle East, so cutting that by 75 percent sounded like a bigger step than it really was. The biggest suppliers to the United States actually were Canada and Mexico.

In his speech to Congress, Bush proposed a mere 22 percent increase in government spending for clean-energy research, called "shockingly small" by Severin Borenstein, an energy economist at the University of California–Berkeley. This expert added that Bush's plan was "hardly the Manhattan Project equivalent on energy that we need."

It comes as no surprise that candidates want to avoid discussing politically painful solutions during an election year, or ever. But there's real harm in pretending that there are easy solutions to big problems, or that the problems don't exist. Accepting the spin means letting the problems fester; meanwhile, the solutions become even more painful, or the problems overwhelm us entirely.

The Profits of Disinformation

Deception is highly profitable. Consider the case of one California huckster calling himself "Dr." Alex Guerrero. He appeared on TV infomercials claiming that his "natural" herbal remedy Supreme Greens (containing grapefruit pectin) could cure or prevent cancer, arthritis, osteoporosis, fibromyalgia, heart disease, diabetes, heartburn, fatigue, or even "the everyday ravages of aging," all while promoting weight loss of up to four pounds per week and up to eighty pounds in eight months. A one-month supply cost $49.99, plus shipping and handling. And as incredible as "Dr." Guerrero's claims might seem, he sold enough Supreme Greens to drive around in a Cadillac Escalade. When the Federal Trade Commission hauled him into court he agreed to settle the case by halting his claims and either paying a $65,000 fine or giving the government title to his flashy SUV. And he was just one small-timer in the FTC's bulging case files.

According to the FTC, "consumers may be spending billions of dollars a year on unproven, fraudulently marketed, often useless health-related products, devices and treatments." Worthless weight-loss products alone have proliferated so wildly that in 2004 the FTC launched "Operation Big Fat Lie" to target them. As of October 2005, the commission said it had secured court orders requiring more than $188 million in consumer redress judgments against defendants. And since the FTC relies mostly on negotiated settlements, which are like plea bargains, that $188 million is most likely a fraction of the actual ill-gotten gains from weight-loss scams. 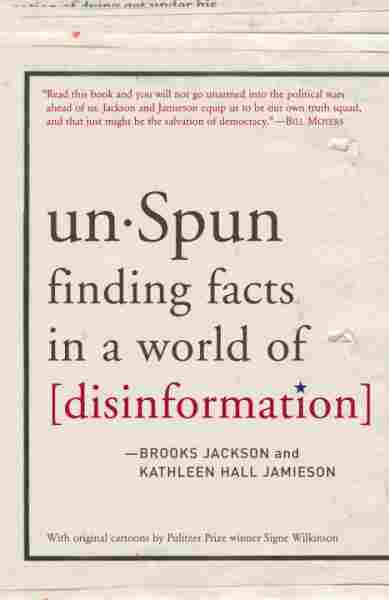 Finding Facts in a World of Disinformation