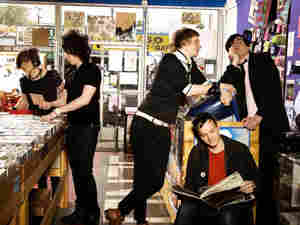 "I'm in love with the girl in my comic shop," Art Brut frontman Eddie Argos sings in "DC Comics and Chocolate Milkshake." "She's a girl who reads comics — she probably gets it a lot!" The lines demand to be heard in Argos' over-the-top, Brit-accented yelp, but even on paper they're representative: Like so many Argos characters, and maybe Argos himself, the working-class narrator sounds excitable, earnest and awkward around girls.

Throughout Art Brut vs. Satan, the English garage-pop band's third album, Argos dispenses thick details and self-conscious jokes about love, adulthood and rock 'n' roll itself. Outfitted with a turbo-charged bar-band stomp, "DC Comics" is spry in the same way as most songs on the album, and it possesses one of the most memorable shout-along choruses in the Argos arsenal. Though other tunes have funnier lines — like "Mysterious Bruises," a woozy drunkalogue wherein Argos reports on the stupid things he did last night, with a refrain that goes, "I fought the floor and the floor won" — "DC Comics" is pretty endearing.

The character here isn't necessarily Argos, but seems similar. He ticks off his troubles — he's worked since he was 10 but has no money, he can't get a credit card, he gets accused of Peter Pan Syndrome — but remains wildly enthusiastic about comic books and milkshakes. He may be an average bloke, but he's a sympathetic bloke: someone who kvetches lightheartedly and sounds like he'd be a committed boyfriend, despite youthful inclinations. As he puts it, "I guess I'm just developing late."