Accessibility links
With The 'Gay Tax,' Love Doesn't Come Cheap In commentator Nancy Goldstein's household, the cost of love isn't an abstract concept: It's precisely $1,820 per year. She has the 1996 Defense of Marriage Act to thank for that. 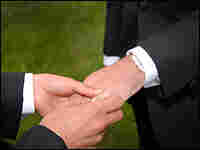 Same-sex marriage is only the first step in a long and complicated road to equality. iStockphoto.com hide caption 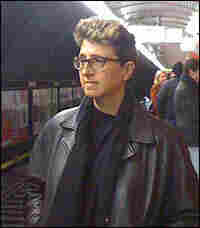 Nancy Goldstein is a writer and communications consultant who lives in New York. She blogs regularly for Salon's Broadsheet and is the co-editor of The Gender Politics of HIV/AIDS. Emily Winkelstein hide caption

The cost of love isn't an abstract concept in my household: It's precisely $1,820 per year. That's the "gay tax" we shell out for me to be on my wife's health insurance plan, because her company must treat that benefit as additional taxable income.

The media's primary focus on the morality debate around same-sex marriage means that most of the public, gay or straight, knows little about the very real economic costs of inequality. It doesn't matter that Joan and I married in Massachusetts five years ago this week, or that our home state recognizes our marriage. It makes no difference that she works for a progressive company with an active LGBT employees group. Companies pay for their employees' health insurance with pretax money through a federal program, and same-sex marriage isn't federally recognized.

We have the 1996 Defense of Marriage Act to thank for that. DOMA defines marriage as being the legal union of a man and a woman. On that basis, the federal government denies to legally married same-sex couples the 1,138 federal protections and benefits it extends to all other married couples. So I'm not surprised that a March 2009 report from UCLA found that same-sex partners are more likely to be poor than our heterosexual counterparts — in large part because of our lack of access to supposedly universal safety nets, such as a spouse's health insurance coverage and Social Security survivor benefits.

Consider the cost to Randy Lewis-Kendall, who lost his husband, Rob, to colon cancer in 2007, their 30th year together. He is about to be denied the $1,161 per month he would have collected in Social Security survivor benefits had his marriage been federally recognized. He could use it, too. The two men owned a small gift shop in Harwich on Cape Cod together, and Randy has been struggling to pay the bills since Rob's death and the economic downturn.

That price my wife and I pay for the depraved thrill of being two middle-aged women with a joint checking account? It's a drop in the bucket compared with what love is costing Melba Abreu and Beatrice Hernandez. They've been together for 32 years and have paid nearly $20,000 more in taxes since their 2004 marriage than if they had been able to file a joint federal return.

DOMA doesn't just hurt our pride: It undermines our ability to take care of one another. Neither Joan nor I have the right to take family medical leave from our jobs in the event that one of us becomes seriously ill. In couples where one spouse is a U.S. citizen and the other is not, the citizen cannot obtain a visa for the noncitizen or sponsor him or her for citizenship. And forget about inheritance. If you're in a same-sex marriage and your spouse leaves her estate to you — for example, the house you shared — you'll be forced to pony up as much as 50 percent of her estate's value in taxes. Price tag for federally recognized married couples? Zero.

The good news is that Gay and Lesbian Advocates and Defenders, which successfully fought for marriage equality in Massachusetts, filed a suit challenging DOMA in Boston's Federal District Court this past March. Plaintiffs include the aforementioned couples and six others, among them Dean Hara, the widower of U.S. Rep. Gerry Studds. The bad news is that we're looking at a long, slow march to the U.S. Supreme Court. And our current administration and Congress are full of officials who are quick to pay lip service to the concept of equality but won't lift a finger to change the law.

That's a shame, because DOMA is aging badly: Five states have legalized same-sex marriage since 1996 and still more are on the verge of doing so, while public support for marriage equality is growing. The government's insistence on charging same-sex married couples exorbitant fees for basic rights makes it look less like a defender of marriage than a loan shark.