Accessibility links
Surrounded By Plastic, NICU Infants Tested For Risk For decades, people have been alarmed about possible effects on humans — particularly developing embryos and new babies — from plastic additives called phthalates. One doctor is studying a group of infants exposed to high levels of phthalates from the medical tubing in the hospital's neonatal intensive care unit. 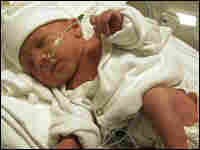 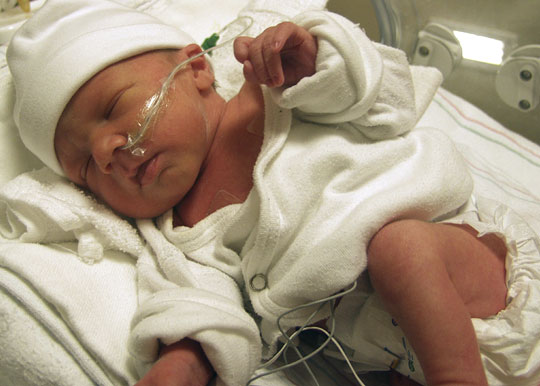 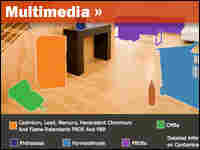 Click to see how different regions regulate chemicals in plastics.

Critically ill newborns may help researchers figure out whether children are at risk from plastic additives called phthalates.

Scientists say the nation's sickest newborns are exposed to unusually high levels of phthalates — chemicals in plastics that can mimic hormones — because they often spend days or weeks connected to feeding tubes, breathing tubes and intravenous lines made of plastic. And the exposure comes at a critical time in human development.

One doctor conducted a follow-up study by testing patients years after they were exposed to phthalates as infants in the neonatal intensive care unit.

"If anybody is going to have problems, this would be the population to look at," says Dr. Billie Short, medical director of the neonatal intensive care unit at Children's National Medical Center in Washington, D.C.

Of the patients — now teenagers — whom she was able to track down, Short says tests showed they had normal sexual development. But the study population was too small to draw any firm conclusions, she says.

Because they can act like hormones in the body, phthalates have generated a great deal of debate about whether low doses might affect a child's development.

Short says she began studying infants in her ICU years ago when she realized they were being exposed to a phthalate called DEHP. Eliminating DEHP wasn't an option because without the plasticizer, the tubes that keep many of her patients alive would be too brittle to use.

"This tubing has plasticizer in it," she says, reaching for a dangling plastic IV line next to a bassinet containing a tiny newborn in her ICU.

Studies of lab animals show that high doses of phthalates can cause abnormal sexual development and reproductive problems. There's no good evidence that phthalates are causing similar problems in people.

But Short wondered whether the chemicals might pose a special risk to infants who spend days or weeks on extracorporeal membrane oxygenation (ECMO), a heart-lung machine for newborns who can't breathe on their own.

"This bag is one of the culprits," she says, pointing to a clear plastic bag connected to yards of plastic tubing and the ECMO machine.

Both the bag and the tubing contain phthalates. And they form a circuit that an infant's entire volume of blood will pass through again and again.

High Exposure In A Critical Time

Short thought phthalates were leaching out of the plastic and into kids' bodies. Tests showed she was right.

Phthalate levels in kids on ECMO can be more than 100 times the levels found in healthy adults.

Short knew that lab animals exposed to phthalates just after birth were especially prone to abnormal sexual development. And she thought infants exposed during the same period might also be vulnerable.

So Short and a team of researchers tracked down a small group of teenagers who had been on ECMO as infants.

But Short says that study was too small to be conclusive. So she has been trying to get funding for a larger study.

In the meantime, Children's National Medical Center and many other hospitals are switching to feeding tubes made without phthalates, and IV lines coated with a substance that keeps phthalates from leaching out.

The ECMO study was a good first step, says Russ Hauser, a professor of environmental epidemiology at Harvard School of Public Health. But to detect anything but the most dramatic abnormalities, he says, "you would need a much larger population."

Hauser has spent the past three years trying to figure out how to do that sort of study.

The easy part, he says, has been deciding what to look for. They are the same problems that show up in animal studies: lowered fertility and abnormal development of the reproductive organs.

The hard part has been designing a study that will provide definitive results, Hauser says.

One problem is time, he says. Ideally, the study would follow kids from birth until puberty or even later.

He says another problem is that just about all kids in an ICU are exposed to phthalates. So how do you find a comparison group that spent time in an ICU but wasn't exposed?

And then there's the fact that even in ICU babies, phthalate levels aren't so high that they would be likely to produce dramatic abnormalities, Hauser says.

"To put it in perspective," he says, "they would probably be about 1,000 to 10,000 times lower than levels used in experimental studies in rats."

So any effect on ICU babies is likely to be subtle — a slight delay in puberty, or fertility problems later in life.

Hauser says the effect of phthalates on other kids — if there is any — would be even less obvious.