Accessibility links
Author Shares Recipe For Cooking Shows' Popularity In a new book, Watching What We Eat, author Kathleen Collins offers a history of cooking shows, from radio's "Aunt Sammy," who offered tips to housewives in 1926, to today's Food Network. 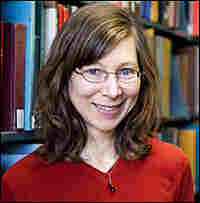 In Watching What We Eat, author Kathleen Collins examines how cooking shows have both reflected and shaped significant changes in American culture. Courtesy of Continuum Books hide caption 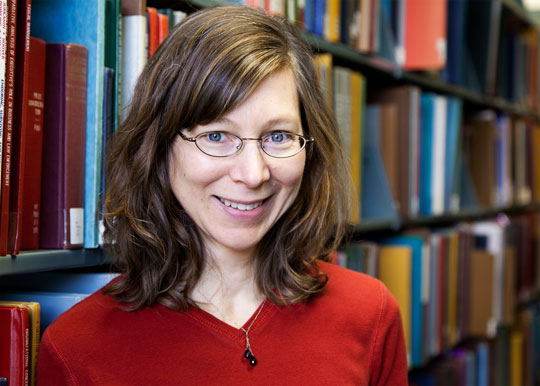 In Watching What We Eat, author Kathleen Collins examines how cooking shows have both reflected and shaped significant changes in American culture.

Food is one of television's most enduring stars, from the days of black-and-white TV when prim homemakers whipped up casseroles and cream pies to today's round-the-clock Food Network.

Author Kathleen Collins offers a history of television cooking shows in a new book, Watching What We Eat.

She tells NPR's Renee Montagne that the seeds for the TV shows came from radio, beginning in 1926 with "Housekeeper's Chat" on the Farm Radio Service. The show featured "Aunt Sammy," a fictitious character created by the Department of Agriculture, who shared household tips for housewives.

"They would have different actresses playing Aunt Sammy, and she would adopt different regional accents to fit the area that she was broadcasting to," Collins says. "And, while it was not ever made terribly explicit, she was supposed to be the wife of Uncle Sam."

The first nationally televised cooking show starred James Beard, but most people didn't get to see him because not many people had televisions in their homes, Collins explains. At that time, most televisions were in public places such as taverns and saloons.

"Men used to gather in these bars on Friday nights to watch the boxing matches and they were the first audience for television cooking shows," she says.

But what ties those first shows to the popularity of cooking shows today, Collins says, is that they speak "to so many different parts of us. It's soothing, it's sensual, it somehow speaks to everybody a little bit."

Excerpt: 'Watching What We Eat' 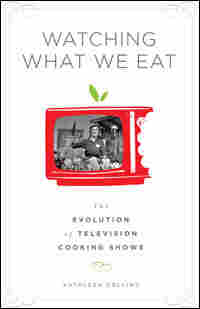 The 1960s had Julia Child as its emblematic television cook, and the early 1970s had Graham Kerr. "The Galloping Gourmet" was the first cooking show to aggressively capitalize on the entertainment potential of the medium and to come at the genre from this angle.

It would be easy to say that Kerr leapt on Childs' coattails. After all, "The Galloping Gourmet" appeared on U.S. television in 1969, six years after "The French Chef." But it would be glib and plain wrong to say so. Not only had Graham Kerr been cooking since he was a wee one in the English hotel kitchens owned by his parents compared to Julia who began at a doddering 36, but his first televised cooking demo aired back in 1960 in New Zealand ("That doesn't count," Child teased him). True enough, Child was a pioneer in the United States and unquestionably deserves her iconic status as queen of small screen cuisine, but Kerr set a few firsts himself.

Viewers in the U.S. had been well prepped, of course, by "The French Chef," but the style of "The Galloping Gourmet" was a world apart. The show opened with the snappily-dressed, British dandy of a ball of energy leaping over a tall kitchen chair while holding a full glass of wine, setting the tone for the rest of the episode and raising the bar for almost every cooking show that followed.

Where Child's studio was quiet except for the splat of, say, a sole filet hitting a hot skillet, cracking of chicken bones or her pleasant chirruping, Kerr's set was home to the first in-studio audience for a syndicated cooking program and the first to have a "hidden camera" trained on the audience. "We could go into the people's faces as they were licking their lips and going 'mmmm'," says Kerr's producer-wife Treena. No minor convention that - consider where Emeril would be without his conditioned oohing-and-aahing audience.

As home cooks on the whole became more self-possessed in their kitchens and dining rooms, cooking shows were ostensibly relieved of some of the burden of actual teaching. Kerr heeded the how-to format to a good degree, demonstrating cooking techniques with recipes for dishes like Shoulder of Lamb Wellington, Veiled Country Lass (Danish applesauce cake), spaghetti con salsa di vognole and Hot Cracker Crab, but unlike his predecessors, teaching was not the primary rationale. Graham - or more accurately, Treena - thought of his major occupation as comedian.

"'The Galloping Gourmet' is a new phenomenon on TV," wrote Margaret Ness in the Christian Science Monitor in 1969, "a cooking entertainer." Imagine - there was a time not so long ago when cooking shows were neither mandated nor expected to amuse. Variety shows, like cooking shows, were older than the medium of TV itself. Injected with 1970s inventiveness and irreverence, the form continued to hold our attention for the entire decade from "Laugh-In" and "Carol Burnett" to "Sonny and Cher," "Donny and Marie" and the indelible "Saturday Night Live." Rather than a drama and plot to keep us glued to the set, the variety show was a mindless, indulgent entertainment format cut into small, bite-size chunks that hooked us. It was ideal for boomers trying to combat any sobriety - just as it had always intended - brought on by hostages, terrorism or stagflation. Kerr's spectacle fit this model, too. Each moment held the chance for the unexpected, and whatever ensued would dependably be good for a laugh.

According to his family, Kerr was not the drinker his dipsomaniacal shtick implied. (To wit, "I think I'll have a short slurp whilst doing this...") But his intimate contact with the famous glass of wine made him an ipso facto authority on the grape. Along with an interest in exotic foods, Americans were becoming more curious about wines as part of the package. (To conjure up the conventional wine culture du jour, recall the TV ad "Riunite on ice - so nice.") Kerr would occasionally talk about some of the wines that he drank on the show. "I'd say, 'This is young and fresh and somewhat acidic,'" Kerr says, self-mockingly. "People would talk about the oaky, fruity, butterscotch hint of raspberry because they'd heard other people do it." Personal manager Harry Miller has said he believes Kerr was the first person on earth to talk about pairing particular wines with food. A hyperbolic comment - certainly oenophile Thomas Jefferson must have paid this some notice - but it may well be true that Kerr was the first person widely heard or seen spouting such stuff. People who never had a glass of wine in their lives, Kerr says, credited him with their embrace of the basic tenet of red wine with meat and white wine with fish. In today's uber-sophisticated food culture that rule sounds so elementary (and in some cases faulty), but one has to start somewhere.

"Inevitably you get someone who does something unique," says Kerr obliquely and ever-humbly referring to "The Galloping Gourmet" as such a maverick. "In order to get noticed and come up through the pack, like Emeril did, you have to somehow have something, a slant, or a word or two, a defined persona in order to make it within the genre. It's like Liberace with his clothes and the candelabra."

Emeril Lagasse's "Bam!" and madcap habit of adding umpteen extra garlic cloves as an afterthought are well known among Food Network devotees and perhaps anyone with functional ears and eyes. In the days before TV hit the viewing audience repeatedly with blunt, high-concept ideas, Kerr's trademark was simply his comedic persona. Whereas Julia won untold numbers of fans despite, as her biographer writes, her being "'all wrong' for television," Kerr was endowed with a made-for-TV personality. The show's title presumably referred to his recipe-hunting visits to various countries shown in taped segments (another convention now taken for granted). But it's fair to say he also galloped about the studio kitchen, flirting, hamming and performing a veritable slapstick routine. In a half hour show, he'd take off his suit jacket to cook and gallop then replace it when the time came to dine by candlelight and classical music. He once cooked in a suit of armor and another time in boxer shorts and swim flippers.

Kerr often addressed the audience as a single companion referring to her as "darling" and "sweetheart." Compared in physicality to both Dick Van Dyke and Gary Cooper, Kerr was both goofy and handsome. Traditionally manly and virile, he was not. This, however, did not detract from his attractiveness, as scores of blushing female fans have suggested. I recall having a bit of a secret May-December crush on him myself (TV is a powerful beast, especially when sitting mere inches from its electrically crackling screen). In fact, his metrosexuality - a term yet to be coined but fully embodied in his being - was an essential part of his charm. As Joan Bowling from Santa Monica, California wrote to the Los Angeles Times in 1969, "This program is a delight. Graham Kerr is witty, gay, light as one of his own soufflés and a trifle bawdy."

In a disapproving review of "The Galloping Gourmet" longtime New York Times television critic Jack Gould wrote: "Whether his recipes are delectable defies electronic analysis..." Excellent point, Mr. Gould, and one that is often ignored in discussing cooking shows since there's nothing we can do but believe Kerr and Child when they seem pleased with what they taste test along the way. We can't ourselves judge anything we see prepared on TV and for all we know, the marvelous-looking dishes could taste like library paste. But of course that fact is of little consequence. We imbue our hosts with trustworthiness and rely on visual cues to project delectability. And when a host is handsome and charming, one might be less likely to find fault with the fact that the time for cooking the rice was omitted or that he used directions like "slosh some liquid into the mixture" in place of actual measurements. Part of the cachet of cooking - then and now - is knowing or pretending to know how to use your intuition and not having to always bother with silly old garden-variety measurements like "cup" or "tablespoon." A "glurg" or a "ching" ought to get the point across, no? And besides, who is really watching with pen and paper in hand? Like a soufflé Kerr was irresistible, and those clamoring to criticize his lack of formality or jot down specific recipes were unfortunately missing the point. 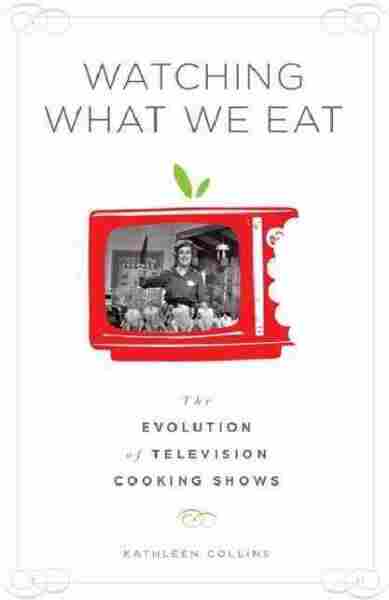 Watching What We Eat

The Evolution of Television Cooking Shows