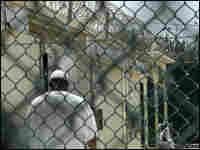 In this 2008 image reviewed by the U.S. military, a detainee is visible through fencing around a cell block at the U.S. naval base in Guantanamo Bay, Cuba. Randall Mikkelsen/Getty Images hide caption 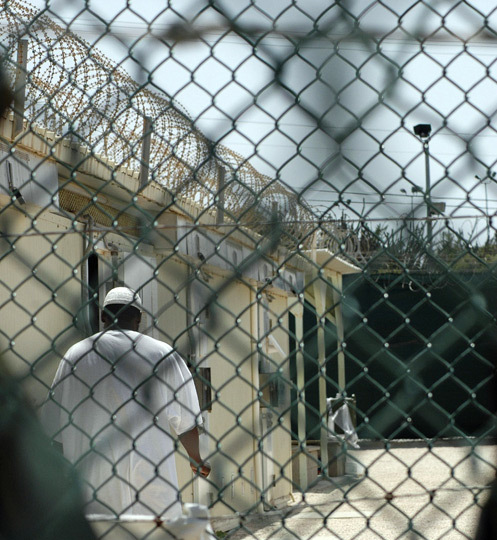 In this 2008 image reviewed by the U.S. military, a detainee is visible through fencing around a cell block at the U.S. naval base in Guantanamo Bay, Cuba.

The White House announced Friday that it is reviving Bush-era military tribunals to prosecute about 13 of the roughly 240 detainees remaining at the U.S. detention facility at Guantanamo Bay, Cuba.

But the tribunals will include new legal protections for terror suspects, President Obama said in a three-paragraph statement. "This is the best way to protect our country, while upholding our deeply held values," he said.

The new tribunals will apply only to about 13 of the detainees whose cases are under way. Several suspects in the Sept. 11, 2001, terror attacks could be among them, including Khaled Sheik Mohammed, who is accused of planning the attacks. Proceedings are expected to resume by the fall to allow time for the new rules to be put in place.

A System Plagued With Problems

The tribunals have been plagued with problems since they were introduced at Guantanamo Bay five years ago.

Some human rights activists and legal scholars say it is unclear whether those problems will disappear now that the tribunals are being brought back.

When Obama announced earlier this year that the Guantanamo detention camp would close by January 2010, he also froze the trials of detainees while the new administration reviewed the legal proceedings.

The tribunals — known as military commissions — were drawn up solely to prosecute Guantanamo prisoners and have been the target of lawsuits claming that detainees have been denied legal rights and should instead be tried in federal courts.

Reviving the tribunals for just a few of the cases does not resolve the question of what to do with other Guantanamo detainees. Administration officials say they could be transferred to another country or tried in federal court. Some could be held indefinitely.

Changing The Rules Of Allowable Evidence

Among the new rules: restrictions on hearsay evidence; any evidence collected through torture or abuse will be banned; detainees can change their military lawyers; and detainees won't be sanctioned if they refuse to testify.

The tribunal system was created after U.S. forces began capturing and detaining suspects in Afghanistan following the Sept. 11 terror attacks. The White House said Friday it will seek further rule changes in the next few months as it asks Congress to change the 2006 law that gave detainees additional rights under the tribunals.

It is unclear where the new commissions will be held. There are facilities already in place at Guantanamo Bay, but it's unlikely that the new tribunals will be completed by the time the prison camp is due to close in January.