Accessibility links
Where The Flute Meets The Beat Box When flutist Greg Pattillo moved to New York and began busking at subway stations, he went traditional. But when the cash didn't come in, he decided to experiment. Pattillo came up with a style of playing he describes as "beat-boxing flute." 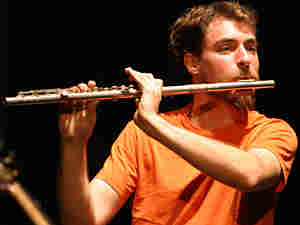 When flutist Greg Pattillo moved to New York and began busking at subway stations, he went a traditional route.

"I couldn't find work playing music anywhere," he says. "And so the logical conclusion was to take my music into the subway, which is a tough audience because in the subway everyone's there to go somewhere else and not there to hear you."

He would play for an hour, he says, and make only a dollar in change. So he decided to experiment.

He tried out a style of playing described as "beat-boxing flute" or "rhythm flute," that incorporates hip-hop beats made with his mouth.

"As I was packing up, I would do a little beat-boxing with, say a video game tune, and voila, 10 bucks in the case," he says. "So I started to put two and two together, and realized that people like 'beat-box flute.'"

And he soon discovered this style was a big money-maker.

Pattillo says that a lot of the standard flute techniques are also used in beat-boxing.

"We use our tongue to clarify the notes that we play," he explains. "And if you overpronounce them and pop some P's, you get some beat-box rhythm. Beat-boxing, I think you can safely define it as making beats with your voice and your mouth."

Pattillo says he uses mnemonic devices — such as the words "boots" and "cats" — to teach beats and create certain sounds, specifically emphasizing and popping the consonances to make the sounds carry beyond the mouth.

To hear the full interview, click on the audio link above.