Accessibility links
The God Chemical: Brain Chemistry And Mysticism In a study at Johns Hopkins, a majority of test subjects given a psychedelic drug reported having full-blown mystical experiences. Such research is shedding light on the chemical reactions that take place in the brain when people feel they're encountering God. 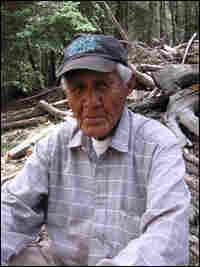 Fred Harvey, an 87-year-old roadman, or high priest, on the Navajo reservation at Lukachukai, Ariz., led a peyote ceremony. Using peyote, a cactus that induces visions when ingested, has been central to the Navajo religion for hundreds of years. Barbara Bradley Hagerty/NPR hide caption 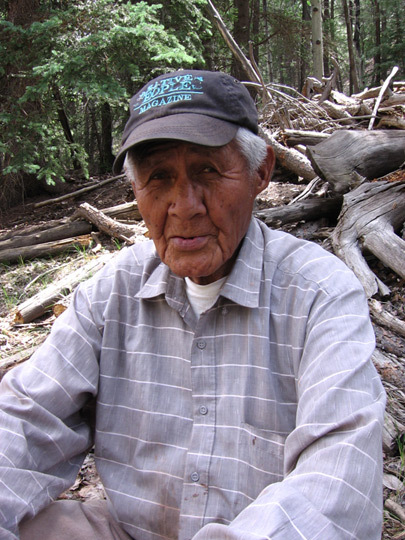 Fred Harvey, an 87-year-old roadman, or high priest, on the Navajo reservation at Lukachukai, Ariz., led a peyote ceremony. Using peyote, a cactus that induces visions when ingested, has been central to the Navajo religion for hundreds of years. 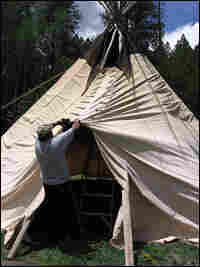 Organizers set up a teepee for the peyote ceremony, which lasted 11 hours. Mika Halpern hide caption 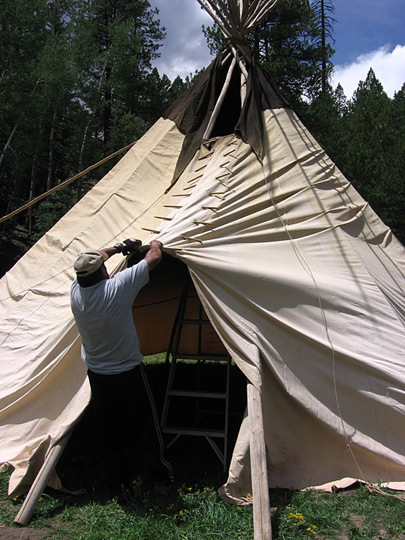 Organizers set up a teepee for the peyote ceremony, which lasted 11 hours.

For much of the 20th century, mainstream science shied away from studying spirituality.

Sigmund Freud declared God to be a delusion, and others maintained that God, if there is such a thing, is beyond the tools of science to measure.

But now, some researchers are using new technologies to try to understand spiritual experience. They're peering into our brains and studying our bodies to look for circumstantial evidence of a spiritual world. The search is in its infancy, and scientists doubt they will ever be able to prove — or disprove — the existence of God.

I spent a year exploring the emerging science of spirituality for my book, Fingerprints of God. One of the questions raised by my reporting: Is an encounter with God merely a chemical reaction?

The search for that answer led me to my first peyote ceremony, on a mountaintop on the Navajo reservation at Lukachukai, Ariz.

While Fred Harvey, an 87-year-old roadman, or high priest, warmed up his voice, members of his family prepared the peyote, a cactus that induces visions when ingested. Using peyote to touch the spiritual world has been central to the Navajo religion for hundreds of years.

Andy Harvey, a ceremony participant, said peyote serves as a mediator between the human world and the divine.

"Sometimes we ask the peyote to help us cleanse the illnesses away and cleanse our mental being, our spiritual being," he said. "And we believe that's what peyote does, too. That's why we call it a sacrament, a sacred herb."

At 9 p.m., 32 of us crawled into the teepee; for the next 11 hours, the young men drummed, the roadman prayed, and everyone but me ingested a lot of peyote. Sometime around midnight, the subject of the ceremony — a Navajo woman named Mary Ann — spoke up.

"I want to confess to the fire," she said.

She said she had suffered from shingles for the past two months, and she needed the peyote to heal her. She said she believed she had harmed a man some 20 years earlier, and his spirit had been plaguing her ever since.

"I need him to forgive me," she cried. "I know I'm in pain because he hasn't forgiven me."

Two more hours had passed when Mary Ann suddenly cried, "The shingles are gone! The peyote has healed me!"

After the ceremony, Mary Ann said she was, in her words, "too peyoted up" to talk. I called her on the phone two months later. She said while in the teepee, she saw the spirit of the man she had harmed and asked him for forgiveness.

"He came in front of me, and he just left me," she said. "And that's when my pain stopped. He forgave me."

Perhaps. Or perhaps the trinity of prayer, drumming and drug relieved her stress — and her shingles.

Lessons From The '60s

Scientists have long been intrigued by mystical experiences like Mary Ann's. A person prays and gets better. A car crash victim feels himself floating above his body. For years, scientists have wondered why these things occur — or even if they're real. So they're taking drugs like peyote out of the teepee and into the laboratory to find out more.

The first major rigorous study of psychedelics and spirituality occurred on Good Friday in 1962. In the basement of Marsh Chapel at Boston University, researchers from Harvard gave 10 divinity students LSD to see if the sacred setting, combined with drugs, would spark a mystical experience. It did. Soon afterward, researchers at other prominent universities began administering psychedelic drugs to volunteers in controlled settings.

By the end of the 1960s, the U.S. government had had enough of Timothy Leary's call to "turn on, tune in, drop out" and were concerned that a generation was conducting its own uncontrolled experiments with drugs and spirituality. In the early '70s, the experiments ended.

A couple of months after the peyote ceremony, I follow Roland Griffiths into his mushroom mecca in the middle of Johns Hopkins University Medical Center in Baltimore.

The lighting is low, the carpeting plush. There's a cross on the wall, a statue of Buddha, a Shinto shrine. In the middle of the room is a sofa where volunteers can lie down after they've ingested a capsule of psilocybin, the psychedelic ingredient in mushrooms. Griffiths, a neuropharmacologist, is the lead investigator in the first major study of drugs and spirituality since the 1970s. Why, I ask, would he launch such controversial research?

Finding The Mystical In A Mushroom Trip

Actually, Griffiths says that when he took up meditation 15 years ago, he began thinking differently about the nature of reality. He wondered: What if he could study what happens to the brain when people enjoy spiritual experiences? Griffiths recruited 36 people. They were all middle-aged and stable, had an active spiritual practice — whether Christian, Jewish or other — and were willing to take the trip of their lives. Among them was 56-year-old Karin Sokel.

"They asked me to lay down with headphones and the most powerful music I've ever heard," Sokel recalls. "I was blindfolded, and I began to have my experience."

Sokel was involved in five sessions, and she describes them as the most profound experiences of her life.

"I know that I had a merging with what I call oneness, I am," she says. "There was a time that I was being gently pulled into it, and I saw it as light. ... It isn't even describable. It's not just light; it's love."

Sokel's words echo those of mystics through the ages, who talked of a physical union with God, a peek into eternity or an out-of-body experience. Griffiths says 70 percent of the subjects had full-blown mystical experiences, which Griffiths calls "remarkable."

Serotonin And The Mechanism Of Mysticism

"If we assume that the psychedelic, drug-induced state is very much like the mystical state," Snyder says, "then if we find out the molecular mechanism of the action of the drug, then you could say that we have some insight into what's going on in the brains of mystics."

Snyder, who is chairman of the neuroscience department at Johns Hopkins and was not involved in the study, says scientists suspect that a key player in mystical experience is the serotonin system. The neurotransmitter serotonin affects the parts of the brain that relate to emotions and perceptions. Chemically, peyote, LSD and other psychedelics look a lot like serotonin, and they activate the same receptor.

Think of that serotonin receptor as a bouncer at a nightclub. The party's a bit tame, and when the bouncer spots the fun chemical — the active ingredient in psilocybin — he lets Mr. Fun into the club. Suddenly, the party picks up and the brain chemicals are burning up the floor.

New Avenues To Study Spirituality In The Brain

Of course, it's more complicated than that. There are other chemicals and receptors at play, and, of course, mystical experience happens without drugs — through prayer, meditation, chanting and fasting.

But Griffiths says this study will open new vistas into the science of spirituality. Until now, he says, we couldn't systematically study mystical states.

"You can't just say, 'Well, come into the laboratory and pray for two hours, and then we're going to image your brain because we know you'll have a mystical experience then!' " he says. "We're talking about rates of experience that may occur once in a lifetime or once every year or two."

But if you can chemically induce the equivalent of a spiritual experience, he says, you can slide a person into a brain scanner and observe which parts of the brain light up and what neural networks are used.

LSD And Life After Death

Griffiths has now launched other studies that pick up work begun a half-century ago.

In the 1950s and '60s, researchers studied the effect of LSD trips on patients with end-stage cancer. Many of those who enjoyed mystical experiences, researchers found, returned from their trips believing that life continues after death, and with reduced pain — or at least a different perspective on pain. Griffiths is now recruiting patients to test whether a synthetic spiritual experience might aid them in any way.

Still, Griffiths says all the studies in the world can't answer his central question about spirituality: "Why does that occur? Why has the human organism been engineered, if you will, for this experience?"

It's a question that haunts other scientists, as well. They want to know: Is there a sweet spot for spirituality in the brain?

Part 2 of this series looks at the search for the God spot.