Accessibility links
A Brain Drain In Reverse, Back To India Amid the global recession, the Indian economy is still relatively strong, and many Indians living in the United States have decided to head home — for better jobs and lifestyles. 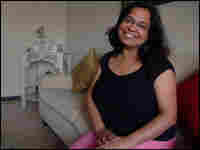 Kitty Singh is among those making the reverse migration. She and her family moved from California back to India. She worries that her children, raised in the U.S., will get too used to having maids in India. She tells them, "You're American. I don't care if your friends' maids pick up their stuff. That's not how I'm raising my children." Courtesy of Bishan Samaddar hide caption 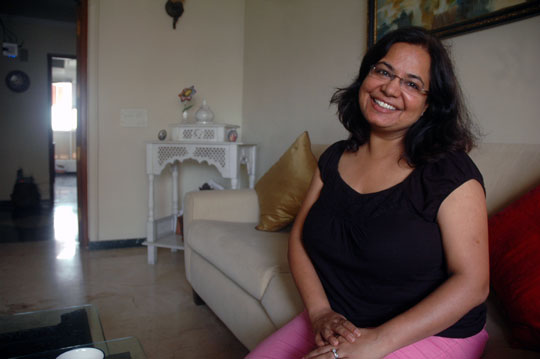 Kitty Singh is among those making the reverse migration. She and her family moved from California back to India. She worries that her children, raised in the U.S., will get too used to having maids in India. She tells them, "You're American. I don't care if your friends' maids pick up their stuff. That's not how I'm raising my children." 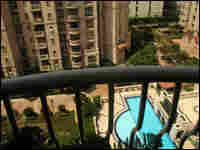 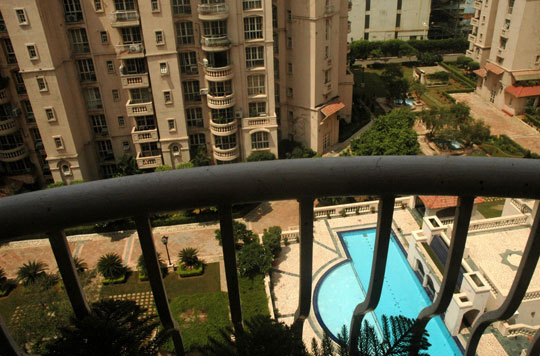 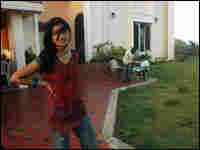 Deepa Venkatesh moved from San Diego with her husband and three young boys to Chennai, overlooking the Bay of Bengal. Courtesy of Bishan Samaddar hide caption 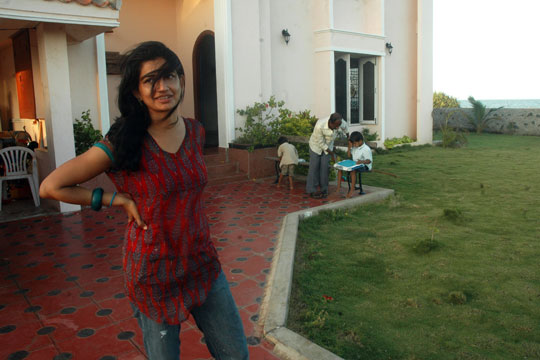 Deepa Venkatesh moved from San Diego with her husband and three young boys to Chennai, overlooking the Bay of Bengal.

For decades, the allure of the United States and its robust economy drew Indians looking for better jobs and better lives. Now, that brain-drain trend may be in reverse. Amid the global recession, the Indian economy is still relatively strong, and many Indians living in the United States miss the cultural experiences of India.

It's the hottest topic at potluck dinners all over Silicon Valley — which friend or colleague has decided to R-2-I, or return to India. Many young immigrants are deciding that the economic opportunities are better back home.

A survey of recent returnees to India found that the typical returnees are in their 30s, married, with a master's degree or Ph.D.

There's always been a fantasy about going back. We call it the X+1 syndrome: I'll go back to India after X years in America. Except that X keeps changing: Let's work a couple of years; how about that green card? But it seems that if ever there were a time to go home again, it's now.

Dreams Of Returning To India

Web sites offer advice on everything from who's hiring in Bangalore to how much gold you can bring home. When I ask Indians why they are heading back, they'll usually give the same answer.

"I am looking forward to spending a lot more time with my parents," says Vikram Dasu, who moved back to India after 12 years in the U.S. But it's more than his mother's cooking that pulled him back. "I am also looking forward to the new India — the opportunities it offers."

While most of the world's economies are grappling with the recession, India's GDP still grew 7 percent last year.

Manu Ittina watched India weekly for signs of the perfect time to move back. He was an animator for DreamWorks in the San Francisco area, with credits like Shrek 2 and Madagascar. "Timing was a big thing," he says. "I felt the pressure, given my age, that if I didn't do it now, I would miss out on a very huge opportunity." So Manu went back to India at the age of 25 and started his own animation studio, called Taksha, in Bangalore.

Those who go back find an India with shiny new malls, caramel macchiatos and motorized rickshaws with drivers on cell phones. They learn that American accents are no longer special in India. I met an executive who told me that in his first week back in Bangalore, a young woman told him, "At least let go of that American accent when you are not working." She thought he worked at a call center.

But in other ways, India stubbornly remains India. Kitty Singh moved from California to Gurgaon, near New Delhi. Like many returnees, she lives in a gated community, with manicured lawns, turquoise swimming pools and servants: a cook, a driver, a maid — maybe two maids.

Singh says the maids will carry down school bags for most children and even follow behind on a trip to the swimming pool with towels. "My kids will say, 'Didi can clean up my toys,' " says Singh. "But I tell them no. It's reverse of what my parents would say to me when I was a kid. 'No you can't get your hair cut; no you can't go to the mall. You are Indian.' I find myself saying things like, 'You're American. I don't care if your friends' maids pick up their stuff. That's not how I'm raising my children.' "

But Singh admits she didn't realize how much of a bubble she was living in until her brother visited from the U.S.

"Since both of us were up at 5 o'clock, we took a couple of rounds around the building. And he said, 'This is ridiculous. Why are we circling the building?' " So Singh and her brother left the confines of her apartment building. She noticed for the first time that the pavement outside her complex, early in the morning, was filled with people sleeping.

Culture Shock For Indians Used To The American Way

The culture shock is even more profound for a new generation of returnees. Well, you can't really call them returnees. Sridhar Venkatesh was born in America. His parents were part of the brain drain from India. Now, Venkatesh and his family live in a brand new five-bedroom mansion in Chennai, on a windswept beach overlooking the Bay of Bengal.

When Venkatesh set up his first big meeting with India's largest telecom company, his chief engineer told him he couldn't be there.

"He said, 'Sorry, we can't do it on Tuesday,' " Venkatesh recalls. "There was a religious function at his house in the morning. And I said, 'It's not that easy to get this meeting. We've got to do it.' He said, 'No way, my parents won't let me.' " In the end, a stunned Venkatesh ended up moving the meeting.

It shouldn't have surprised him too much. He knows India. His parents took him and his brother there every year to visit so that they didn't lose touch with their roots. I guess it worked a little too well.

"They weren't very happy we were moving back. They know their life is in San Diego. All of their immediate family is there in the U.S. My kids are the only grandkids they have. Even now when I talk to them, I will get a question, 'Oh, so how long is this? Maybe next year you are planning to come back?'"

Venkatesh and his wife, Deepa, and their three little boys are in no hurry to go back.

"We just never know where life will take us," Deepa says. "The education system here is excellent. The kids have learned so much more here, I think, than in the U.S. I look forward to them going through the system here and possibly going back there for university."

But first, Venkatesh's parents have to deal with something else. Recently their other son Mukund cleaned out his apartment in San Francisco, bought himself a one-way ticket and joined his brother in India.

New America Media editor and Morning Edition commentator Sandip Roy traveled to India on a World Affairs Journalism Fellowship administered by the International Center for Journalists. The fellowship is sponsored by the Ethics and Excellence in Journalism Foundation.