Accessibility links
Travel Industry Hopes Bargains Attract Business It has been a dismal time for the nation's travel and tourism industry, with business travel taking an especially big hit. About 200,000 tourism and travel jobs evaporated in 2008. But many in the industry say they are beginning to see signs of a rebound, sparked by travel bargains. 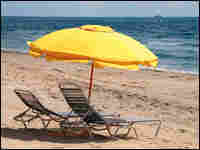 Industrywide, hotel revenues in April were down 20 percent from a year ago. iStockphoto.com hide caption 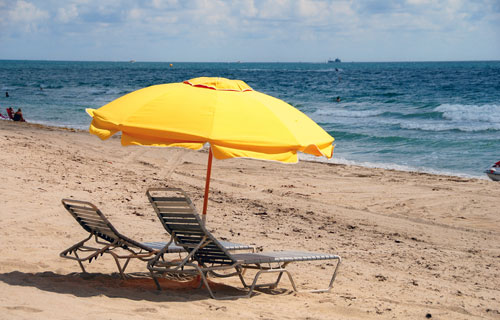 Industrywide, hotel revenues in April were down 20 percent from a year ago.

No matter how bad the economy gets, there is one industry that can never scrap its annual convention to save money. It's the travel industry.

About 200,000 tourism and travel jobs evaporated last year. But at the travel convention in Miami Beach, many industry members say they are beginning to see signs of a rebound, spurred by lower prices.

Representatives of travel companies from around the world are gathered this week to make their deals with U.S. suppliers — resorts, hotels and the like. The U.S. Travel Association estimates that deals made during this convention will generate more than $3.5 billion in travel over the next few years.

In the hall at the Miami Beach Convention Center, more than 1,000 U.S. travel companies have set up shop. One entire aisle is devoted to the InterContinental Hotels Group, a company that includes the Crowne Plaza and Holiday Inn brands.

Industrywide, hotel revenues in April were down 20 percent from last year. Jimmy Thomas, with InterContinental, says his company is doing better than that, especially in the larger markets. But in order to fill the company's hotels, room prices have dropped substantially, he says.

"In many markets, they're down to post-9/11 rates. And I'm not going to mention any markets, but some of them are even below where 9/11 was. New York has come down considerably from where it was even a year ago," Thomas says. "There's tremendous bargains out there. You just have to be able to look for them."

Surprisingly, leisure travel has remained relatively strong. Like the economy in general, it has taken a hit, but it's down just 2 percent from last year. A bigger problem for the U.S. travel industry has been the sudden and steep decline in business travel and meetings.

The industry is still feeling fallout from the news last year that American International Group Inc. sent its executives to an expensive resort for a business meeting just days after receiving an $85 billion bailout. That ignited a firestorm of media coverage and denunciations on Capitol Hill.

The head of the U.S. Travel Association, Roger Dow, says business meetings had been a $100 billion a year industry.

"There was a lot of damage done by those articles and by those stories, by elected officials, almost vilifying people for going for a meeting," he says. "And that's a shame, because that's a legitimate way that America does business. When people don't go to a trade show or a convention, they don't buy the products that the people are selling. And it has a domino effect on our economy."

Like others at the convention, Tucker Stover, travel sales manager for Sheraton's downtown Denver hotel, says business travel is still down, but bookings for meetings and conferences are beginning to pick up for 2010. One factor in the hotel's favor: Sheraton is a mid-tier brand — a safer choice for publicity-conscious executives than luxury hotels and spas.

"Well, the associations and corporations know that this is their time. It's a great time to buy because they have a lot of leveraging power. And so, as they look forward into the year, they may not be able to have the funds to host a meeting this year, but next year, they'll have a little more time to save up. And it's showing benefits for them."

Miami, the host of this year's convention, is also feeling the effects of the travel downturn, but less so than some other large markets. A major reason is foreign travel.

Across the country, overseas visitors are down about 10 percent. But for travelers from Europe and Latin America lured by beaches, shopping and a good exchange rate, Miami remains a top U.S. destination.