Accessibility links
Obama's China Envoy Choice Leads A Diplomatic Life Utah Gov. Jon Huntsman Jr. has used his diplomatic skills to tread tricky political ground in a state so conservative and Republican that even some of the rocks are red. Yet he has ventured into territory that has cheered Utah Democrats, and some will be sorry to see him leave if he's confirmed as U.S. ambassador to China. 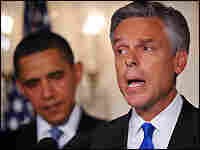 Utah Gov. Jon Huntsman Jr. speaks at the White House on Saturday after President Obama nominated him to be the next U.S. ambassador to China. Mandel Ngan/AFP/Getty Images hide caption 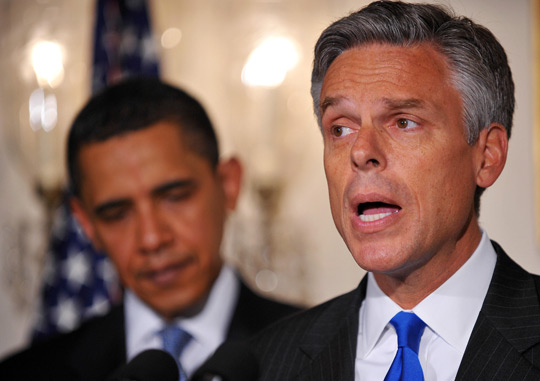 Utah Gov. Jon Huntsman Jr. speaks at the White House on Saturday after President Obama nominated him to be the next U.S. ambassador to China.

Jon Huntsman Jr. says he couldn't say no when President Obama asked him to be ambassador to China.

"I now know why they built the Oval Office," the 49-year-old Republican Utah governor chuckled at a news conference in Salt Lake City on Monday. "It is an impossible room in which to say no."

But diplomacy is nothing new to Huntsman, who spent two years seeking Mormon converts in Taiwan, where he learned to speak Mandarin Chinese. He later navigated foreign business and cultural practices as an executive at Huntsman Chemical, the multinational conglomerate owned by his billionaire father. And he was appointed deputy U.S. trade representative for Asia and ambassador to Singapore. He even has an international family, which includes an adopted child from India and one from China.

"He's very qualified to be ambassador [to China]," says Kirk Jowers, a Republican who directs the Hinckley Institute of Politics at the University of Utah. "He also is a moderate Republican who has not been overly critical of President Obama," even though Huntsman served as a co-chair of John McCain's Republican presidential bid.

Huntsman helps the president show he's bipartisan, Jowers adds. And he was "the lone moderate in the top five [presidential] candidates for 2012. As it was said in Politico, you keep your friends close and your enemies in China."

In Utah, Huntsman used his diplomatic skills to tread tricky political ground. The state is so conservative and Republican that even some of the rocks are red. The paltry number of Democrats in the state Senate could caucus in a minivan. A Mormon apostle in the predominately Mormon state once said it was not possible to be both a good Mormon and a liberal Democrat.

Yet Huntsman has ventured into territory that has cheered Utah Democrats, and some are sorry to see him leave for China.

"The Democrats have a secret saying in this state, that 'Huntsman is really ours,'" says Ted Wilson, a veteran Utah Democrat and former two-term mayor of Salt Lake City.

"That statement comes from years of getting beaten down by Republican power in the state of Utah," Wilson explains. "And to have someone there with a moderate view, even liberal to a degree, was kind of a secret pleasure of Utah Democrats."

Wilson has two issues in mind.

"The hardcore conservatives of the Republican Party rattled at him and yelled at him when he came out and said global warming is real," Wilson says, recalling when Huntsman joined a multistate initiative to combat global warming.

That reaction was as mellow as Jell-O compared with the outrage Huntsman triggered when he said he opposed gay marriage but supported civil unions for same-sex couples. Republican leaders staged a protest rally in the rotunda of the Utah Capitol.

"Gov. Huntsman has placed himself in the precarious position of endorsing a view of human life and family that is at odds with the strong majority ... of his constituency. And more importantly, at odds with a much higher authority!" Bryan Hurlbutt, a pastor at Lifeline Community Church in Utah's West Valley City thundered as the crowd roared its approval.

A Low-Key Approach To Controversial Issues

There's no evidence so far that a higher authority has acted, but the constituency has not abandoned Huntsman.

"He went from a 90 percent approval rating to about 82-83 percent, so it didn't really dent him too much," notes Jowers. "More importantly, public opinion on civil unions absolutely flipped, and where the state had been overwhelmingly against civil unions it became a very close issue after that. So he moved the state of Utah on a very controversial and key issue."

Huntsman did that without strident speeches or a concerted campaign. In fact, his position on civil unions was not revealed in a press release or speech or news conference, but during a casual conversation between his press secretary and a reporter. The governor declined to say much about the issue when asked about it later at one of his regular monthly news conferences.

Jowers considers this a diplomatic approach to politics.

"He is very low key. ... That is his core. That is his nature," Jowers says. "But he is still willing to push the dynamic. ... He will push his issues, but he will do it in an agreeable way."

Is Huntsman Too Diplomatic?

Democrat Ted Wilson complains that Huntsman is too diplomatic at times and doesn't push hard enough. He mentions the Crandall Canyon Mine disaster in Utah two years ago in which nine miners and rescuers were killed. Huntsman stood on the sidelines as the mine's owner held raucous news conferences and blamed an earthquake that scientists say never occurred.

"When there was a time for outrage, I think he tended to keep his polish," Wilson says. "Maybe there is a time once in a while when you need to say you've got a mouthful of it and you better articulate it."

But Wilson also believes Huntsman helped pushed Utah into greater interaction with the nation and the world.

"To me, that was a departure from more of the localized leadership of Utah's past," Wilson adds. "He just showed the depth of someone who's seen India and seen China and looks around and says, 'My goodness, there's a bigger world out there!' And that really gave him a transformational quality I think in Utah politics."

Wilson cites major reform of Utah's complex liquor laws, which are ridiculed by outsiders and considered a barrier to tourism.

Possible Contender For The Presidency

Huntsman also sought to bring moderation to the national Republican Party and appeared to be setting the stage for a 2012 presidential bid. Sources quoted by the Salt Lake Tribune say Huntsman was just a few weeks away from establishing an exploratory presidential campaign committee.

If confirmed as ambassador to China, a 2012 bid is highly unlikely. But Jowers thinks it may set up a better opportunity in 2016. That's because Huntsman can say that "he is now a small-state governor who had the incredible responsibility of ambassador to the most important nation worldwide besides the United States," Jowers says. "That gives him a certain gravitas that he would not otherwise easily get."

Huntsman says he'll resign as Utah governor if he's confirmed by the Senate, a process he expects will take several weeks at least.