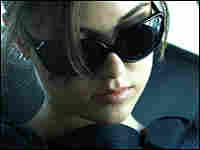 'The Nature Of Your Relationship' 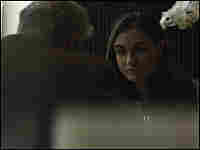 Stripped Bare: Shot quickly and on a small budget, The Girlfriend Experience suggests a documentarian spareness, but shows off some stylish cinematography nonetheless.

Prostitution proves a path to financial independence in The Girlfriend Experience, a new Steven Soderbergh movie shot (and set) in October 2008. But as the Dow Jones Index tanks, the futures market in sex and sympathy is looking precarious.

The latest digital-video experiment from the director of Ocean's Eleven and Sex, Lies & Videotape, this low-budget exercise stars porn-flick veteran Sasha Grey, who plays a tastefully attired Manhattan call girl known alternately as Chelsea or Christine. Her singular appeal is that she offers more than sex. For a night — and a price — she'll be both friend and lover.

Sounds like exhausting work already, but Chelsea also has to tend to a real-life boyfriend who works as a personal trainer to stockbrokers and bond traders. Chris (Chris Santos) is fine with his live-in girlfriend's occupation, but the couple has a few rules.

One of them is that Chelsea is not allowed to go on trips with any of her clients. But when she meets a guy she thinks might be "the one" — even though he's married and lives in L.A. — she decides to spend the weekend with him. Chris objects.

So men can be mean to prostitutes? And the profession is hard to reconcile with emotional stability? Who would have guessed?

In an attempt to make this wisp of a story more compelling, Soderbergh has shattered the narrative, which he presents in chronological disorder. He also cast nonprofessional actors, and encouraged them to improvise. So Chelsea is interviewed by journalist Mark Jacobson, who has actually reported on New York's sex industry.

In both metaphor and technique, The Girlfriend Experience echoes such '60s-vintage Jean-Luc Godard films as My Life to Live and Two or Three Things I Know About Her. Those pictures also equated capitalism and prostitution, similarly punctuating the action with nonfiction elements and characters.

The speed with which The Girlfriend Experience was made and released gives it a near-journalistic feel. Making small talk with clients, both Chelsea and Chris are drawn into discussions of the Wall Street bailout. An Orthodox Jewish diamond merchant, while stripping off his clothes, instructs Chelsea to vote for John McCain.

Despite all the chatter about commerce, alas, the movie is short on information about the actual business of being a call girl. Chelsea never reveals, for example, how she launders what looks to be sizable illicit income for tax purposes.

Indeed, Soderbergh seems less interested in prostitution than in cinematography. With their shallow focus, extensive silhouetting and flaring white light, the movie's individual frames suggest a gallery show of cruddy-chic contemporary photography. The Girlfriend Experience proves that a visually striking film can be made on the fly. But grab-and-run is a more fruitful strategy for images than scripts.