Accessibility links
An Imaginary Cup of Tea for Two Everyone on earth seems to have recorded "Tea for Two," but the multilingual lounge act Pink Martini makes it clear that the cloying classic is a fantasy. Paired with angel-voiced Jimmy Scott, singer China Forbes invests the song with a delicate intimacy.

An Imaginary Cup of Tea for Two

An Imaginary Cup of Tea for Two

Tea for Two [From No No Nanette] 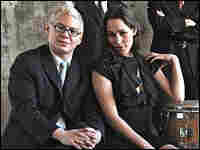 Everyone on earth seems to have recorded "Tea for Two," from Liberace to Art Tatum, from Wayne Newton to Frank Sinatra. So why bother tackling this sappiest of standards? Because the song isn't at all what it might seem. On Hey Eugene!, the new disc by multilingual lounge act Pink Martini, singer China Forbes starts off with the seldom-heard introductory verse, which makes it clear that the whole thing is a fantasy. There is no tea, and no twosome. She's making it all up, because her love life is a disaster.

A few minutes into the song, along comes Forbes' partner: the legendary Jimmy Scott. Forbes is lush and youthful, with a cool, creamy voice. Scott is an 81-year-old vocal legend with Kallman's Syndrome, which means his voice never changed and his growth was stunted. In his old age, his soprano has a wavery, slightly cracked tone that sounds poignant without even trying. Scott sings, as is his style, totally out of time, but in so doing, he creates his own rhythm for the song. The pace is languid; each word is caressed. Only a mellow piano and jazzy guitar keep him and Forbes company.

In this minimalist setting, everything that seems hokey about the lyrics — they're baking a sugar cake for him to take to the boys, they'll raise a family, a boy for her and a girl for him — is invested with a delicate intimacy. Their "Tea for Two" becomes the confession of a woman and her imaginary lover, their innocence shielding them from all the things that might go wrong. As strange as it seems, it's perfectly natural to picture this elfin old man perched upon Forbes' knee, as the two of them sip a cup of tea.