Accessibility links
The New Republic: The Second Coming Of Ruth Bader Ginsburg Diane Wood's ability to get along with people with different points of view has characterized her work at the University of Chicago and on the U.S. Court of Appeals for the Seventh Circuit, where she has won the respect of liberal as well as conservative colleagues since her appointment in 1995. Does this make her a good candidate for the Supreme Court? 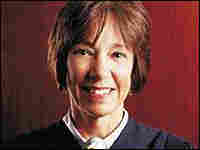 In March, 2008, Martha Nussbaum, a law professor at the University of Chicago, traveled with Judge Diane Wood to a conference in India. The topic was affirmative action in higher education, and before the conference began, they went to Kolkata to meet women leaders who were gathered to talk about how women should claim their legal rights. "Diane borrowed half of my Indian wardrobe and came in like an Indian woman," Nussbaum recalls. "She talked to the group about how she works to give information to women and girls in the Chicago schools about their legal rights, and she was able to engage these people without any condescension. It was amazing to me how she got along with people of all social backgrounds--Muslims, Hindus, upper and lower caste."

Wood's ability to get along with people with different points of view has characterized her work at the University of Chicago and on the U.S. Court of Appeals for the Seventh Circuit, where she has won the respect of liberal as well as conservative colleagues since her appointment in 1995. "She has an ideal judicial temperament," says Richard Epstein, a libertarian scholar at the University of Chicago. "She has the obvious admiration of her colleagues, her clerks, and the lawyers who practice before her. Indeed I have never heard anyone ever utter a word of her performance since she has been on the bench. She is open to argument on all questions, and the lawyers who appear before her know that they will get a respectful hearing. She is theoretically rigorous but nondogmatic. I think that her nomination should be greeted with acclamation by Democrats and Republicans alike." Wood has also, according to Nussbaum, won the respect of her conservative judicial colleagues, Richard Posner and Frank Easterbrook.

Born in New Jersey (her father was an accountant for Exxon), Wood attended the University of Texas Law School, where her professor and future University of Chicago colleague Albert Alschuler recalls that, as a first year student in 1973, the year Roe v. Wade was decided, she took a "strong pro Roe position" in class, defending the decision against student critics. "I called on her every day for a week," says Alschuler, and "the reason I did was she was so good in defending Roe" against counter-arguments raised by classmates. After graduation, Wood went on to clerk for Judge Irving Goldberg and Justice Harry Blackmun and, from 1981 to 1995, she taught at the University of Chicago, a tenure that was interspersed with two stints at the Justice Department, including one as Deputy Assistant Attorney General in the Antitrust Division. President Clinton nominated Wood to the bench in 1995.

Two years earlier, I had been one of the earliest and most enthusiastic advocates of the Supreme Court nomination of Ruth Bader Ginsburg. Of all the candidates Clinton considered, I argued, Ginsburg was the most respected by liberals and conservatives and the most likely to win over the swing justices. (On the bench, of course, Ginsburg has surpassed expectations.) When Clinton appointed Wood to the appellate court, she was little known outside the legal academy--unlike Ginsburg at the time of her appellate nomination. I lamented the fact that Clinton was not appointing more "legal scholars with national reputations"--scholars "of the caliber of Ginsburg and Breyer, his superb Supreme Court nominees," in order to create a deep bench of "liberal intellectuals who could challenge the conservatives." (Indeed, if President Clinton had appointed to the appellate courts scholars such as Stanford's Pam Karlan and Kathleen Sullivan, both of whom would make stellar justices, President Obama might find it easier today to appoint them to the Supreme Court.)

But I underestimated Wood. After nearly 14 years on the appellate court, she has proved to be such an impressive match for her conservative colleagues that it appears that, of all the current Supreme Court candidates, her temperament and moderate, incremental liberalism most resemble Ginsburg's. "She is very careful, she is respectful of precedent, she is a craftsperson, and she is fairly incremental in her approach," says Geoffrey Stone of the University of Chicago and the author of a book on the suppression of speech during war. "I think she does believe that the role of judges, in part, is to ensure that the oppressed and the disenfranchised and dissenters get a fair shake in the political system, which would be a significant part of the moderate liberal element of Diane. But she's certainly not in any way result-oriented."

In the most recent Almanac of the Federal Judiciary, Wood gets consistently high marks from anonymous lawyers for her legal abilities, courtroom demeanor, and active participation in oral argument. Some lawyers note that she is a liberal by the standards of the Seventh Circuit, and that "she appears to be more neutral than some of the others, but still has that slight government tilt." Because she is both strong on women's rights and moderate on crime, Wood seems like a Clintonian New Democrat.

But the area in which she would bring the greatest degree of intellectual diversity is in her specialty: antitrust law. There are, on the current Court, no economic populists in the mode of William O. Douglas, who boasted that he wanted "to bend the law against the corporations and in favor of the environment." The current Democratic justices, led by former antitrust scholar Stephen Breyer, are relatively moderate on antitrust enforcement. (During its first two terms, the Roberts Court heard seven antitrust cases and decided all of them in favor of the corporate defendant.) Wood's scholarly record suggests she might be more vigorous. She came to argue for voluntary cooperation among international antitrust agencies in the hope that cooperation may eventually lead the way to binding agreements between countries about how to police international economic competition.

Because of her age (she will be 59 on July 4) Wood may be less appealing to the White House than Sonia Sotomayor (54) or Elena Kagan (49).And as an antitrust scholar and a circuit judge, Wood has not had the opportunity to develop an overarching constitutional vision--unlike Ginsburg who, as head of the women's rights project of the ACLU, developed a pioneering approach to gender equality. As an incrementalist who believes that courts should rule narrowly and move cautiously, she may be unlikely to offer bold liberal leadership on the Court. But in a 1995 speech at NYU, she made a powerful argument about how liberals can respect the text and history of the Constitution while still understanding the words at a "high level of generality," in order to ensure that constitutional "evolution will continue to occur through adjudication." Her combination of moderate liberalism and a judicious temperament would make her a worthy successor to David Souter.

Jeffrey Rosen is the legal affairs editor at The New Republic.