Accessibility links
Keeping The Memory Of World War II Veterans Alive For the past five years, commentator Natalie Mariano has worked as a physician at the Veterans Affairs Primary Care Center in Hyannis, Mass. Of the veterans she treats, most served in Vietnam or Korea. These days, she's seeing more Iraq war vets, but fewer veterans of World War II 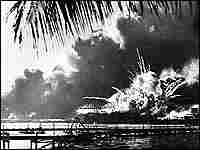 The USS Shaw was attacked during the Japanese assault on Pearl Harbor on Dec. 7, 1941. U.S. Naval Historical Center hide caption 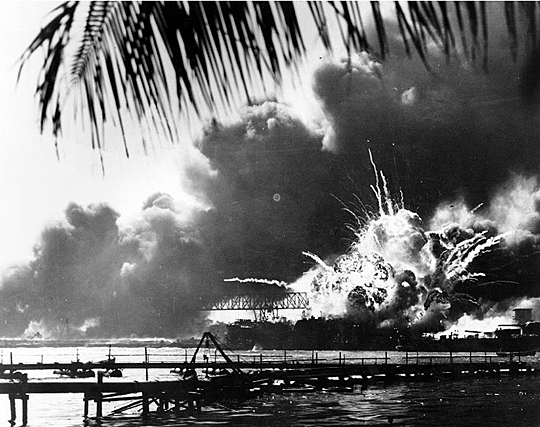 The USS Shaw was attacked during the Japanese assault on Pearl Harbor on Dec. 7, 1941.

He jumps out of his chair and hugs me when I walk into the exam room. He has a childlike smile that fills up his face.

His head is almost bald; he's missed a few whiskers shaving; and tufts of white hair poke out of both ears. His eyes are gunmetal gray, set under bushy white eyebrows.

I ask him how he's been doing. He laughs and tells me he's fine for an old goat.

"Except for his memory," his wife whispers. She sits in a corner, holding a plastic bag filled with his medicines.

"Ask him what he had for breakfast," she says.

But I change the subject and ask him if he's been doing his walking every day.

"But he forgets to take his cane," his wife chimes in. "I'm afraid one day he'll fall and break his hip."

"Do you have any other vets who were at Pearl Harbor?" he asks me.

"No, and that's why it's so important to take good care of you heroes."

I check his blood pressure and listen to his heart and his lungs. He's 88 years old. He's outlived all of his brothers and sisters, and most of his friends. He's survived two heart attacks and a stroke. But in his mind, the only thing he survived is Pearl Harbor. Nightmares of enemy planes filling the sky still awaken him. He can still see his fellow seamen jumping into the water as their ships blaze. He can still hear their screams. He knows the names of each of the shipmates he lost from his ship, but he can't remember what he had for breakfast.

"My best buddies went down with the ship," he tells me again. "I was one of the few who survived." Each time he tells me, it's as if it's a confession, whispered with regret and sadness.

"Are you still writing your memoir?" I ask him.

"Oh yes. Someday I'll bring it in so you can read it."

But his wife corrects him. "What about Tuesday night when you had to take three nitro?"

"When did you last see your cardiologist?" I ask him.

He glances at his wife, who says, "Yesterday."

He turns back to me and says, "Do you have any other vets who were at Pearl Harbor?"