Accessibility links
Eminem: A 'Relapse' Of Horror? A full year out of rehab, the controversial rapper Eminem is back with Relapse, his first album since 2004. Curiously, he brings back an obscure rap subgenre called horror-core, and critic Robert Christgau thinks he should have stayed home a little longer.

Must Be the Ganja 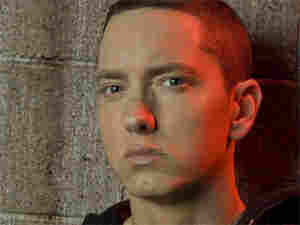 Should Eminem have come back with an album indebted to an obscure rap genre? Courtesy of the artist hide caption

I think Eminem is a major artist. He's amazingly adept at channeling adolescent anger and exuberance into songs that are psychologically complex and wicked funny. Others consider him some kind of musical sociopath. But the most maniacal Eminem-hater wouldn't deny that he can rhyme. He's famously deft with words, their sound and their meaning. Listen to all the variations on the syllable "core" in the first lines of the first verse of the first song on his first album in four and a half years. The album is Relapse; the song, "3 a.m."

"You're walkin' down a horror corridor" — remember that first line while I explain that I don't just enjoy Eminem aesthetically. I defend him morally. I believe that the much-maligned track from his Marshall Mathers LP, "Kim," which imagines Eminem murdering his ex-wife, is intended as and functions as a scathing, indelibly disturbing expose of male jealousy and rage. I believe that the endlessly cited "Criminal" from the same album, with its apparent threat to "stab you in the head," is explicitly and unmistakably about the power of words, not knives, to injure. But I also believe that when Eminem kicks off Relapse with the phrase "horror corridor," he's telling us that his comeback is a horror-core album — and that this was a really stupid idea. If you've never heard of "horror-core," it's a minor hip-hop subgenre specializing in musical horror movies.

Horror-core songs are so outrageous, they're impossible to mistake for acts of advocacy. No one will think Eminem plans to lynch Lindsay Lohan with 66 inches of extension cord in "Same Song & Dance." But please, all those "inch" sounds don't make this witless fantasy as interesting — never mind laughworthy — as any of Eminem's songs on his previous albums. On Relapse, rape, murder, drugs and unspeakable combinations of the three abound. You don't have to believe he's advocating anything to find the casual, almost ingrained misogyny here hurtful, distasteful and dangerous the way his deeply felt private obsessions never were.

Predictably, Eminem leaves himself an out on Relapse. Three-quarters through, right after "Must Be the Ganja," comes a skit where medics save Eminem from an overdose, followed by "Deja Vu," which describes the multiple addictions from which the biographical Eminem, Marshall Mathers, reports he's been free since April 2008. Listening, you realize that in addition to all the ultra-violence, there's loads of dope on this album — and that maybe, possibly, Eminem is implying that the dope caused the violence. If I liked horror movies more, perhaps I could content myself with that rationalization. But I prefer my cartoons funnier. And I prefer my inspirational anthems smarter than the one Eminem calls "Beautiful."