Accessibility links
Can Positive Thoughts Help Heal Another Person? The idea that positive thoughts and prayer can affect your health has been taught at medical schools for years. But can your thoughts affect another person physically? A few renegade scientists are conducting studies between loved ones to find that out — and they say it's possible.

Fourth of a five-part series

Ninety percent of Americans say they pray — for their health, or their love life or their final exams. But does prayer do any good?

For decades, scientists have tried to test the power of prayer and positive thinking, with mixed results. Now some scientists are fording new — and controversial — territory. 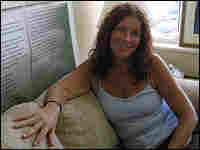 Sheri Kaplan tested positive for HIV more than 15 years ago. Kaplan has never taken medicine, yet the disease has not progressed to AIDS. She prays and meditates every day and believes God is keeping the virus at bay. Barbara Bradley Hagerty/NPR hide caption 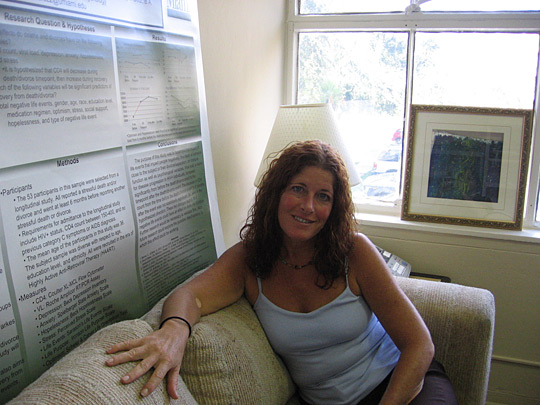 Sheri Kaplan tested positive for HIV more than 15 years ago. Kaplan has never taken medicine, yet the disease has not progressed to AIDS. She prays and meditates every day and believes God is keeping the virus at bay.

When I first meet Sheri Kaplan, she is perched on a plastic chair at a Miami clinic, holding out her arm as a researcher draws several vials of blood.

"I'm quite excited about my blood work this time," she says. "I've got no stress and I'm proud of it."

Kaplan is tanned and freckled, with wavy red hair and a cocky laugh. She is defiantly healthy for a person who has lived with HIV for the past 15 years.

"God didn't want me to die or even get sick," she asserts. "I've never had any opportunistic infections, because I had no time to be down."

Kaplan's faith is unorthodox, but it's central to her life. She was raised Jewish, and although she claims no formal religion now, she prays and meditates every day. She believes God is keeping the virus at bay and that her faith is the reason she's alive today.

"Everything starts from a thought, and then the thought creates a reaction," she says. "And I have the power to control my mind, before it gets to a physical level or an emotional level."

For the past decade, Kaplan has been coming every few months to see Gail Ironson, a professor at the University of Miami. Ironson, an AIDS researcher, runs down a battery of questions.

"During this time have you had any HIV- or AIDS-related symptoms?" Ironson asks.

"What percent of your well-being do you think is due to your own attitudes and behaviors versus medical care?" Ironson continues.

Kaplan has never taken medicine, yet the disease has not progressed to AIDS (and she is not part of the population that has a mutation in the CCR5 gene that prevents progression of HIV to AIDS). In the mid-1990s, when having HIV was akin to a death sentence, Ironson noticed that a number of patients like Kaplan never got sick. Ironson wanted to know why. And she found something surprising.

"If you ask people what's kept you going so long, what keeps you healthy, often people would say spirituality," she says. "It was something that just kept coming up in the interviews, and that's why I decided to look at it."

Ironson began to zero in on a patient's relationship with God in an attempt to predict how fast the disease would progress.

She focused on two key indicators. She measured viral load, which tells how much of the virus is present in a person's body, and immune cells called CD-4 cells, which help fight off the AIDS virus.

Ironson says over time, those who turned to God after their diagnosis had a much lower viral load and maintained those powerful immune cells at a much higher rate than those who turned away from God.

"Just so I understand it," I confirm, "if someone weren't taking their meds and were depressed, they would still fare better if they increased in spirituality?"

"Yes," she says. "Now, I'm not in any way suggesting that people don't take their meds," she adds quickly, laughing. "This is really an important point. However, the effects of spirituality are over and above."

Can My Prayers Affect Your Body?

Ironson calls the finding extraordinary. She was one of the first researchers to connect a patient's approach to God to specific chemical changes in the body.

Of course, mind-body medicine — the idea that my thoughts and emotions can affect my own health — has been standard teaching at many medical schools for years. But does that mean my thoughts can affect another person's body?

Sloan notes that studies in the 1980s and '90s seemed to show that praying for a patient in a hospital sped up his recovery. But he says those studies were flawed. More recent, more rigorous studies, he argues, showed prayer either had no effect, or the patients actually grew worse.

Sloan says science understands how a person's thoughts can influence his own body — for example, through chemical changes in the brain that affect the immune system.

"There are no plausible mechanisms that account for how somebody's thoughts or prayers can influence the health of another person," Sloan says. "None. We know of nothing."

A few renegade scientists aren't satisfied with that. For years, they say, no one knew how morphine or aspirin worked. They just knew it worked. These researchers say typical prayer studies, in which a stranger prays for a stranger from a script, miss the critical element: a personal connection. So they're asking a different sort of question. Can a husband's love for his wife affect her body?

Or, as Marilyn Schlitz puts it: "Does our consciousness have the capacity to reach out and connect to someone else in a way that's health-promoting?"

On a bright spring day, Schlitz is leading Teena and J.D. Miller down a path to the laboratory at the Institute of Noetic Sciences, north of San Francisco. Schlitz is the president of the institute, which conducts research on consciousness and spirituality. The Millers have been married a decade and their affection is palpable — making them perfect for the so-called Love Study. 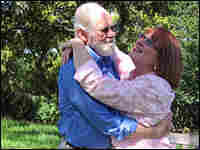 J.D. and Teena Miller, who have been married for a decade, took part in the "Love Study" at the Institute of Noetic Sciences. Barbara Bradley Hagerty/NPR hide caption 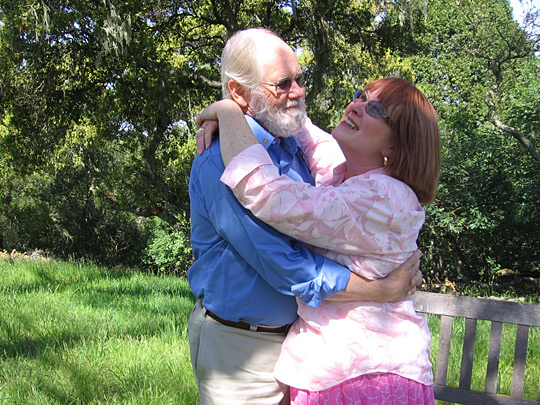 J.D. and Teena Miller, who have been married for a decade, took part in the "Love Study" at the Institute of Noetic Sciences.

Schlitz takes Teena into an isolated room, where no sound can come in or go out. Teena settles into a deep armchair as Schlitz attaches electrodes to her right hand.

"This is measuring blood flow in your thumb, and this is your skin conductance activity," the researcher explains. "So basically both of these are measures of your unconscious nervous system."

Schlitz locks Teena into the electromagnetically shielded chamber, then ushers J.D. into another isolated room with a closed-circuit television. She explains that the screen will go on and off. And at random intervals, Teena's image will appear on the screen for 10 seconds.

"And so during the times when you see her," she instructs, "it's your opportunity to think about sending loving, compassionate intention."

As the session begins, Dean Radin, a senior scientist here, watches as a computer shows changes in J.D.'s blood pressure and perspiration. When J.D. sees the image of his wife, the steady lines suddenly jump and become ragged. The question is: Will Teena's nervous system follow suit?

"Notice how here ... see, there's a change in the blood volume," says Radin, pointing to a screen charting Teena's measurements. "A sudden change like that is sometimes associated with an orienting response. If you suddenly hear somebody whispering in your ear, and there's nobody around, you have this sense of what? What was that? That's more or less what we're seeing in the physiology."

An hour later, Radin displays Teena's graph, which shows a flat line during the times her husband was not staring at her image, but when her husband began to stare at her, she stopped relaxing and became "aroused" within about two seconds.

After running 36 couples through this test, the researchers found that when one person focused his thoughts on his partner, the partner's blood flow and perspiration dramatically changed within two seconds. The odds of this happening by chance were 1 in 11,000. Three dozen double blind, randomized studies by such institutions as the University of Washington and the University of Edinburgh have reported similar results.

The 'Quantum Entanglement' Of Love

So how do you explain this? No one really knows. But Radin and a few others think that a theory known as "quantum entanglement" may offer some clues.

Here's how it works. Once two particles have interacted, if you separate them, even by miles, they behave as if they're still connected. So far, this has only been demonstrated on the subatomic level.

But Radin wonders: Could people in close relationships — couples, siblings, parent and child — also be "entangled"? Not just emotionally, and psychologically — but also physically?

"If it is true that entanglement actually persists, by means of which we don't understand," he says, "if they are physically entangled, you should be able to separate them, poke one, and see the other one flinch."

This idea — that we may be connected at some molecular level — echoes the words of mystics down the ages. And it appeals to some scientists.

But it infuriates others — like Columbia University's Sloan. The underlying idea is wrong, he says. Entanglement just doesn't work this way.

"Physicists are very clear that the relationship is purely correlational and not causal," Sloan says. "There is nothing causal about quantum entanglement. It's good to be open-minded, but not so open-minded that your brains fall out."

Radin and others agree that that's what science says right now. But they say these findings eventually have to be explained somehow.

Part 5 of this series will explore whether people have souls that survive a brain's death.