Accessibility links
Money To Run, But No Skills To Hide "Executive fugitives" are leaders of industry and finance toppled by the economic crisis and, often, their own greed. Facing financial ruin and even worse — prison — they decide to make a run for it. But these days, officials say, life on the run isn't that easy, even with a suitcase full of cash. 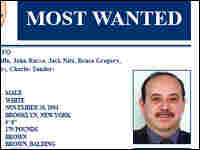 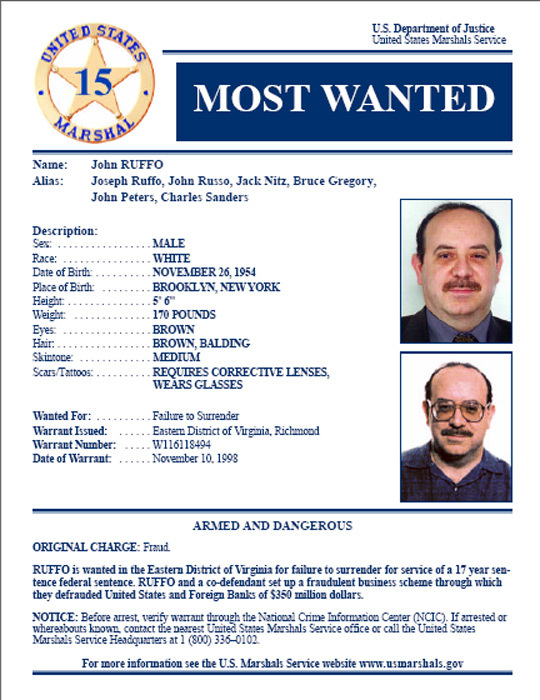 Marcus Schrenker had a yacht, a plane and a mansion in a place called Cocktail Cove, Ind. But officials say his life was all a scam, paid for by his unwitting investors.

This past January, officials say, when the scam was beginning to unravel, Schrenker boarded his single-engine plane and took off from Anderson, Ind. A few hours later, the plane crashed into the Florida swamp — without any sign of Schrenker.

The video of his crashed plane was all over the news, and watching from his office just outside Washington, D.C., was U.S. Marshal Geoff Shank. He knew in an instant that the money man was on the run — and that they would probably catch him in a matter of hours.

"He went through all this elaborate planning, and it really only took us a day or so to lock him up," Shank said.

Men like Schrenker are called "executive fugitives." They're leaders of industry and finance toppled by the economic crisis and, often, their own greed. Facing financial ruin and even worse — prison — they decide to make a run for it. Already this year, two have tried to fake their own deaths, and another has tried to hide out in Latin America.

But these men may be in for a shock. These days, officials say, life on the run isn't that easy, even with a suitcase full of cash.

Schrenker found that out the hard way. Authorities say he tried to fake his own death by parachuting out of his plane, jumping on a stashed motorcycle and hiding out at a local campground. Shank said the plan was a little more daredevil than most, but it was still the same flawed premise: that the Marshals would buy it.

"We've had guys pin notes to trees, leave an article of clothing with their blood on it," Shank said. They're thinking we're just going to go, 'Oh, OK. He's dead. He left a note, right?'"

Shank says Schrenker gets points for pitching a tent and staying off the grid. But then he made the classic rich fugitive mistake — he e-mailed a friend.

"The vast majority of high-profile fugitives such as this guy are caught," Shank said. "It's either familiarity, lack of human contact or you miss going to the barista to get a coffee."

Shank oversees the hunt for more than 100,000 fugitives a year. Most are career criminals, the kind used to living dirty. But executive fugitives, he says, are a different breed. Shank says they're self-involved, convinced of their own importance — and unable to live without 5-star hotels, private planes and limos, which all require credit cards.

Take former hedge fund manager Samuel Israel. He tried to fake his own death last summer by parking his SUV on a bridge outside New York City and leaving a suicide note. Shank says his team caught Israel by convincing Israel's mother she should tell her son to turn himself in. Sure enough, a few months later, Israel called his mom. And then he turned himself in.

"How long can you run and stay away from all the things that you love?" Shank said. "It's difficult."

But let's say you've done everything right — you paid cash for that used RV, you're moving from state to state, you cut all ties. You're still going to need a new identity. Unfortunately, that's a bit trickier these days.

In a room at the FBI's lab in Quantico, Va., Diana Harrison, unit chief of the Questioned Documents Unit, is pouring over a sampling of documents fugitives and others have tried to pass as real.

"This doesn't look right," she says, pointing to one driver's license. "The position of where the pictures are — it just doesn't feel right."

Harrison says that since Sept. 11, most states have added things like holograms, data threads and microprinting to their licenses. But that's nothing compared to the security on the document you really need: a passport. With a dozen pages and computer authentication, Harrison says don't even bother trying to fake it.

"The easier way [to get one] is to obtain a valid [passport] fraudulently," she says.

Life On The Lam

There is one person who knows that better than anyone else: Frank Abagnale.

Abagnale's life on the run was made famous by the movie Catch Me If You Can. Abagnale spent four years hiding from the FBI, impersonating pilots and doctors, claiming to attend Harvard University and the University of California, Berkeley, with real documents.

Abagnale rarely talks to the media, but he agreed to talk to NPR.

"It's amazing to someone like me who has done this in their lifetime," Abagnale said. "But then 40 years later ... it's as simple if not easier to do than when I did it."

"You would really be not very smart to stay in the states and hide," he said. "I mean, you might get out to some farm in the middle of nowhere, but sooner or later people will start to question who you are and where you came from."

And what rich executive fugitive wants to live on a farm in the middle of nowhere? Not many. Officials say most are caught holed up in expensive houses in prime locations.

The FBI finally arrested Abagnale in 1969 when he was 21. Now he works for them as a security consultant.

In his years on the run, he stole $2.5 million with counterfeit checks. He lived the life most fugitives dream of: world travel, luxury accommodations and, in his case, older women. But here's a warning to future fugitives: He hated it.

"It's a very lonely life," he said. "There's nobody you can trust, you can't confide in anybody. It's not a life I would wish on my worst enemy."

Besides, he says, you will probably get caught.

"The law sometimes sleeps, but the law never dies," he said.

'They Have To Be Lucky Every Day'

His finger has stopped on the photo of a balding, middle-aged man.

"Yeah, John Ruffo," he says with a sigh. "We're still looking for him."

Ruffo was sentenced to 17 years for bilking investors out of $350 million. He's been on the run for 11 years.

"Does it make me angry?" Shank asks. "Yeah. Did I think about him today? Yeah ... I think he's in a cafe on a cobblestone street somewhere, drinking espresso."

It's possible Ruffo escaped his hometown of Forest Hills, N.Y. And it's possible he may have found a new identity. He may have made it abroad to live a nondescript life. He may have even made it to one of the few countries without an extradition treaty: perhaps North Korea, Mongolia. The Americas are out now. So are Europe and most of Asia. Even not-so-friendly countries routinely trade fugitives.

But wherever John Ruffo is, Shank says the one thing he knows for sure is that he misses home. And one day, it'll get him caught.

He says they will never give up on Ruffo or any of the other fugitives they're hunting.

Until then, Shank says, enjoy the espresso.