Accessibility links
Countries Clamor For New 'Pandemic' Definition With its rapid spread through North America and Japan, many experts say swine flu has reached pandemic proportions. So why is the World Health Organization stalling on its declaration? 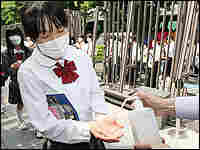 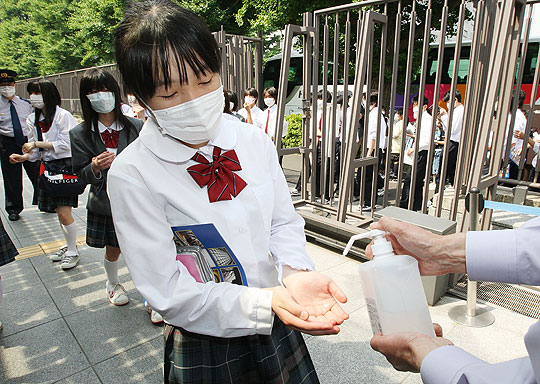 Get Daily Updates And Maps On The Spread Of Swine Flu, From The World Health Organization
Swine Flu Timeline
More On The WHO Pandemic Definition 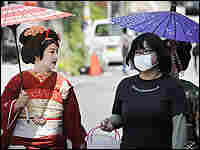 A kimono-clad geisha walks with a woman wearing a face mask in Kyoto, Japan, on Wednesday. The number of swine flu infections in Japan rose to 232 on Wednesday, most of them students, officials said. Kazuhiro Nogi/AFP/Getty Images hide caption 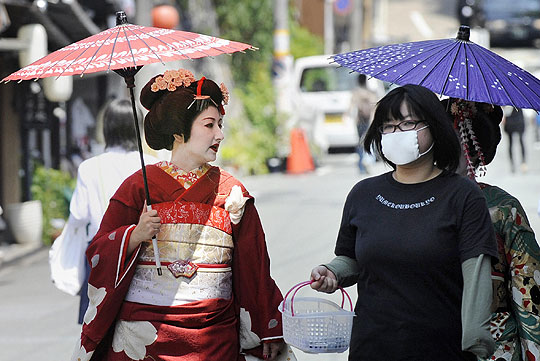 A kimono-clad geisha walks with a woman wearing a face mask in Kyoto, Japan, on Wednesday. The number of swine flu infections in Japan rose to 232 on Wednesday, most of them students, officials said.

In the 21 days since the World Health Organization declared that the first flu pandemic of the century is "imminent," it's become unclear just what "imminent" means. It's also unclear what would tip the world into what the WHO calls Phase 6 — i.e., an actual pandemic.

The WHO is a creature of its 193 member-states. And some heavy hitters — China, Britain, Japan — are saying "whoa!" to the idea of declaring a pandemic. Instead, they want to redefine "pandemic."

WHO Director-General Margaret Chan is struggling to respond to the situation, even as evidence mounts that the world has indeed entered a flu pandemic — by the WHO's current definition.

At a meeting in Geneva on Thursday, Chan put forward a new reason for hesitating to declare a pandemic. "One of the things we're not seeing is the same spread in the Southern Hemisphere that we've seen in the first three countries," she said, according to Agence France-Press.

So far, 10 countries in Central and South America have reported a total of 125 cases of swine flu — not the explosive spread seen in Mexico, the United States and Canada.

Up to now, the WHO has said it was uncertainty about what was happening in Japan that prevented it from crossing the pandemic threshold.

But the situation in Japan now seems to satisfy the WHO's current definition for Phase 6. It says a flu pandemic is "sustained community-level outbreaks" of a new flu virus in two or more regions of the world. In mid-April, North America became region one, leading the WHO to bump the pandemic alert to Phase 5.

Japan is on the verge of qualifying as the second region, because it counts at least 259 cases of swine flu, up from only four in less than a week. Japanese health authorities are reportedly thinking about declaring Osaka and Hyogo prefectures as "areas with widespread infection." Tokyo and two other prefectures would be considered "areas with limited infections."

Peter Cordingley, a spokesman for WHO's Eastern Pacific region, says the vast majority of cases in Japan so far are among schoolchildren or their families, although cases are beginning to show up that are not linked to these. But he leaves no doubt about what officials expect.

"This is flu," Cordingley says. "You're not going to stop it. This is the beginning of the spread of the virus in Japan. We accept that it's going to happen everywhere."

But that's not the same, he adds, as a catastrophic flu pandemic that kills millions.

So why the hesitation to declare a pandemic? WHO member-states have apparently awakened to the far-reaching implications — for travel, trade and public anxiety — of declaring that a flu pandemic has begun.

Some nations are complaining that not all pandemics are equal — that "pandemic" needs to be global spread of an unusually severe new disease, not just a virus that pretty much looks like regular seasonal flu, except that it prefers to sicken children, teens and young adults.

The WHO is slowly coming around to the fact that the pandemic plan it designed three years ago only had the H5N1 bird flu in mind, which kills 60 percent of the people it infects.

Instead, it finds itself grappling with a new swine flu virus that — so far — is similar to seasonal flu in severity.

WHO is scrambling to rewrite its "flu pandemic" definition. But it's not so easy. Somehow it will have to work a danger rating into the new definition. How many people need to get sick and die, in how many places, before a particular pandemic threshold is reached?

Experts say it's not impossible. A new scale could look at how much a new flu virus deviates from the average death and serious-illness rates for seasonal flu. But it's not so easy to put that into language that the world's health ministers can agree on. That language must also consider whether the public can easily understand the new definition, and how people will react.

Meanwhile, the WHO will find itself twisting even more in the wind if it has to keep pretending that events don't yet satisfy the current definition of a full-fledged pandemic.

And yes, credibility is important. Remember the boy who cried "wolf"?