Accessibility links
Summer Sun Without The Burns And Bug Bites With summer weather rolling in, many people are warming up the grill, but it's important to keep yourself protected from summer's strong sun and insect populations. 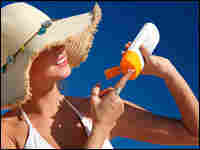 To fully protect your skin, apply about a shot glass worth of sunscreen on your body. Wearing a wide-brimmed hat also can help protect your face and keep you cool. iStockphoto.com hide caption

Find out how UV rays damage the skin, and get a list of essential sunscreen ingredients.

Ah ... summer. It's here. If you want the sun without the sunburn, and the great outdoors without the bug bites or worrying about dehydration, then you have to plan ahead. Here are our tips:

The bottom line is that covering up our skin and eyes with sunscreen and sunglasses helps protect us from damaging UV radiation. And spraying on some repellent can protect us against annoying — and sometimes dangerous — mosquito bites.

I'm not your mom. I won't lecture. But you should know that a broad-spectrum sunscreen with both UVA and UVB protection can keep those wrinkles at bay and prevent damage to the skin cells.

Both UVA and UVB are types of ultraviolet radiation that can damage skin.

UVB rays are primarily responsible for sunburn, according to the Food and Drug Administration, and the sunburn protection factor, or SPF, ratings indicate how much protection the sunscreen offers against UVB rays. Experts recommend using a sunscreen of SPF 15 or higher and reapplying every two hours, as all sunscreens wear off eventually.

But researchers now know that UVA radiation can damage skin as well, and it actually penetrates the skin more than UVB. The FDA has proposed a four-star system — that would be prominently displayed on sunscreen bottles near the SPF rating — to inform consumers how well a sunscreen protects against UVA. It has not been finalized, but an FDA spokesperson says the agency hopes to complete the four-star labeling system by the end of 2009.

If you want the full protection of an SPF 30 sunscreen, make sure you are applying enough of it. Experts say one ounce — about a shot glass full — will keep you covered. You need to apply it 30 minutes before going in the sun.

And, if you do get burned, some remedies include applying a cool, wet washcloth and using 100 percent aloe vera gel.

Many zinc oxide sunblocks now include tiny particles of the sun-blocking ingredients. The result: They no longer cover the face in a white paste; they go on clear.

"Titanium dioxide and zinc oxide are sunscreen ingredients that provide broad-spectrum protection," says Anna Bruckner, a dermatologist at Stanford University. And, she says, they can be less irritating than chemical sunscreens.

It's not just our skin that needs protection. A good pair of sunglasses can protect our eyes from damaging UV radiation. Experts say excessive exposure to UVA and UVB rays can contribute to the development of cataracts, a major cause of vision loss.

When buying sunglasses, look for a sticker that indicates they have a UV coating, says ophthalmologist Wayne Bizer. This label means the manufacturer has added a clear UV coating to protect the eyes. Don't be fooled into thinking that dark lenses alone block all of the UV radiation, he says.

If you're fishing or boating, polarized lenses are a good choice because they reflect glare from the water. Polarized lenses do not block ultraviolet rays, so Bizer says to look for a pair that also adds a UV coating.

Another option that offers excellent protection against ultraviolet light is polycarbonate lenses, which are crafted from a special material. Glasses made with polycarbonate lenses block 99 percent of UVA and UVB rays, according to the American Academy of Ophthalmology.

Beat The Heat With Water

Don't wait until you are thirsty to hydrate. In the summer heat, it's smart to drink early and often, especially when outdoor plans include kids and a lot of physical activity.

Technically, dehydration sets in when a person has lost 2 percent of his or her body weight. Because that can happen more quickly in small children, pediatrician Chris Longhurst says it is good to plan ahead.

By the time kids feel thirsty, he says, they are probably already dehydrated.

And for athlete or sports camps, the American College of Sports Medicine recommends that athletes drink 16 ounces of fluids — two full glasses — a couple of hours before starting practice or exercise.

What About Sports Drinks Or Caffeine?

"Water is the mainstay of rehydration," Longhurst says. Most sports drinks contain a lot of sugar, which can slow the uptake of fluids.

There is much debate about the diuretic effect of caffeine, says Doug Casa of the University of Connecticut, but a cup of coffee won't stand in the way of hydration.

If you drank one liter of water, he says, you'd probably retain 800 milliliters or so. Whereas, if you drink a caffeinated beverage, "you might retain, say, 700 milliliters of it and maybe lose 300 to urine," he says.

The net effect is that you're still getting most of the extra fluid you need — even if it's a little less with coffee, tea or caffeinated energy drinks.

It's not just the sun that is stronger in the summer. In many places, mosquitoes also come out in full force. Here are a few ways to keep the pesky, buzzing bugs at bay.

The Centers for Disease Control and Prevention does not endorse name brands, but it has green-lighted four types of repellents that typically provide long-lasting protection from mosquito bites.

-- Introduced more than 60 years ago, DEET-based products are widely available and extremely effective.

-- A chemical compound called Picaridin is a relative newcomer. It is the active ingredient in a line of Cutter repellents and has been shown in peer-reviewed scientific studies to be effective.

-- IR3535 is the chemical compound used in a line of Avon products called Skin So Soft Bug Guard.

-- The oil of lemon eucalyptus, or PMD — a synthesized version of the oil — is also an effective repellent, according to the CDC. However, studies show that repellents containing this ingredient will wear off and lose effectiveness faster than DEET products.

In general, according to the CDC, the higher the concentration of the active ingredient, the longer the protection will hold up. Products containing less than 10 percent of an active ingredient may only provide one to two hours of protection.