Accessibility links
In Haiti, A Low-Wage Job Is Better Than None In a country where 70 percent of the population is unemployed, many people would welcome low-wage manufacturing jobs. A preferential trade deal with the U.S. could help lure those jobs to Haiti. 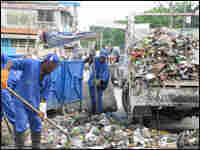 Workers shovel garbage from the streets of a neighborhood in Port-au-Prince, Haiti. The work is dirty, hot and ill-paid, but it is a coveted job in a country with 70 percent unemployment. Corey Flintoff/NPR hide caption 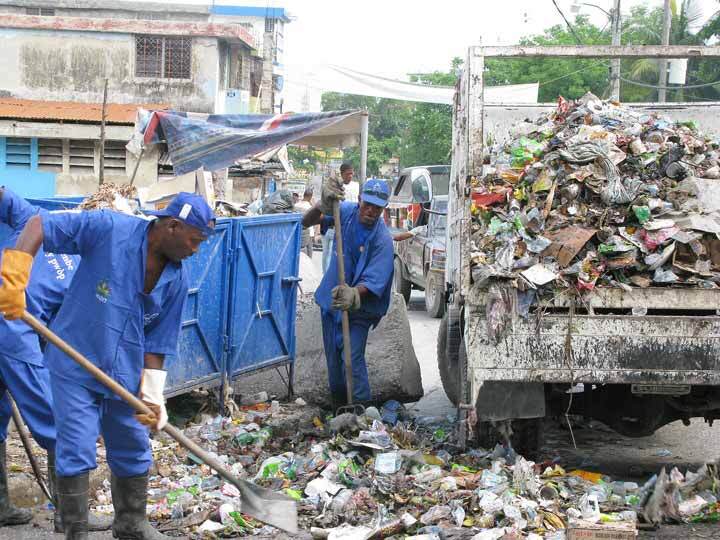 Workers shovel garbage from the streets of a neighborhood in Port-au-Prince, Haiti. The work is dirty, hot and ill-paid, but it is a coveted job in a country with 70 percent unemployment. 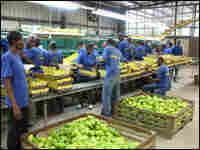 Workers pack mangos for shipment to the U.S. A new minimum-wage law would raise their pay to just over $5 day. Corey Flintoff/NPR hide caption 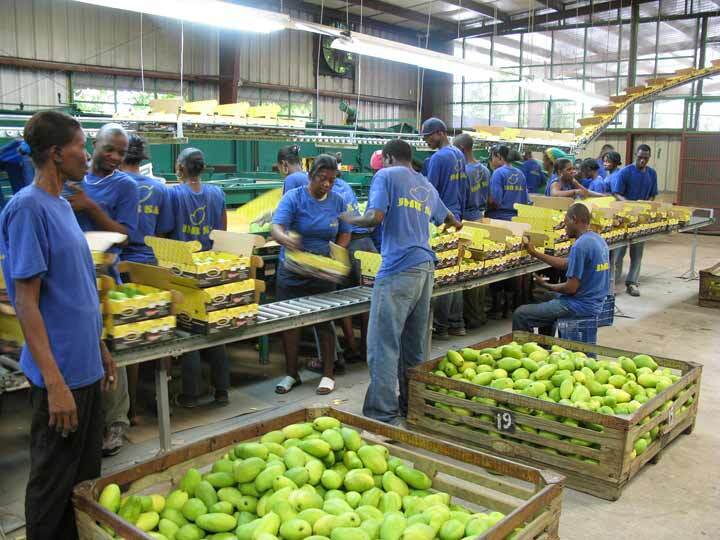 Workers pack mangos for shipment to the U.S. A new minimum-wage law would raise their pay to just over $5 day. 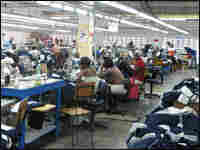 The Haitian government is hoping that a preferential trade deal with the U.S. will help lure manufacturing jobs to Haiti. Jeans made at this factory can be shipped to the U.S. duty-free. Corey Flintoff/NPR hide caption 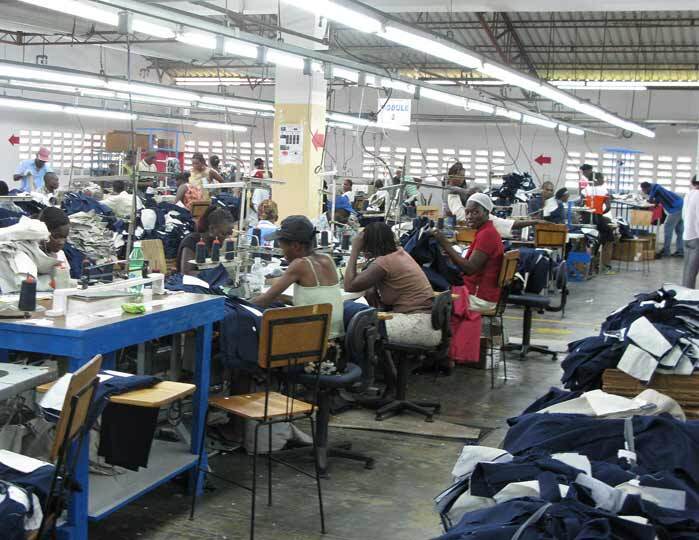 The Haitian government is hoping that a preferential trade deal with the U.S. will help lure manufacturing jobs to Haiti. Jeans made at this factory can be shipped to the U.S. duty-free.

In the United States, an unemployment rate nearing 9 percent is serious cause for concern. In Haiti, 19 percent would be a cause for jubilation.

In the Western Hemisphere's poorest country, employment as Americans know it barely exists. Statistics are difficult to pin down for the Caribbean nation, but some estimates put Haiti's unemployment rate as high as 70 percent.

Haitian political leaders and businessmen are hoping that trade legislation passed by the U.S. Congress last fall will be the engine for tens of thousands of new jobs. The trade incentive, called HOPE II, allows Haiti to export most of its manufactured goods to the U.S. without paying tariffs. That includes products that are assembled in Haiti from parts or materials that are made in other countries.

"No other country has the opportunity to do that," says Georges Sassine, the president of the Haitian Association of Industries. "You bring all your raw materials into Haiti, transform them into garments and whatever, and come into the U.S. without paying duty. For jeans, for instance, it's a 32 percent savings."

Sassine says the prospect of cheap labor and duty-free export to the U.S. has attracted the attention of foreign investors, especially garment-makers from Asia.

But for now, on the streets of Port-au-Prince, the country's teeming capital, life without a job is an all-day, every day scramble to turn something — anything — into money or barter. Men and boys dodge the crawling traffic, wiping down moving cars in the hope of making a few coins.

People line the streets to hawk mangos and fried plantains, plastic water bottles refilled with juice, phone cards, hand-me-down baby clothes — anything that can be sold or traded with people as poor as themselves.

"A catastrophe," exclaims Ilfere Paris, a street cleaner, describing his life when he did not have work. With a wife and four kids, he had nothing to feed them.

Haiti has no social safety net, no unemployment insurance, no state-supported health care, no food security other than that provided by foreign relief organizations such as the World Food Program, the Red Cross and CARE.

In a place where destitution is the norm, Paris has what is considered a good job. He is part of a blue-capped crew cleaning refuse from the streets of Carrefour-Feuilles, a hillside slum in Port-au-Prince. The men shovel furiously amid the reeking garbage, conscious that a lot of people on the crowded streets around them would gladly take their places.

It is hot, filthy work, but only four hours a day, for which Paris earns 111 gourdes, or about $2.75. That is $1 more than Haiti's minimum wage, which has stayed at around $1.75 for 20 years. Parliament recently agreed to more than double that to $5 a day, but the law is not yet in effect.

The job is part of a project sponsored by the United Nations Development Program. To make employment available to as many people as possible, Paris' crew must share the workload with another group, working one month on, one month off. The rest of the time, he returns to the streets to hustle a living.

For workers lucky enough, there are jobs at the neaby JMB mango plant.

Workers in blue JMB T-shirts are on their feet all day, eyes and hands moving fast to sort the green fruit and pack it carefully so it doesn't get bruised on its way to markets in the U.S.

Families Can Afford To Send Only One Child To School

Bernard Craan, an executive at the Haitian-owned company, says the wage for these workers is about $3 a day. "It is not a very well-paid industry. It is very labor intensive, and most of them work only six months a year," he says.

To get by in Haiti at that rate, Craan says, takes the earnings of two working parents, and even that doesn't go far. "They can have one hot meal a day with that – I'm speaking of the family. They are paying their rent, and they can, if they have four kids – which is the average per family here, they can send one to school and the three others cannot go to school. This is the reality," the executive says.

Craan says he is not proud to be paying that rate, but he also cites the cost of doing business in a country with unreliable electricity and truck-destroying roads. The labor has to be cheap to stay competitive, he says.

"In order to improve it, we have to increase our GDP; we have to export more. We have to create more enterprises, more jobs," he says.

Showing off an example of economic development as a result of the new U.S. law, Sassine takes visitors to a jeans factory at a Port-au-Prince industrial park to see an assembly line that started up in January.

Pending publication of the new minimum-wage law, Sassine says, workers here are making a minimum of $3 a day. He notes, however, that the pay is based on piecework, and he says a skilled operator can make at least twice that much.

An Open Door For Sweat Shops?

The sight of rows of workers bent over their sewing machines, assembling jeans that they could not afford to buy, raises a question: Will this legislation open the door to the kind of sweat-shop manufacturing that exploits desperately poor people?

Union leader Paul Chery, a big man known as "Lulu," says that is a worry. But in a country with overwhelming unemployment, the unions' concerns are for jobs first – jobs of any kind. "HOPE II supporters are saying that within 10 years, they could bring in 50,000 jobs. We think that's good, but not nearly enough for what we need," he says.

Chery, who represents labor on the Haitian presidential commission on HOPE, points out that the U.S. law contains provisions designed to protect worker's rights, including their right to join unions.

Prime Minister Michele Pierre-Louis says Haiti desperately needs the jobs that HOPE II can provide. "Haiti will not develop with international aid, no matter how much we need it today," she says. "It's investment, private, whether it's Haitian or international, that will create jobs."

Pierre-Louis says parliament's decision to boost the minimum wage now was bad timing, when the Haitian government is trying to lure foreign companies to set up shop.

But she says the government can do more on its own to be business-friendly, including cutting bureaucracy and reducing fees for companies that are willing to bring jobs — even low-wage jobs — to Haiti.