Accessibility links
A Weekend Spent 'Up' In The Sky Or Down In 'Hell' It's a double feature from critic David Edelstein, who says Pixar's sublime new film Up reaches heavenward, while Sam Raimi's deliciously gory Drag Me to Hell crawls in the opposite direction. 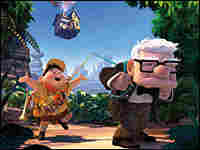 Up, up and away! A pesky but well-intentioned 8-year-old (Jordan Nagai) and a 70-something curmudgeon (Ed Asner) find adventure — and a surprising connection — in Up. Disney/Pixar Studios hide caption 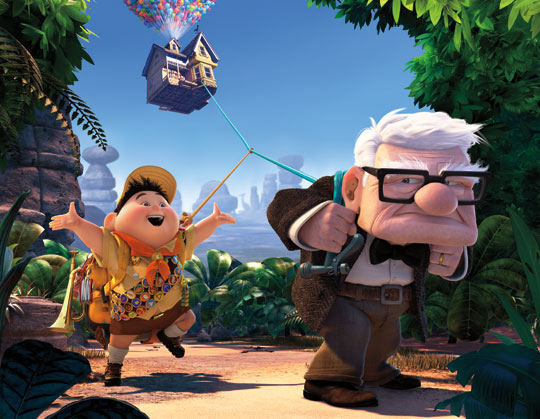 Up, up and away! A pesky but well-intentioned 8-year-old (Jordan Nagai) and a 70-something curmudgeon (Ed Asner) find adventure — and a surprising connection — in Up.

'Go Toward The Light' 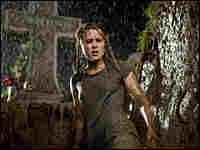 When It Rains, It Pours: Christine Brown (Alison Lohman) finds herself the victim of a gypsy curse after deciding not to extend a home loan. Universal Pictures hide caption 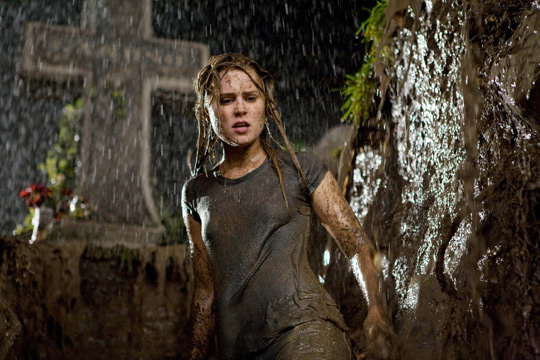 When It Rains, It Pours: Christine Brown (Alison Lohman) finds herself the victim of a gypsy curse after deciding not to extend a home loan.

From 'Drag Me To Hell'

'Soon It Will Be You'

The contrast is irresistible. In this corner, a Pixar 3-D animated feature with a thrust defiantly heavenward; in the other corner, a Sam Raimi gutbucket-horror picture crawling the opposite way.

And so we have Up and Drag Me to Hell. I love 'em both. Think of this review as a Spanish sentence: One exclamation mark points up, the other down.

That's not to say that Up is all sweetness and light. In fact, it's Pixar's way to open a movie with a grim shock, like the predator in Finding Nemo eating the fish hero's wife and kids, or Wall-E's trash heap Earth.

Here, director Pete Docter quickly lays out the lives of Carl and Ellie Fredricksen, bright-eyed kids with a spirit of adventure who marry and discover they can't have children.

They age; she dies; he's alone in the house amid rising skyscrapers. Things hit bottom when the old man, voiced by Ed Asner, bashes a contractor and elicits blood — blood, in a cartoon! — and is sentenced to finish his days in a retirement facility.

When he escapes by ripping his house from its moorings with the aid of an immense tutti-frutti bouquet of balloons, high-tailing it for a fabled South American waterfall he and his wife always dreamed of, our sad hearts surge.

The first half of Up is all demented free association, with a dream logic both baffling and hilarious. The second half is inventive but more formulaic: a riotous Jules Verne-style melodrama with a villain voiced by Christopher Plummer at his most suavely sinister.

Mostly, this is the story of Fredricksen and Russell, a roly-poly boy scout caught on the porch when the house lifts off, who irritates the old man as they pull the house and balloons toward the falls. We know Fredricksen will eventually assume the role of surrogate dad, but Asner has perfected this growly-curmudgeon persona: His tender heart will never be on his sleeve.

The look of Up is simple as only artists with a genius for complexity can achieve. The characters vaguely resemble Cabbage Patch dolls. Fredricksen has a big square head and big square glasses and a big round nose: the geometry is basic, the impact startling.

By all means, see Up in its 3-D incarnation. The cliff drops induce vertigo, and the scores of balloons — bunched into the shape of one giant balloon — look pluckable as berries.

Drag Me to Hell is like 3-D without the glasses: Demons leap into the screen while their shrieks cut right through you. This is a delicious old-fashioned scare picture, one that gets right to the point and drives it singlemindedly home.

The heroine, Christine, is played by Alison Lohman, who has the look of a washed-out B-movie blonde but a tremulous soul all her own. She's a loan officer with a good heart — but alas, when she's desperate for a promotion, she turns down a plea for more time to pay from an old gypsy woman with a glass eye.

The horror here is born of economic desperation — and after much screaming, clawing and emission of bodily fluids, Alison winds up with a hellacious curse on her head.

Director Sam Raimi began his career making gory, goofy shriek shows like The Evil Dead before graduating to more conventional thrillers and finally Spider-Man. Welcome back to the grindhouse, Sam: We missed ya'!

In Drag Me to Hell, he proves he's a master comic-book director. His frames have the punch of the best panels: kinetic, hyperbolic, manic; you almost hear a cackle under every cut.

Above you, below you, beside you, even inside your head, it seems, comes the moaning, hissing, screaming, gnashing of demon teeth. If Up suggests that balloons are a natural for 3-D, Drag Me to Hell proves that seances kill in surround-sound.